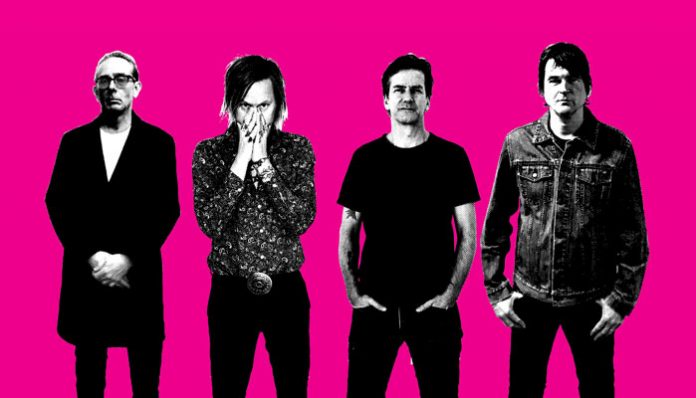 With a resume including stints in culturally defining outfits such as Minor Threat, Dag Nasty and Bad Religion, Brian Baker has his name etched into the veneer of punk-rock history. The guitarist has absolutely nothing to prove to anyone. However, Baker is always up for a moment to hold a guitar and hang out with his friends. And that was the sole purpose behind Fake Names, the band he formed with longtime bestie Michael Hampton (S.O.A., Embrace, One Last Wish), bassist Johnny Temple (Girls Against Boys) and their not-so-secret weapon, Refused/INVSN frontman Dennis Lyxzén.

Here’s an idea. Imagine an artist being put through any kind of massive music-industry machine. Everything from acquiring top managers to expensive studios to courting expensive record deals. Just fucking going for it. Now think of all that and apply the opposite to Fake Names. Baker just wanted to write songs and play guitar with his friends. He didn’t care about trends, what the new hotness was or anything else. He enlisted the dynamic Lyxzén on a trip to the catering area at Riot Fest. Fake Names’ debut album (out May 8) is a straight-up record whose DNA is a double helix of no-nonsense rock fueled by strident lyrics. Nothing about Fake Names is contrived in any way. And it simply burns.

Baker spoke to AltPress about the incredibly casual way the band formed and how the stars seemingly aligned to make it happen. It’s a reminder that sometimes the universe falls into place magnificently.

Fake Names is an interesting record. I’d almost describe it as, “What if Bruce Springsteen was cool?” There’s a call to arms, a sense of rebellion, a call for people to seek their own enlightenment. It also has a vibe of strident guitar rock, hence the Springsteen reference. There’s something familiar to it, but there’s also a contemporary urgency to it.

BRIAN BAKER: [Laughs.] I’ll take that as a compliment. I think the familiarity of it comes from Michael and I, who have been friends forever. There’s more than a little bit of Embrace and Dag Nasty in the instrumentation of what’s going on. The recording is pretty retro, as well. The way the guitars sound and the way the thing breathes. But the relevance comes from Dennis. Dennis is an activist, and he doesn’t sing about bullshit. That’s why it’s an interesting pairing for us. I’ve been friendly with Dennis. But when the opportunity came up to work with him on this, I thought, “Well, this is the perfect thing to just get some old friends from Dischord Records to make a grown-up Dischord record.”

How’d you enlist Dennis in the first place?

Oh, it was completely spur of the moment. Johnny [Temple] was playing Riot Fest 2016 with Girls Against Boys. I was playing with Bad Religion and Beach Rats that day. And Refused were playing that day. And Johnny and I both know Dennis from being around. I think we were just walking toward catering and ran into Dennis. “Hey, what’s up? How’s it going? We’ve got this band. Would you consider giving it a listen and see if you’d want to sing?” “Sure!” Honestly, it was that simple.

There weren’t lists drawn up. We approached Craig [Finn] from the Hold Steady. He was amenable, but he was incredibly busy because he works all the time. We approached Ted Leo, who was our initial [choice]. His was more of a combination of a lack of availability and I believe underlying disinterest. [Laughs.] But we knew we needed a singer. We ran into Dennis that day, and the lightbulb clicked. It’s been great. Who doesn’t want a Swedish rock star as their lead singer? He’s serious about stuff, and that’s how it happened. We sent Dennis a lot of music, and Dennis wrote a lot of words. And when we recorded these songs, we moved them around to fit what Dennis wanted to say.

We were making demos, and our very good friend Geoff Sanoff works at Renegade Sound, which is Little Steven’s spot. We could get in and get some budget studio time when the studio was dark or [when] someone would cancel. Michael is a composer, and he has a lot of production experience. He was generating a lot of sophisticated Pro Tools stuff. So when we actually got a chance to go into the studio [imitates Cockney British accent], there wasn’t any messin’ about, y’know? [Laughs.] They were just demos to us.

What made Brett Gurewitz want to add Fake Names to the Epitaph roster?

Bad Religion were recording Age Of Unreason at Sunset Sound. Michael had sent me some mixes of what we had done. I played them in the studio to hear it through the good speakers, and Brett [Gurewitz] was like, “What’s this?” I told him it was a band I’m doing with Dennis and Michael, and he said, “That’s really cool.” I said, “Thank you” and didn’t really think anything of it. We had gotten to where we had recorded this stuff, and Michael and I said, “We should get someone to put this out.” We got some positive responses from some smaller labels. And I said, “I’ll just send it to Brett, see what he thinks.”

Read more: Bad Religion and Alkaline Trio are cancelling their tour so fans get refunds

So I sent him the whole thing. He called me back and said, “This is fantastic. I would like to put this record out.” I said, “Well, that’s really cool. But these are just demos.” And he says, “No, this is the record.” It came out of the blue: I was surprised Brett was excited about it and was flattered that he thought so much of the recording Michael and Geoff had done. It also made for a really easy record deal, as we already had the product. So we decided to do it with Brett, and that’s what brings me to this phone call. It’s been a product of being a billion years old and knowing all of the same people. [Laughs.]

But it doesn’t sound like a bunch of middle-aged punk guys reclaiming some glories. Or “reinventing” themselves to the dictates of the marketplace. It’s very on point.

But it’s the aesthetic. We’re the kind of guys who, the kind of music we came up on—at its extremes, it’s Discharge—but when you think about a lot of late-’70s, early ’80s stuff, it’s really just clean and simple. It doesn’t have a lot of shit on it. Michael and I love that stuff. Very few effects.

In some aspects, Fake Names are a time machine, but it does sound very contemporary. And not some kind of cover band throwback. I’m not being pejorative when I say Fake Names are accessible…

When we wrote these songs, they weren’t written for a voice. It was for two guys who play guitar. I live in New Jersey now, and Michael lives really close to me. This is a guy I’ve known since first grade. It’s so easy. “I’ll drive up, we’ll have lunch, we’ll play guitar.” This started as cool riffs and things that reminded us of what we liked.

The music was written apart from Dennis—who is a straight-up fucking revolutionary. Actually, there were a few songs where Michael and I were like, “Well, this is a nice pop number. I wonder if the reference to a multinational death corporation is going to turn off anybody.” Dennis came at it at a completely different level and a completely different mindset than us. And we’re smart enough to realize that was great and to not change that. That’s where you’re getting your impression of the record. It’s the first thing that you described about it, and I knew what you meant. I really, really wished we were playing shows right now.

That might be the only thing Fake Names have in common with other bands. Were/are you planning to get Fake Names in front of people?

Oh, it was 100% commitment, based on Refused, Bad Religion and INVSN schedules. Dennis had a three-week break. We were going to play a record-release show at Rough Trade in New York, do D.C. and L.A. I really want to get Michael on a stage soon. Although he’s the same age as me, he’s always been a big influence on me. Michael and Captain Sensible. Michael’s been a composer, and he hasn’t been playing live for 20 years.

It’s like, “It would be fun to get Michael onstage. It’ll be fun to play some shows. Let’s write some songs. Maybe we’ll get a singer.” It was a very non-take-over-the-world attitude. Fake Names were just trying to do something simple, something that would give me great pleasure [Laughs]. When live music becomes something people can enjoy again, we’re going to play as much of it as we can.