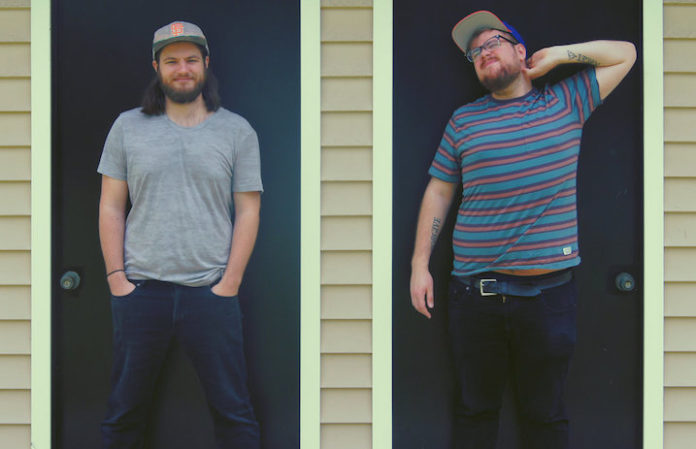 Before the disbandment of pop/punk indie four-piece Reckless Serenade, vocalist Cory Brent and guitarist Will Prinzi found themselves on the road together while the band was on Warped Tour last summer. Prinzi opened up his laptop, double-clicked on Logic, and the creative juices started flowing. “We'd bounce ideas off of each other to stay awake,” Brent says. “The music we kept coming up with was super different sounding for us, so we sort of took it and ran with it.”

Following Warped Tour — and Reckless Serenade's break-up — the two ended up recording the entire EP in their apartment. And thus Broken Bellows was born.

“Will and I had written music together since our freshman year in college,” Brent continues, “so we've always been on similar frequencies with one another.”

The result of their collaboration is The Card Table — a beautiful, genre-jumping EP out Aug. 25 on Fervor Records. It's delicate and light, and yet simultaneously heavy and emotional. In just five tracks, Brent and Prinzi take you on one hell of a ride. Take a listen for yourself:

Reckless Serenade’s break-up might have led to a new project for Brent and Prinzi, one they’re clearly proud of, but the road to Broken Bellows wasn’t always an easy one. In our interview with them, Brent and Prinzi talk about the disbandment, the influences for the EP (Twenty One Pilots being one of them), how the name Broken Bellows came about and more.

Who were your influences for the new EP?
Cory Brent: There are always a million influences that go into things like this, but I'd say, sonically, Borns and Twenty One Pilots were definitely two of our bigger influences. Borns just has that huge sound to him, and I feel like that's something we've tried to capture on a few of our songs.

Describe the EP in 3 words.
Brent: Tall, blonde and handsome

What do you hope listeners get from this EP?
Brent: We really hope that anyone listening to this EP can appreciate how different every song is track to track. I think we really messed with several different genres, and I think each song has something to offer to everyone.

Why the name Broken Bellows?
Will Prinzi: Broken Bellows was a lyric from a really old song of ours that never saw the light of day, though it has always been one of our favorites. It's all about overcoming challenges by finding the light in any situation, starting the spark yourself even though you're working with “Broken Bellows.” After Reckless Serenade broke up, there was some mourning going on, but we were also free to start our own project; and we found that through this new music, so much joy and inspiration came about, all from something being destroyed. So we really credit our whole existence as a band to that sentiment: an opportunity for a spark in any obstacle.

“We found that through this new music, so much joy and inspiration came about, all from something being destroyed.”

Which song on the EP is the most personal to you? And how?
Prinzi: The song “Waiting” is very personal to me, it came about in a time from last year when I was feeling very lost.  For me, it’s about this strange feeling that something terribly important is missing from your life but you’re not entirely sure what it is, and it leaves you feeling incomplete and just… lost. It was just a moment of my life from the spring of last year, and I have since moved on, but it is forever captured in that song; it has a certain catharsis when I listen back to it, and I hope the same is true for others that hear it.

“If you like waking up and giving yourself a lil’ wink in the mirror with a finger-gun-while-making-the-clicky-gun-noise, then you’ll fer sher love Broken Bellows.”