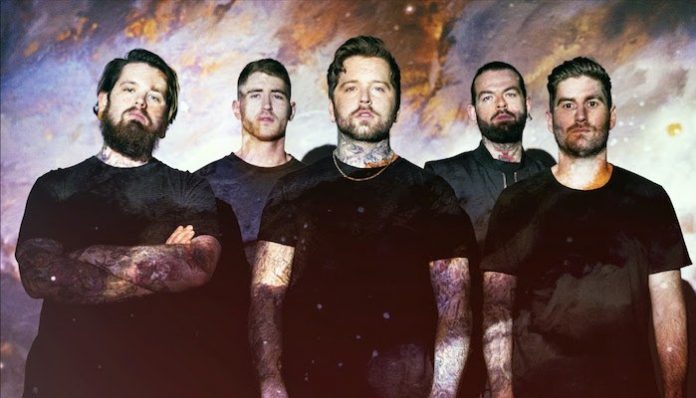 Planning an album release in April 2020 was a purely innocent decision for Bury Tomorrow, but the state of the world had other ideas. Forced to postpone dropping their sixth effort until July 3 due to the ongoing pandemic, the Southern U.K. metalcore ballbusters have held on to their new guise long enough and are practically bursting to unleash Cannibal into the chaotic realm around them.

Following up the towering success of 2018’s Black Flame was always going to be like squaring up to a colossus, but thanks to a few subtle changes to their approach, an entirely new and very personal subject matter and a closer connection between each other as bandmates, Bury Tomorrow are taking the challenge head-on.

Read more: 18 hardcore and metalcore bands you probably forgot from the 2000s

Confronting the topic of frontman/unclean vocalist Daniel Winter-Bates’ battles with mental health in recent years, Cannibal picks apart the emotion and trauma involved with being at war with your own mind and wades in with a generous helping of their signature devastating metalcore to create an album that sounds equal parts mosh-worthy and thought-provoking.

With this altered angle in mind, we spoke to the mastermind behind their new concept to find out just how much Cannibal differs from Bury Tomorrow’s back catalog and how the writing process for their 2020 output brought the songwriters closer together.

How gutted were you about having to postpone Cannibal’s release?

DANIEL WINTER-BATES: When you’re in a band, you just want to play shows and release albums when they’re supposed to come out or earlier than they’re supposed to—we’ve had both of those thrust upon us. We’re desperate for people to hear it, but we’ve been lucky enough to release quite a few singles pre-release. I’m gutted it couldn’t be in the way we wanted it, but it is what it is. The time you have sitting on it after you finish an album is always the worst part, but because this time has been elongated, it’s been a bit more stressful. There’s always a niceness to the fact [that] everyone’s in it together, so there isn’t that feeling that we fucked up and we couldn’t release it. It’s out of our control, so you wash your hands of it slightly.

How did Cannibal first come into being?

We had a really great campaign after Black Flame. We had the first Black Flame tour, which was the big one, and that connected on a different level for us. It thrust us into an opportunity where Germany and Europe were as big as the U.K., which is something we never expected after being in a band for 14 years—we never thought we would have hype again. We just trundle along doing our thing and making sure people like it, and we’re getting bigger every time we release, but this [rapid] rise in certain markets was really cool and fun to see.

We had a great festival season, and from then on, we were writing Cannibal. We’re always writing 24/7, finishing an album and making sure we have demos in the pipeline for the next one, so we started knuckling down into the writing process in the summer after Black Flame, then headed into the studio around October.

Black Flame was such a storming success. How much pressure did you feel to raise the bar this time?

There’s always a certain degree of pressure that the bigger you get, the harder the fall will be, so you put that in your brain as a possibility that this could all be taken away with a terrible release. In reality, that’s not really the case because we don’t take humongous risks with our music, and I don’t think it’s appropriate for us to do so. I think our fans like the music we make, so if we were taking a huge divergence in what we play or what genre we do, we’d be doing a disservice to the people that have stuck with us for all this time. In that respect, we had a bit of confidence going into this next record.

We always want to push ourselves musically and lyrically, and the minute Cannibal started taking shape as an album that’s really focused around my mental health and had such a personal connection, it took the pressure off slightly from a musical or grandeur perspective, but that inherently gave it a different kind of pressure trying to connect with people on an emotional level.

How did the writing process change between you and the rest of the band?

While we were writing, Jason [Cameron, clean vocalist/guitarist] had to get massively in my mindset, which is a really hard thing to do because we’re basically brothers. We’ve known each other for 11 years of our lives. We’ve grown up together, so from his perspective, I was almost hiding stuff from him. He didn’t know the levels of where I got to mentally, the depths I went to, and he [shouldn’t]. Sitting down and having a really structured writing process where I had to go through every song’s meaning with him and where I was in my life when I was feeling that way, that really helped him connect and progress vocally. There are some takes in there that chill me to the bones because they’re so on the money. It might as well have been me singing them. It was crazy how much he nailed it.

Read more: 20 black musicians throwing down in hardcore and metalcore

How would you compare your performance on this record to your past albums?

People have always told me I sound better live, and albeit that may be something you want to hear, it’s also something you don’t want to hear because you just want to be a vocalist and do your own thing. There’s something really raw about the emotion in my vocals this time. We did it really differently for Cannibal because I recorded on the same handheld mic I would use live, so that added another level of realism to it.

As far as the aggressiveness and visceral nature of how my vocals have come across, especially on things like “Choke” and “The Grey,” it’s gone to another level without deviating from Bury Tomorrow’s sound. I think Black Flame got very close to that. Earthbound was up there too because that was a very raw album as well, but there’s something about Cannibal that’s just me, and you can hear the emotion. You can almost hear my voice behind the screams this time. This is the first album in my entire career where I can listen back to it and honestly say I wouldn’t change a single thing.

Which track means the most to you personally?

For me, “Dark Infinite” is the jam. It sounds like me when I was a kid listening to metalcore, and still to this day, it’s the one I can see Bury Tomorrow fans worshipping more than any song on the album. When it comes to something different and what I’m proud of, I’d say “The Grey” because listening back to that was one of the proudest moments I’ve ever had in this band. There’s something about the feel in the chorus, the space in it where you can feel emotion. We’ve been guilty in the past of sticking a breakdown into emotional songs just for the sake of it, but there’s something about how “The Grey”’s breakdown blends in perfectly.

I’m a bit biased because we’ve played it live, and it’s the song that’s emotionally connected with people the most in [the] 14 years of our career. We’ve spent five albums getting people to feel the natural go-to reaction to metal of “I love this song so much, I’m gonna jump to it or wall of death to it.” We’ve never really written for the “stand there and feel something, connect with everyone else in the room” kind of reaction. When we came out with “The Grey,” I knew that was it, and the rest of the album slotted into that same kind of structure, which I think is great.

The artwork for Cannibal looks iconic already. It’s a nice return for you. Where did that come from?

We knew we hadn’t had artwork for a while. Our first album, Portraits, [included artwork. The Union Of Crowns was a crazy collage artwork, then it went to a symbol with Runes, then back to artwork with Earthbound and back to a symbol with Black Flame, so we knew we wanted to put artwork back in. Black Flame was really simple but on purpose. It was meant to be that sigil that connected on a different level. This time, we went, "Let’s go for full-on artwork. We don’t even need our name on it. We just want the artwork to do the talking.”

There’s an artist called Nightjar who’s done a few metal bands before [Fit For An Autopsy, SPELL, Hath]. We talked to him about what the album was about, what it feels like, and legitimately that is the first thing we got back from him. I think it says everything about Cannibal. From my perspective, it’s almost like The Scream painting—a bit of terror, unknown as to what’s going on. Then when you listen to the album, it all makes sense.

10 times we should’ve seen Bring Me The Horizon’s heavy return...

Machine Gun Kelly just figured out the meaning of this blink-182...

Hear Kellin Quinn team up with Words Like Wildfire on “Shake...

It looks like a ‘Bird Box’ sequel is in development at...