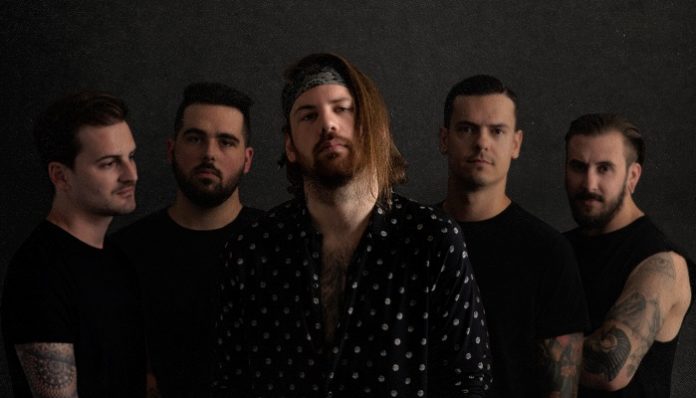 Beartooth are sharing a music video for new track “Disease,” off their upcoming album.

Watch the music video in full below.

“It was a pretty wild process getting this video together,” says Caleb Shomo, founder of furious metalcore monolith Beartooth about the clip for the title track of his band’s anticipated third album, Disease. “Filming started at noon and ended at 11:30. Pretty good compared to when we shot ‘Beaten In Lips’ and I didn’t leave the the set until 6:30 in the morning the next day.”

The clip was lensed by director Drew Russ, who has worked with the band on previous clips including “Lips,” “In Between” and “The Lines.” Shomo says the project came together quite quickly. “I wouldn’t say it was last-minute, but we were able to put it together in five days or so. We feel Drew has done our best videos. He really understands us really well. I don’t know: [the clip] is not too much about having a plot as much as it is capturing an emotion. There’s lots of paint, blood, I’m dying… it gets pretty dark.” He starts laughing. “It’s a pretty cool video!”

It’s the opening salvo from Shomo, who is following up 2016’s Aggressive with heaping doses of both heaviness and melody. For Disease, Shomo worked with producer du jour Nick Raskulinecz (Deftones, Korn, Foo Fighters) at his Rock Falcon Studio while Shomo tracked at Black Bird studio in Franklin, Tennessee, to craft the album’s 12 songs. Shomo says Raskulinecz helped shape the album, being very hands-on regarding what songs would be used and focusing the proceedings for Shomo to launch from.

“He’d say things like, ‘This song doesn’t hit hard enough. Let’s layer up some guitars.’ Honestly, Nick really fuckin’ brought this thing home. He told me to be confident in my decisions, not to worry about it and make the best record that you can and stop thinking about anything else. And that really helped shape the album.”

Given the amount of sonic depth on display on Disease, one could only guess at Shomo’s motivations. While there are more melodic detours than previous releases (“You Never Know,” the title track), there are moments where the energy goes peak-red maniacal (“Bad Listener”), as well as intersections where both worlds converge at once. (“Greatness Or Death,” “Fire”). Which should make listeners wonder if Shomo’s flexing his songwriting abilities or if he’s creating a sonic photo album of what he’s been experiencing over the past two years.

“I would say sonic photo album is the best way to describe this record,” he opines. “I came up with the title and the whole concept in December of 2016. Realistically, I’ve been sitting on the idea of this album for a year and a half. I wrote the song ‘Disease,’ about a month or two later? From there, it was really a process of taking all those songs of written over that year and a half and within two months, kind of like really narrowing it down and deciding what would fit best all together. This is the first record I made with a ton of time, and I think it shows because there’s a kind of spectrum to this record.

“There are songs where I was kind of more in a chipper place, where I was feeling more melody-driven or just flat-out heavy metal,” he continues. “It’s a great depiction of what it’s like to make a record over the course of a year and a half. Aggressive was made in, what, two months? And I think you can hear that as well on this new record. Obviously, I don’t hate it, but I feel it lacked the same dynamic the first record had, compared to this one. I’m just glad I achieved the dynamic I was going for.”

Shomo’s original plan for Beartooth’s third album was to record several tracks in various cities all over the world where his label, Red Bull Records, had studios. The rationale being that the different environs would inspire the recordings in ways working at home in Columbus or under a high-powered personality like John Feldmann (who co-wrote some tracks on Aggressive) couldn’t convey. Sessions in New York City, LA and Japan did go down, but it was still in the nascent stages of the writing process of the songs.

“I always write songs in a basement in Ohio for every Beartooth album,” says Shomo. “I figured what was the hurt in trying to write in some nicer studios, setting up a bunch of cool gear and instead of writing on a computer, writing it on the fucking instruments? I was playing the drums instead of programming them and then playing them later. Not using digital amps and digital pedals. Just making the creative process a little more raw. I think it brought a little bit more out of me and a little bit more excitement for writing out of me. Just actually being able to beat out the drum parts and hear an amp cranking in the other room. It really helped it become a little more unique.

“For this album, it was important that it sounded real,” he stresses. “At least I gave it my fucking best shot and did as much as I could before doing any digital editing or touching it up. A lot of my favorite records are about the sounds of those records: being able to hear the buzz of the guitars and being able to hear guitars being played in the middle of the fucking room. It gives it an energy you cannot capture on a 100-percent digital recording. And I wanted to see what it would be like to record a Beartooth album that way, and Disease is what we got.”

Not surprisingly, Disease is a malady worth catching. The album finds Shomo exploring possibilities both whiplash heavy and unapologetically anthemic. When he runs down the details on how this album was made, you can feel both his enthusiasm and his relief that he finally got through making the thing. Shomo employs the title Disease as a metaphor for mental health issues and how that discourse is being addressed.

“The biggest moment that brought it together was one day when I was driving home through Nashville,” he begins. “I had to go home for a weekend, only a couple days. I was with Oshie [Bichar, bassist] in Nashville, and we’re listening to all the songs. We were talking about what songs made sense to him and trying to get his opinion on it. He reiterated something to me that somebody else told me earlier. He said to me that ‘Beartooth should be this inner monologue of the real struggles that you’re going through.’ I believe it was right after I recorded the closing song, ‘Clever.’ Going in to write that song, I was fucking pissed again. I hit this wall and just snapped, like, ‘Man, I am so sick of writing these fucking super-depressing songs and talking about all this shit that’s really deep inside me that I don’t feel like dealing with.’

“And I really didn’t consider the perspective that was what Beartooth really is,” he says, catching himself. “What makes a Beartooth album good is that I am willing to go to these places that I don’t want to go to myself and create the inner monologue. That’s what people relate to and what they connect to. That moment shaped the decisions of what songs to use. There were songs we didn’t use simply because of the subject matter. But that’s the point: capturing those dark inner moments. That was the biggest eureka moment making this thing.”

While Shomo is rightfully proud of the work he’s created, he does recognize that the failure to negotiate those thoughts on the road is real. Much like Every Time I Die’s Keith Buckley having to daily revisit all the personal fear he felt creating the emotionally cauterizing tracks on Low Teens, Shomo’s willing to rip the psychic bandages off open wounds nightly when Beartooth heads out on tour this fall.

“You’re very right in many ways,” he acknowledges. “This is the first time in a while that the lyrics have meant so much to me that I’m going to feel uncomfortable playing them live. That brought me back to realizing why I do what I do.

Disease is released by Red Bull Records Sept. 28. You can preorder it here and watch the music video below: