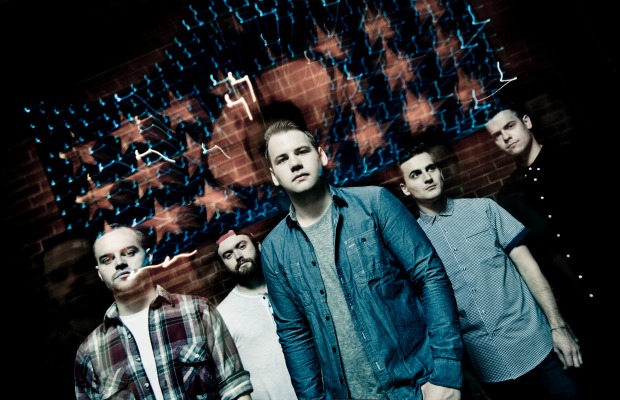 He may be just old enough to legally drink alcohol, but Caleb Shomo has quite the impressive musical resume that includes singer, songwriter, guitarist, bassist, drummer and producer. The 21-year-old former vocalist/keyboardist of Attack Attack! is about to release the debut full-length Disgusting with his band Beartooth, which he started in late 2011 with guitarist Kamron Bradbury, bassist Oshie Bichar (both formerly of City Lights), guitarist Taylor Lumley and drummer Brandon Mullins.

“Know that when you’re listening to the record, I was just coming from a place sitting alone, writing songs to get my head on straight. I’m not trying to write songs to change the world,” Shomo says. “This band is just me being honest with myself. I put in a whole lot of effort and time and more honesty and emotion than I’ve ever put into a record. I’m super-excited for people to hear that and for people to understand where I’ve been in the last year.”

Stream their new song “Beaten In Lips” below and check out our exclusive interview with Shomo to get to know Beartooth.

This is an exciting time as it’s the first full-length for Beartooth, and although your band members are listed as a unit, this record is really your baby. You did all the singing, production and instrumental work on this record. What’s that process like?
SHOMO: I’m insanely excited! I’m also a little bit nervous to put it out because I put obviously so much into it and mixed it and everything. When it comes to creating songs and developing the record, I’m the only one who has anything to do with it. That’s how Beartooth started: me making songs by myself. I have a band live, and everyone is of equal importance. I just make the songs on the record.

Is it challenging to switch gears in the studio and wear so many hats?
I’m pretty scatterbrained, honestly. There’s not much organization. For Beartooth, whatever I feel like doing in the moment, I’ll do. Sometimes it starts with lyrics or a melody in my head or a guitar riff or something else. I just go downstairs and lock myself in my studio until I’m happy with [what I’ve recorded], and then I call it a day.

What’s your favorite part about composing and recording music, since you own all aspects of the creative process?
I love tracking the guitar. It’s really fun for Beartooth. It’s played a very specific way, and I kind of just let it happen. I really don’t edit the guitars. I hit “record,” do the take and leave it that way. That’s Beartooth. I just let it happen. I want all the mess-ups and little dynamics that make it feel like an honest album. I love tracking guitar because I’ve never played guitar in a band. It’s one of the first things I learned to do and I always wanted to do it. It’s fun to at least be able to track it.

The focus of the record is rooted in a lot of pain and heartache that anyone can relate to at some point. Was this record a cathartic experience for you?
The lyrics on the record are pretty much whatever I was feeling at that moment. The whole point in the beginning of Beartooth in general was, while I was in Attack Attack! I was just in an incredibly dark place in life, and I was pretty miserable. Beartooth was my escape and my kind of therapy in a sense. I would write these songs and try and be as honest as physically possible just to get that relief for me personally. I didn’t even think it would be something I’d show a lot of people or that anyone would care about it.

I guess that makes it a little awkward, writing these personal songs, now knowing they’re going to be played to a mass audience, and more or less anyone who wants to hear them. Specifically the last song on the album, “Sick And Disgusting,” is a song I didn’t even want to put on the record. That song was so personal and vocally was really tough to listen to. I don’t ever really listen to that song at all. I hate listening to it and having to relive that moment, but at the same time it was good for me.

Last year, you closed the chapter of your time with Attack Attack!. What are your feelings and sentiments reflecting on that time in your personal career, and with that group?
It was way more fun for me in the beginning. We were just kids. I was 14 years old when I made electronic music, and we were just screwing around and made this sound, and somehow it got where it went.

It’s very taxing mentally, and it’s a waste of my and anyone’s time. Make songs because you like making songs. That’s what I do now. I could care less if Beartooth are really successful. I want to write songs that are honest songs without [the] bullshit reason of how to make a lot of money off a track. I just don’t care anymore. I’m so sick of it.

In my musical taste I’ve just grown into a different mindset. I really like music to feel organic. Beartooth are just loud rock. I don’t know what genre to call us. We’re just guitar, drums, bass and vocals; that’s it. I want to keep it that way. I don’t want to cross genres. I still make electronic music. That’s a passion of mine, and I’ve been doing that since I was a kid. But that’s a separate thing for me now. I don’t want to force two things together when I’m not feeling it.

Even at the end of Attack Attack!, I didn’t enjoy putting the electronic [music] to it, it was just like, “Well this is what it needs to be because this is what the band sound like.” I stopped playing keyboard in the band after the first record, so it’s nice to not have to force anything anywhere. I just like making songs for the fun of it, and I’m glad to be able to do it.

The video content of “Beaten In Lips” is pretty heavy. What was the inspiration for writing this song?
I talk to people at shows I talk to people who tell me they’ve dealt with that, or that they deal with active abuse. It’s a pretty common thing. It’s sad. Going to shows for some people is a big release from being abused. It’s so sad and literally shatters my heart to talk to someone who’s been cutting him or herself for years and years because he or she has dealt with family abuse, or is heavy into alcohol and drugs just to bury it. That was a big inspiration—just seeing the sheer reality of it.

If it’s happening, you don’t really hear about it. It’s not something people want to talk about because they’re ashamed or embarrassed. Some sick parents make their kids feel like they deserve it, which is horrifying. That’s a very big reason I wrote the song. I guess if people are going to hear it, I’m going to tell them my view on it, straight up. If you’re an abusive person, you’re a sick person. You need to figure out what’s wrong with yourself.

You should be applauded for going there. It’s a tough subject matter. In many ways, records are our friends when we feel alone, and it’s great that you can help support someone going through that.
I’m just doing what I do. I don’t think I’m a person that deserves to be the voice of others. I guess all I’m trying to do is be honest with myself. So if people can relate to that, then I’ll be more comfortable knowing it’s coming from an honest place and not trying to be something I’m not. ALT