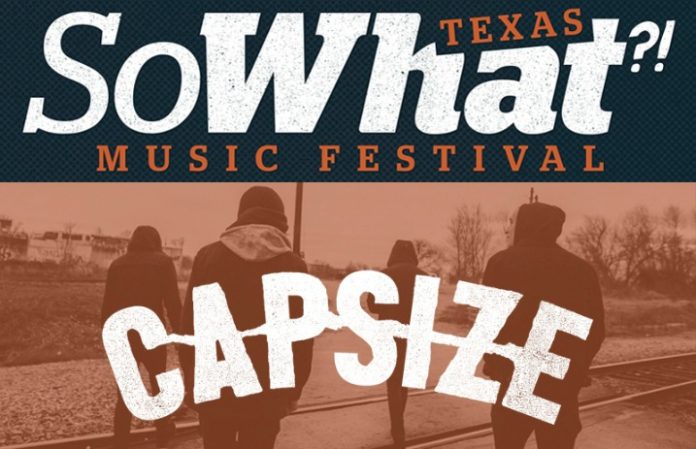 So What?! Music Festival kicks off in Grand Prairie, Texas on March 19, and ticket packages are beginning to sell out on the event’s website.

It’s not hard to understand why: This year’s  lineup is stacked. Not only does the two-day festival feature headliners Underoath and New Found Glory, but also it features Bayside, Neck Deep, State Champs, Real Friends, Beartooth and Saosin.

Daniel Wand, vocalist for Capsize, weighed in on which five bands are essential to see at the festival.

Too Close To Touch

I haven't seen them live yet, but there's no way this won't be an awesome set. This band's strong point is their huge choruses, and I definitely want to be there singing along with them. If you're unfamiliar, you should catch up on Too Close To Touch ASAP.

I've seen Being As An Ocean play time and time again—and I can honestly say it never gets old. This is absolutely my favorite track of theirs. The band's singer, Joel Quartuccio, gives it all he's got in every single set they play, and I can assure you he'll be running off the stage and in the crowd with you, jumping around with everyone. They will make sure you have a great time.

There's a good chance you're already planning on catching their set, but if not, your schedule may need some adjusting. The energy this band gives off live is matched by very very few current bands and the atmosphere their set creates is extremely fun. If you've been standing around all day, Beartooth will—without a doubt—wake you up.

I've been listening to Saosin for 10 years now and to this day, whenever I hear this song, it still makes me feel the way it did when I first heard it. Saosin is one of the main bands that got me into post hardcore and the combination of the aggressive riffing and the emotional vocal delivery creates a vibe that hasn't been re-created by many bands since this release came out. So What?! is your chance to catch them in their truest form with original vocalist Anthony Green back in the band—so get up in the front for them and you may get that feeling you had when you first started going to shows.

Unless you are being dragged along by a friend and have no idea what you're showing up to, I don't have to tell you that this is the band to watch at So What?! Returning from a break up with what I consider to be some of the most memorable songs of the mid-2000s, I would be surprised if anyone that isn't familiar with them won't have a new favorite band by the end of their set. Another band that is re-appearing in their best and purest form with Aaron Gillespie returning to his drum/vocal duties in the band. If you miss this, you've severely messed up.