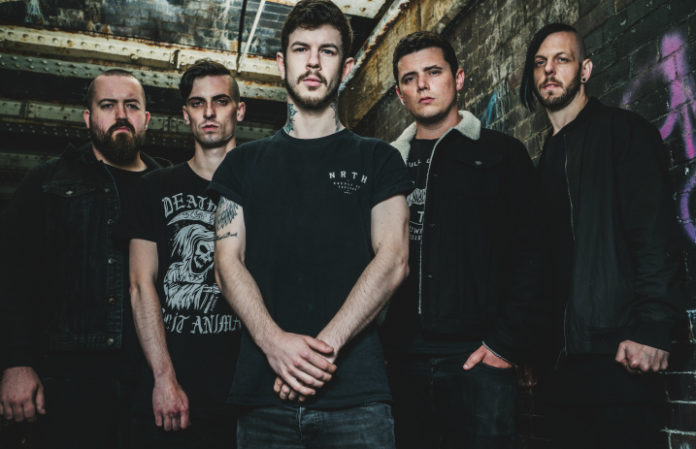 Musicians throughout the eras have done what they could to purposefully alter their reality to “hear colors and see sounds,” supposedly in the name of artistic enlightenment or consciousness expansion. Famously, the Beatles’ “Lucy In The Sky With Diamonds” and “Yellow Submarine” are pieces of psychedelic pop culture that that will never be forgotten for their bombardment of the senses and relation to drug culture. But what if you didn’t have a choice? What if your senses altered themselves?

Synesthesia is an actual condition in which the stimulation of one sense involuntarily triggers another. For vocalist Patrick Pinion of U.K. metalcore band Carcer City, it’s this unique condition that alters his perspective—and how he writes songs.

Pinion laughs nervously and scratches his head as he tries to explain his Rubik’s Cube-like brain to someone he fully expects will think he’s crazy. With the band’s new record Infinite // Unknown, to be released via Stay Sick Recordings on Sept.16, he goes through the track listing, which he very specifically arranged according to the color patterns he sees. It goes like this:

Pinion has a form of synesthesia known as grapheme-color synesthesia, which means that numbers and letters evoke various color responses from his brain. The construction of everything from chord progressions (the numbers of the frets) to track placement (the number order and title spelling) is done according to his brain’s personal number-letter to color assignment system. He even feels the need to justify—more to himself than anyone else—having two “red” songs in a row (tracks 11 and 12) by explaining that they’re two parts of the same song. This all seems very complex and exhausting, but he doesn’t even have to think about it. To him, it’s just how the world works.

“Everyone kind of justifies their own actions and their own existence,” he says, relating his condition back to the message behind Infinite // Unknown. “Everyone has their own version of the truth. There’s no solid, actual constant in the world. There’ll be other people that have my condition that will have different colors for their numbers and I’ll be like, ‘Well, that’s totally wrong.’”

Drawing influence from everything from Architects (U.K.) to film scores and world music, Carcer City create an ambient metalcore meant to guide you through these kind of philosophical questions, as illustrated by the title of the new record alone.

“What on earth are we doing here?” he blurts out. “How do we know what’s real? How do we know if we’re really in control and if we’re just a load of molecules bound by the laws of physics? If we’re truly free? What do we do in the face of potential meaninglessness? [It’s about] the problem of existence and making you think about what’s really important in life and what’s important to you personally.”

So aside from the curiosity that is Patrick Pinion’s brain, there are deeper reasons to give Carcer City and their new record a listen. “We’re making noise about things that actually matter in life,” he resigns. “We have a message and a meaning behind it. We’re more than just a band, so you should get involved and feel connected and be a part of it.”

Interested in hearing how the record sounds? The band is premiering the track “Sovereign” from Infinite // Unknown. “'Sovereign' is about the inevitability of death that will come to all of life as we know it and the problem that presents to us as mortals,” says Pinion. “How do we find meaning in a meaningless existence? Why do we get so caught up in the ultimately pointless trials and tribulations of everyday life? Why do we see ourselves as so special? 'Sovereign' is a song to remind everyone that none of this has any real meaning or structure. It's a song to remind people that in the face of death only one thing matters — enjoying the ride! Do what makes you happy.”

Check out their new track below: