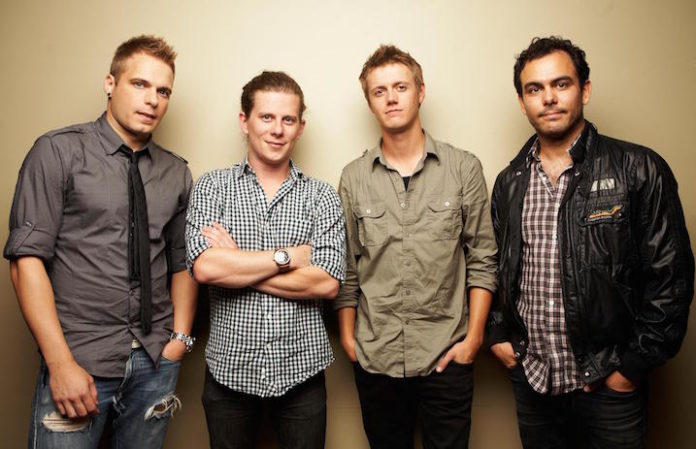 Believe it or not, Cartel’s self-titled sophomore full-length turns 10 this year. The production process for this particular album was quite unique, with the band entering a bubble constructed from glass and steel to record. MTV captured footage for miniseries Band In A Bubble while they were simultaneously under a webcam and visitor-induced microscope. Head below for facts about their time in the bubble, from the backlash to the special guests.

Read more: Will Pugh of Cartel looks back on 10 years of Chroma

We can indirectly thank David Blaine for the show’s launch

In 1999, Valve Records owner and band manager Paul Curtis concocted the idea of putting his client Regurgitator, an Australian rock act, in a bubble to record their next album. The band weren’t initially impressed, until guitarist/vocalist Quan Yeomans had a change of heart. Yeomans was living in London in 2003 when famed illusionist David Blaine sealed himself inside a glass box 30 feet above the River Thames’ bank for 44 days with only water and a webcam observing his every move. Yeomans observed the stunt and questioned how it would be if he were “doing something creative as opposed to just sitting around doing nothing.” The following year, Regurgitator became the first group to engage in Band In A Bubble on Channel V Australia, setting up shop for three weeks to produce 2004’s Mish Mash! while on display in Melbourne’s Federation Square. Endemol (the creators of Big Brother, Deal Or No Deal and more) licensed the show’s concept, and Cartel became the first (and last) U.S. band to participate three years later.

Cartel scrapped pushing singles from Chroma to enter the bubble

Cartel exploded onto the scene with their debut full-length Chroma in 2005. The first and only single was “Honestly,” which peaked at No. 89 on the Billboard Hot 100 and landed them a coveted opportunity to perform on Total Request Live in December 2006. Following the success of “Honestly” on radio, the band planned to focus on “Say Anything (Else)” as the next single, followed by “Runaway,” “Matter Of Time” or “Save Us.” Frontman Will Pugh revealed Epic Records scrapped the “Say Anything (Else)” campaign when approached about Band In A Bubble to take advantage of their current momentum. Pugh said they initially wanted to keep working on Chroma’s singles and push production on the next record to the end of 2007, but the timing wouldn’t have worked out with the bubble. While he says they weren’t necessarily forced to do the show, the label made it known they wouldn’t have been happy if they passed on the opportunity.

They were sealed in for three weeks

The band were stuck inside the bubble for three weeks, recording the entirety of the record with very little outside contact. CosmoGIRL! even conducted an interview via intercom, and the band revealed their bunk bed sleeping situation and that the sealed-in feeling actually aided in getting work done. They also used an intercom to chat with fans and had a bank-like drop where people brought them gifts and sent through things to be signed.

Before entering the bubble, Pugh revealed to The Rock Star Stories (in the video above) that they had already written eight songs for their sophomore album before being asked to do Band In A Bubble. With the new material, they were aiming for a mature sound that was more rock-oriented; but despite the preparation, they still didn’t know what they were going to call the album itself at the time of the interview.

They didn’t want to be the next Real World…

The bubble was accessible to fans at Hudson River Park’s Pier 54 and full of Dr. Pepper-sponsored webcams. Anyone with a code from the purchase of the soft drink could check up on the guys 24 hours a day. They feared becoming the next Real World, and that was somewhat legitimate, with MTV springing nonmusical stunts on them, such as cameos by the Knicks City Dancers and farm animals.

…so much so that they rebelled

One of the worst concocted moments was after a night of drinking (supplied by producers) when a fitness instructor showed up at 7 a.m. to lead the guys in a hungover workout. However, their breaking point came when MTV shut off the internet to force more band interaction. As a result, former bassist Jeff Lett spun around each camera to block viewers.

On top of those webcams, MTV created a miniseries consisting of four broadcasted episodes, the first of which aired while the band were still in the bubble. MTV allowed them to see the first episode, and to their dismay, they realized how statements could be edited to stir drama. One such example was drummer Kevin Sanders saying that not everyone will like every part of a particular song, which was edited to convey the band didn’t like any part of the record they were making. Pugh recalled that their anger at the edit caused MTV to tell them they didn’t want them to watch any other episodes while in the bubble.

Juliet Simms entered the bubble to work on “Lose It”

Before The Voice and her solo career, Juliet Simms fronted alt-rock act Automatic Loveletter. Back in 2007, the frontwoman dropped in to add vocals to Cartel’s “Lose It,” with the band telling her it was the potential (and eventually actual) lead single from the record. After checking out the track, she told the band it was “going to be stuck in [her] head forever.”