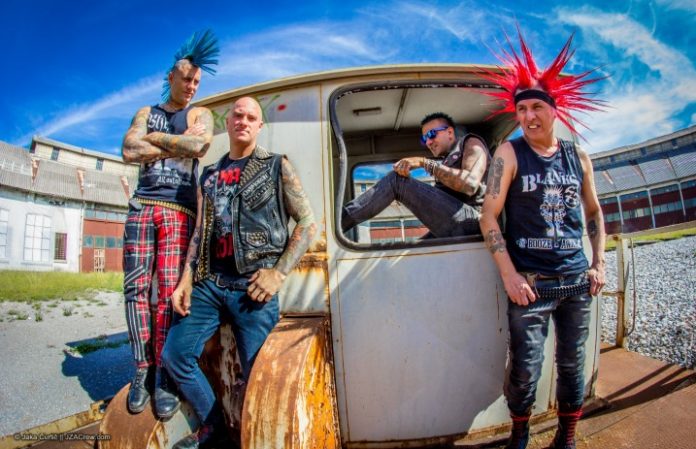 Hardcore-punk institution the Casualties return to their roots with their latest album Chaos Sound, and the veteran street punks are teaming up with AP to bring you the first stream of the new release.

Hear all 15 tracks below, and share your thoughts in the comments. Chaos Sound drops Jan. 22, but you can pre-order it here.

We caught up with guitarist Jake Kolatis via email to talk about the new release.

It’s been three years since you released Resistance. What have the Casualties been up to in the meantime? What experiences, musical and nonmusical, have shaped Chaos Sound?

Since the Resistance album we found ourselves pretty much all over the world on tour. China for the first time! Return tours to Russia, Central and South America, South East Asia—because they kept asking for us so we said “FUCK IT! Lets go!” I mean these cats wanna see us live on the other side of the world!! Meanwhile I was like “…day off in Thailand please”  (whispering request). [Laughs.] These days I still go out and drink 80 beers, but more importantly, I wanna see some culture. Some bands get it, and others just see a hotel room. Yeah you were there, but… did you taste it? I mean, you might as well get your road dog on and see as much of this planet as possible!

Speaking of Resistance, while you were in the studio making that record the cops showed up. Any run-ins with the law during the making of Chaos Sound?

This album we recorded in Orange, California, at Buzzbomb Studios with Paul Miner. Cops never came, but when we decided to start new bands—wasted at 2 a.m. with our boys Death By Stereo—Paul would wake up to some real pissed-off texts and voicemails from his longterm neighbors. I mean, we are the Casualties! Right?! Here in NYC,  we keep a pretty low profile. You have to really fuck up to meet the boys in blue here. But everywhere else we are a moving bullseye. When we were in LA and done recording Chaos Sound, we did some backyard East LA shows old-school style, and we had to move to three different places before the show could happen. There were ghetto birds flying all over, telling all the punx to disperse, but we won anyways! Had some of the best times and shows. Punx always win.

The Casualties have always had a finger on the pulse of current events. With so many resistance movements gaining traction in the media and the fight for social justice growing each day, has that had any affect on your writing?

We have always had our say. We have survived some shitty administrations at this point to say the least. The Casualties will always be a voice for the outcast. We are pretty sure society has a long way to go, I mean Donald Trump? Really? Really! [Laughs.] You can find me in the Galápagos Islands—hopefully soon and forever—if that dumbass gets elected.

What releases are most excited for in 2016?

I got so caught up in “Star Wars” I almost forgot about music. [Laughs.] I have shifted to being excited about seeing bands instead of releases. This week I get to see Venom. Later this year Maiden. And also bands that I go see in the underground like CHUD, Corrupted Youth and the likes of ACIDEZ! Great bands. I am really looking forward to the new Lowerclass Brats album and a documentary about the backyard punk scene in LA titled “Los Punks: We Are All We Have.”

Any final thoughts or any message you want to give to the fans?

Well FUCK YEAH! Casualties Army! Thank you all for sticking by us after all these years. It means the world to us. Without you we are nothing. Check out our latest streetpunk story and 9th installment in our album vault Chaos Sound. We did you proud!!