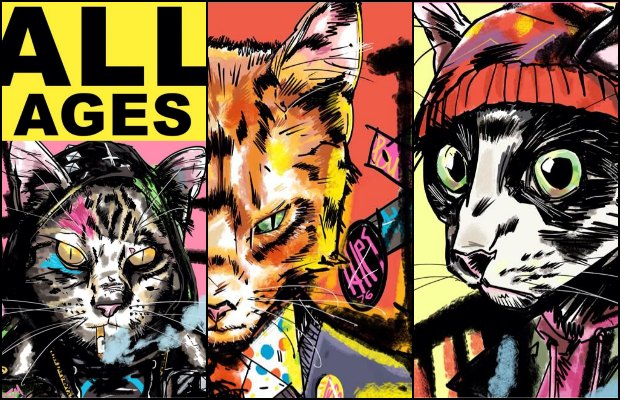 Gerard Way was named third in the Best Twitter category of our 2013 Readers Poll for good reason. In the months since My Chemical Romance’s split last spring, he has turned his personal presence on Twitter into not only an insight into what he’s doing, but an information goldmine for fans and a catalyst for a creative community who do art projects together and even offer Way creative criticism.

Though he said last year he was planning to take a break from comics in favor of his new music career, it appears Way has had a change of heart, first sharing news that work on long-awaited The Umbrella Academy: Hotel Oblivion will resume this May, and also sharing the works-in-progress for another comic endeavor, the cat-centric, punk-rock All Ages.

With The True Lives Of The Fabulous Killjoys limited series having wrapped last week, we wanted to tide you over with a little peek at what is brewing in Way’s comic world–and how you can get involved.

1. All Ages became a series because of fan response.
Way posted a drawing of the character Jones, which received such a positive response from fans on Twitter that it convinced him to start work on the series.

2. The characters in this book are anthropomorphic.
Way has given no indication that the series will have humans. He has spoken only of cats and of dogs (who are cops) with human traits. The main characters are cat teenagers who are punks.

3. The All Ages covers are among Way’s first published digital art, ever.
At the suggestion of a friend, Way recently took up digital art. The priliminary All Ages covers, he says, are the product of a few weeks’ working with the formerly unfamiliar medium and programs.

5. He’s not the main character, but he plays an important role.

6. Way describes him as “an instigator.”

8. His obstacle: He doesn’t want to get old.

9. She’s a lady (and the only female character revealed so far.)

10. Her family doesn’t have much money

11. She is an activist who supports equal rights. (For females? Cats/dogs? LGBT? We're not sure whose rights are being infringed upon in this world)

14. Though Jones was revealed first, Lemon is actually the main character.

15. His obstacle: He “dreams of leaving a mundane life behind,” and “music is his life.”