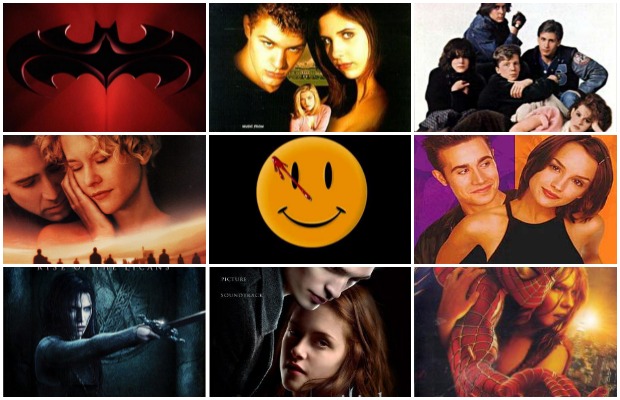 We’ve counted down awesome musician movie appearances and have given you our guide to hosting the ultimate rock ’n’ roll movie night, and in this week’s playlist, we’re showcasing some of our top picks in the motion picture soundtrack world.Whether they were made specifically for the movie or are simply highly associated with it, these tracks have all been to Hollywood, dawg.

This spooky collaboration for the Underworld: Rise Of The Lycans soundtrack is danceable, catchy and… ready to initiate you into a club for the damned? It’s only available with the purchase of the entire soundtrack, too. Ugh. WiL, just take my money and give me the song, will ya? On second thought, the tracklisting includes remixes from Thrice, Alkaline Trio, the Cure and AFI. iTunes, ahoy! Our unholy gothfather Control is no stranger to contributing music to horror films with his band Aiden, who recorded a version of “Cry Little Sister” for the 2008 Lost Boys follow-up, The Tribe, and whose “We Sleep Forever” was a prominent auditory representation of the 2007 dummy slasher Dead Silence. Fun fact: I’m fairly certain that giant pipe organ in the “Deathclub” video is also the backdrop for one of the shots of My Chemical Romance from 2004 in our current issue, AP 300. [CW]

The montage of Ryan Phillippe and Reese Witherspoon's intense fling in Cruel Intentions is unforgettable thanks to its pairing with Counting Crows' “Colorblind.” Previously a deep cut from 1999's This Desert Life, the movie made the personal, piano-driven track a surprise hit among the film’s young adult audience, and one that still thrives in Tumblr posts. Aspiring emo bands, take note: This is how that whole “captivating” thing is done. [BK]

There are two types of Dashboard Confessional fans—those who recognize “Vindicated” as the best song Chris Carrabba has ever written, and those who are lying to themselves about “Vindicated” being the best song Chris Carrabba has ever written. This soaring modern-rock anthem originally included on the Spider-Man 2 soundtrack was so ubiquitous, so popular and so awesome, it caused Interscope to reissue Dashboard's next album, Dusk And Summer, with this song tacked on—three years after the song's initial release. And as far as Spider-Man-related songs go, it kicks the shit out of that awful Chad Kroeger/Josey Scott collab. [SH]

What do you get when you combine a movie trailer and music video? You get “Iris,” which showed muted scenes of 1998's City Of Angels while the power-ballad smash lured America to the screen. For most of the video, frontman of the punks-gone-pop group Johnny Rzeznik sits alone in a high rise building, rolling from side-to-side on a swivel chair, cozying up to a strange collection of vintage telescopes that (it's coming back to you now) all magically peer into different scenes from the film. Plus, it didn't hurt product placement to team up with the chorus that overshadows the band’s entire career. [BK]

Following the final date of their worn-ragged Black Parade world tour, My Chemical Romance went into brief hibernation, acknowledging that after two straight years of touring, they definitely needed it. However, it didn’t take them long to come back out of the woodwork when tempted with the chance to contribute their concise, thrashing cover of Bob Dylan’s “Desolation Row” to the soundtrack for Watchmen. Their end credits contribution to the film adaptation of Alan Moore’s classic graphic novel brought a second wind to MCR who would enter the studio to record Conventional Weapons soon after the filming of this video. The video, by the way, isn’t your standard live-shot-to-film-snippet montage. It was directed by Watchmen’s Zack Snyder and placed MCR directly in the setting of the film, playing to a riotous crowd of Knot Tops in front of a Rorschach backdrop with the novel’s fictional Pale Horse. The casting call that was sent out suggested extras come dressed in period-correct '80s-punk garb, so many MCR fans as well as Hollywood dreamers got a chance to make their cameos in the rowdy piece. [CW]

“Decode” was an interesting stopgap in Paramore's rise. The band had just blown up off 2007's mega-poppy Riot! and had yet to start working in earnest on 2009's brand new eyes, so this song (alongside “I Caught Myself,” both of which are on the Twilight soundtrack) provided the only glimpse as to where Paramore might be headed. And “Decode” definitely ruffled a few fans' feathers at the time, sounding just a tad bit nü-metally. Many compared it to Paramore writing an Evanescence song. And yeah, it's a little goth, but, I mean, they were asked to write a song for a movie about vampires—what do you expect it would sound like? Frankly, this cut still holds up five years later, and we're glad it still appears in Paramore's setlists. [SH]

SIMPLE MINDS – “Don't You (Forget About Me)”

“But what we found out is that each one of us is a brain, and an athlete, and a basket case, a princess and a criminal.” If you don’t recognize that as a quote from The Breakfast Club and you’re between the ages of 15-30, what the hell were you doing when everyone else was watching The Breakfast Club? Seriously, I wasn’t even born when the film came out, and I’ve seen this classic ’80s flick more times than I can count. Granted, the movie is 28 years old and the fashions are out of date, but the message is still relevant, whether you were a teenager in 1985 or 2005. And like any great coming-of-age movie made in the ’80s, The Breakfast Club had a great, ’80s-riffic theme song in “Don’t You (Forget About Me).” The pivotal moments in the song and the movie happen at the end of each. As Simple Minds sing their final lines, Judd Nelson’s character, John Bender walks across the football field and pumps his fist in the air one time. If all this is going over your head, here’s something a bit more 2000-and-now: It’s also the song Anna Kendrick & Co. sing as part of their final number in Pitch Perfect. [BM]

SIXPENCE NONE THE RICHER – “Kiss Me”

When someone writes a book on the history of the teen flick (Seriously, why hasn’t anyone done that yet?), She’s All That probably won’t get as big of a write-up as The Breakfast Club, but it will always have a place in my heart. Here’s why: 1. She’s All That was one of the first movies I ever saw in theaters sans parental chaperones. (It’s kind of a big deal when you’re 11 years old.) 2. At the time (i.e. 1999) I was totally smitten with Freddie Prince Jr. 3. If you were a preteen/teenage girl in the late ’90s and spent any time listening to the radio, you totally wanted a boy to kiss you while “Kiss Me” was playing in the background. And if you say otherwise, you’re a dirty liar. [BM]

The Smashing Pumpkins’ “The End Is The Beginning Is The End” was originally written for 1997’s Batman And Robin and appears in two versions on the soundtrack, the fast-paced original version and the slower, darker counterpart “The Beginning Is The End Is The Beginning,” the version featured here. (Not to overload you on Watchmen, but the track was also used in its cinematic trailers.) Billy Corgan has noted that the song was his attempt to explore the Gotham vigilante’s pathology, focusing especially on the darker parts. [CW]