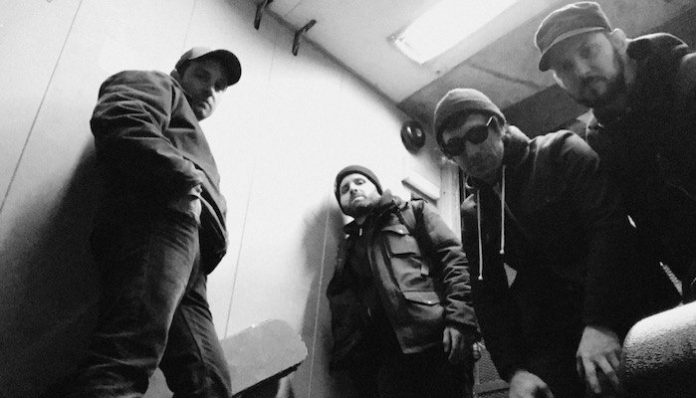 In March 2018, Cave In bassist/vocalist Caleb Scofield was killed in an auto accident, leaving behind his wife and two young children, his bandmates of 20-plus years and their unfinished sixth album.

After the initial shock settled as well as the heart-wrenching benefit shows in his honor and in support of his family, Cave In —vocalist/guitarist Steve Brodsky, guitarist Adam McGrath and drummer J.R. Conners, now joined by Converge bassist Nate Newton—regrouped and decided to issue the band’s last recordings. Final Transmission is the last time Cave In with Scofield will be heard as in-progress demos were culled for mixing and mastering as a tribute to their pal.

Read more: Against Me! celebrate discography with full record gigs

A year later, Brodsky and McGrath are still shadowed by loss and grief. AP spoke to the pair about the process of picking up the pieces following the album’s release and a recently completed European tour. The band are also teaming up with AP to premiere a new track, “Shake My Blood,” from the upcoming album, which you can check out below.

Before the events of Caleb’s passing and Final Transmission, there was a long gap after 2011’s White Silence. What was the band’s status before everything happened?

STEVE BRODSKY: The big change for me is that I moved out of Boston to New York shortly after White Silence was released. Adam, J.R. and Caleb focused on Zozobra, and I started jamming with Ben Koller who lived in Brooklyn at the time, which was the start of Mutoid Man. That’s where I was at musically, but the band as friends stayed pretty close. Instead of getting together to jam or play, we focused more on hanging out, get-togethers, parties and camping trips.

ADAM MCGRATH: The way I’ve been answering this question is that we spent some really intense formative years together in our early 20s, and we definitely needed years where we weren’t together all the time. So, was Cave In our main priority? No, but at the same time, before Caleb passed, we were definitely talking about another record. It was always on the back burner, but we were friends first and spent time doing stuff together other than sitting in rock clubs. [Laughs.]

BRODSKY: It was always tough for us to get on the same page creatively about how to approach a new Cave In record, and it was actually Caleb who had a more solid idea of what the next record should sound like, but that didn’t materialize until 2016 or 2017.

What does Final Transmission actually consist of?

MCGRATH: They were all demos that were supposed to be constructed to build a new Cave In record. They were recorded on hand-held four-tracks in our practice space; maybe a computer would get drum tracks, another recorder would get guitars and we’d sync it up afterward.

It was very haphazard, and we didn’t go into this thinking they were going to be released the way it is today. We were lucky enough to have Andrew Schneider go through everything and make it sound way better than we could have ever imagined.

Ironically, White Silence was done in our practice space, and Caleb was adamant about never doing a record like that again. He wanted to do it in a proper studio and record it properly. Obviously, we never made it that far.

With that in mind, was there ever thought given to not releasing Final Transmission?

BRODSKY: We struggled with the idea, purpose, situation and where we were at. The whole thing was a lot to take in, but one of the first things that came to mind in the midst of all the grief was something Adam said that resonated with everyone: “We had to do everything we can right now to help the Scofield family.”

That was a real sobering moment. It helped to start clear the fog of how to climb out of the depths of what we were experiencing. From there, we saw the light about how to approach this record. The idea was that we wanted to make this record in order to serve his family, to help them financially along the way. That was the mission statement, and, as a result, it got me, Adam and J.R. to spent time together with Caleb, because he’s present on every track. It became healing and helped us put our lives back together a little bit.

What was it like listening back to the mixes during the process?

BRODSKY: It was pretty painful and very upsetting. I found myself breaking down because part of the joy of hearing what’s supposed to be a finished product is sharing it with your band. This is the first experience where there’s no way I’m going to be able to share it with one of my best friends who is playing on the record. This is completely new territory, and I didn’t expect it to hit me that hard. But that’s grief; it comes out of nowhere, and the smallest things can hit you full force.

MCGRATH: Same for me. I still have a hard time listening to it. Two of the songs [on the album] are literally the last two times I ever saw and hung out with Caleb. I’m happy that the last time I saw him we played music, but I remember the day, and it’s rough for me.

With Nate playing bass, have the songs taken on a new feel or meaning?

MCGRATH: Caleb’s irreplaceable. He was the best bass player I knew and ever played with, and I knew that when he was alive. But Nate is the perfect replacement. I’m happy it’s Nate, and when we started rehearsing for shows, I straight up told him so. It feels right, but doing the new songs was a trip, especially singing his lyrics. They definitely take on a new life, a new meaning, and I feel they’re haunted in a way.

Has talking about the experience in interviews and playing shows been helpful in dealing with the grief?

BRODSKY: I think grief is a living, breathing thing that changes and has different characteristics every day. When it jumps out at you with that element of surprise is when it’s at its most powerful, but that’s normal when you’re grieving someone you spent 20 years with as a best friend and bandmate. The interviews are structured in a way where we’re trying to all participate, which is helpful.

There have been shows where things were pretty lighthearted, but the benefit shows were really hard because he was the focal point. That’s when the reality of the situation hit us.

MCGRATH: It’s hard, but playing his music makes him seem alive and feel like he’s there with us, and I hope that feeling continues for years. It may be a little awkward doing interviews, but I want people to hear his music and talk about his art, and if that’s what I have to do to direct people toward Caleb, then that’s what I’ll do.

All things considered, is Final Transmission a statement of intent? Is it going to be Cave In’s final transmission?

Final Transmission drops June 7 via Hydra Head Records, and it’s available for preorder here. The band also has a handful upcoming shows with information available here. You can check out the premiere of “Shake My Blood” below.