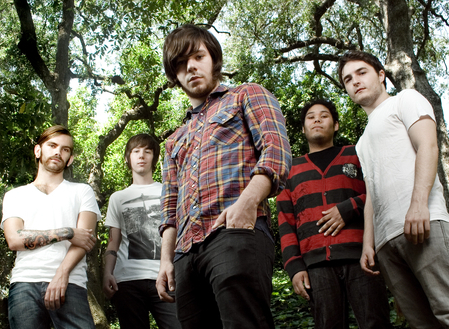 The road to success hasn’t always been sunny for California’s DANCE GAVIN DANCE. But member changes and rumors did little to stop the post-hardcore outfit who threw all doubt out the door and released 2009’s Happiness. The band cite hard work and dedication when it comes to getting to where they are today, but not without a nod to the past. Guitarist/screamer WILL SWAN says he’s much of the musician he is today thanks to inspirations from his youth. In this week’s Chalkboard Confessional, Swan reveals that At The Drive-In and Kenny Loggins have at least one thing in common.

If you were to make a mix tape of your childhood, which bands would be featured?
I listened to all kinds of stuff. When I was really young, the first CD I got was LL Cool J’s Bigger And Deffer. I started out listening to rap first. Then I got into Green Day, and that got me out of the rap scene and into rock. Then Sublime took over my life. They were amazing. So the mix tape would definitely include Sublime, Foo Fighters, Beck, System Of A Down, Nine Inch Nails and At The Drive-In.

What was the musical atmosphere at home like?
I came up with my dad, who only played George Clinton and Frank Zappa nonstop. That’s all he liked; and I ended up loving it, too. My mom kind of had folk sensibilities, like James Taylor and Kenny Loggins and stuff like that. So I grew up with lots of weird funk and crazy folk music. I had a pretty diverse upbringing, for sure.

Do you think that influenced your music taste as you got older?
Definitely. Both of my parents had a really good appreciation for music in their own right: not really together, but separately. They both bestowed that on me, for sure. Seeing them with music and the way it was with them made me want to feel that way about music, and find music that would make me feel like that.

Where did you usually get music when you were younger?
I was rummaging through stores by the time I was, like, 8 or 9. I was all about used CDs. I didn’t know anything about music. As a kid, you’re kind of stupid, and you just think things like, “Wow! This CD has, like, 20 songs on it! That’s so many songs! I have to get it!” You didn’t realize there was such a thing as “quality.” [Laughs.]

What other places did you discover music?
Definitely from friends at school. I also started going to shows when I was really young. I always kind of hated having to deal with the local scene. I liked going to see big bands. Having to see local bands kind of sucked. I didn’t get an appreciation for that until later on.

Do you remember the first concert you went to?
It was Green Day at the Fillmore [in San Francisco]. It was life changing for me to see them onstage. I was really into them. I definitely broke my “show cherry” really well. They were insane. At the time, they were younger and way more energetic than they are now. Just having that energy left a huge impression on me. I think that’s why I’m so intense about keeping energy up onstage now; it’s a really important part of the show. I think it was after going to that show that I asked to get a guitar. My parents gave me one when I was really young, but I never played it.

What made you finally start playing?
Just boredom. I left it in my closet for a few years. It was one of those really terrible Fender rip-offs. I picked it up when I was maybe 17 or so. I moved to Sacramento, California, from Modesto, California, and was constantly bored. One day, I remembered I had an instrument and started to play it. My dad showed me the basics. He played bass back in the ‘70s, so he showed me a few bass lines. I didn’t take well to instructions, though. I ended up teaching myself for the most part.

What were some of the first songs you learned?
I learned a lot of Nirvana and Foo Fighters and Blink-182. I think I even bought the tab book for Limp Bizkit’s Three Dollar Bill, Yall$. [Laughs.] I learned most of that record. I was a quick learner. It also helps that I played for, like, eight hours every day.

Did music help you cope with moving around?
I think so. Music had always kind of been a recreational thing for me. But when we moved, that was kind of the first time I was able to turn to music and not have to deal with all the other stuff going on. It was the first time realized how powerful a part music would play in my life.

Did you ever have one of those moments where you thought, “This is definitely what I want to do”?
Not really. I’ve always been kind of confused about what I should do. Music has always been my favorite thing and what I pursued the most because I’m a firm believer in doing whatever you want to do in life. I’ve done video editing and all kinds of other stuff and have been successful at it, but I just decided that while I’m still young and can do this and it’s not something everyone can do, I might as well take advantage of it.

DANCE GAVIN DANCE WOULDN’T EXIST WITHOUT (ACCORDING TO WILL SWAN):


Harvey Danger: “They’re one of my favorite bands, mainly because I love their music and vocals. Their lyrics are basically my bible. They just make complete sense to me, and I don’t think I would have been able to get through some of the things I’ve gotten through without them.”

Thursday and At The Drive-In: “They both got me into this spell, and I don’t think I would have been able to develop into the guitar player I am without them. They’re two of the first bands I tried to play on guitar that had hard parts that forced me to learn to play along with them. It made me a better guitar player, and I’m very thankful for that.”

The Replacements: “They’ve been one of my favorite bands forever. I love the way the records progress and how the band don’t seem to care about what the audience thinks. I hope I can do the same thing, and not just keep putting out the same record. They have a bunch of records that are all different and all really good.” alt