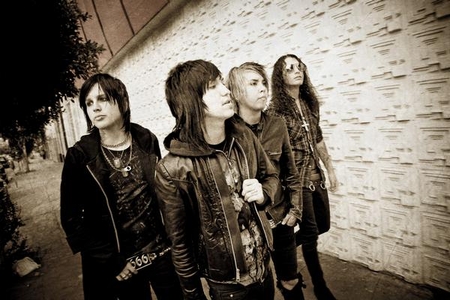 ESCAPE THE FATE haven’t exactly had the smoothest of rides since forming in 2004, but through it all, they’ve repeatedly fought the odds and come out on top. Their most recent full-length, 2008’s This War Is Ours, incorporated a lot of elements about rising above their past, however it’s only the recent past that the Las Vegas post-hardcore outfit wish to overcome. Their earliest musical influences-some of which you might expect and others that might surprise you-are still a large part of what makes the band who they are today. We spoke with vocalist Craig Mabbitt and bassist Max Green about how music has inspired their lives and livelihood.

If you were to make a mix tape from your childhood , which bands would be featured?
MAX GREEN: Probably a little LL Cool J, like that song, “Mama Said Knock You Out.” I listened to a lot of Smashing Pumpkins and Mï¿½tley Crï¿½e, too.
CRAIG MABBITT: It would have Journey, Aerosmith, the Backstreet Boys, Color Me Badd and Sublime. Back in the day, I listened to a lot of Power 92, a hip-hop and R&B station in Arizona. I remember being really young and listening to a lot of Alanis [Morisette] and Sheryl Crow, too. Then I got in to classical music like Beethoven.

What was it about those bands that you liked?
GREEN: When I was younger, I had a pretty difficult upbringing. I didn’t really have a staged family or home life. It was pretty much just me and my mom. My parents split up when I was really young and my mom got remarried, and then split up with that guy when I was in elementary school. So music was a huge thing to me. My radio was my best friend. I really connected with Marilyn Manson; he was a major influence for sure. A lot of ideas I get for the band come from him. I just love how he sticks out as an individual and does his own thing and makes his own path. I also used to get made fun of a lot for listening to Mï¿½tley Crï¿½e. It’s kind of come full-circle now to where they’re cool again. It’s kind of funny.
MABBITT: I just listened to a variety of different music. I just liked the songs. I was never really in to one kind of thing. I just liked good music.

Do you remember some of your first memories of music?
GREEN: My first concert ever was U2. It was when I was in, like, fifth or sixth grade. My theater teacher took me and a bunch of kids out to it. It was insane. I mean, I knew a couple U2 songs at the time, but I wasn’t a huge fan. I really liked “Sunday Bloody Sunday” [from 1983’s War] and “Mysterious Ways” [from 1991’s Achtung Baby]. [Robert Ortiz, drums] actually just pulled an article up for me the other day about them playing the biggest show ever, and they had this huge stage that fit people underneath and stuff. It’s so insane. They’re probable the biggest band of our time.
MABBITT: The only thing I can think of was in fifth grade orchestra when I was learning to play the violin and our teacher put on a video of a professional orchestra, like the London Philharmonic Orchestra or something like. That’s my earliest memory of watching music at all. I played violin in fifth grade then moved onto the saxophone, then joined choir and just started wanting to be singer after that.

Did you ever have one of those moments where you thought, “This is definitely what I want to do”?
MABBITT: The first concert that I ever got to go to was Linkin Park, Cypress Hill, Mudvayne, Hooobastank and Adema. I was so pumped, I got there early and spent like $50 on a T-shirt and stood in the front row. I remember singing along when Linkin Park played “My December.” [Vocalist Chester Bennington] looked my way, and it was just an incredible moment. It had such an impact on me, and I immediately wanted to be able to impact people that way. I had never even heard live music before, but I went home knowing that’s what I wanted to do with my life. Being a singer now, I look around all the time for people singing with me. I want them to have that moment, too.

Did your parents have any influence on what you listened to?
GREEN: My mom has always been really cool and open. I remember when I was a really little kid, she’d turn on the radio in the apartment or wherever we were staying and dance in the living room. She listened to a lot of old-school hip-hop and rap, like Salt-n-Pepa. We always jammed to that. She kind of let me listen to whatever I was into. She’s very supportive, especially with music. She even helped me get my first guitar.
MABBITT: My dad had a CD collection that I got into. It was how I found Journey and R.E.M. and bands like that. Then I moved into modern bands like the Used. I really wanted to do music on my own from there, so I started playing in bands and basically listened to anything anyone handed to me.

What kind of bands did you move onto during high school?
GREEN: I was one of those kids who just listened to a lot of Marilyn Manson. I was obsessed with him. I still am. I also listened to a lot of Nine Inch Nails and Blink-182. Blink were actually, like, the second concert I went to and the first concert I bought my own ticket to. It was Blink-182, Bad Religion and Fenix TX. It’s so crazy that I went to see Bad Religion in high school and now, years later, we’re signed to Epitaph which is owned by their guitarist Brett [Gurewitz].

ESCAPE THE FATE WOULDN’T EXIST WITHOUT (according to Craig Mabbitt and Max Green):


Marilyn Manson: “It’s so weird how I really connected with a lot of his music and lyrics. I was used to getting picked on a lot and his music really helped me.” – Green

Mï¿½tley Crï¿½e: “That band really changed me and affected me growing up, especially in those years where you’re really impressionable. They definitely helped mold and shape me.” – Green

Linkin Park and the Used: “I liked that genre of music before, but [Chester Bennington and Bert McCracken] really got me into modern music. I felt what they were singing about affected my life and I really looked up to them for what I wanted to do as a musician.” – Mabbitt alt