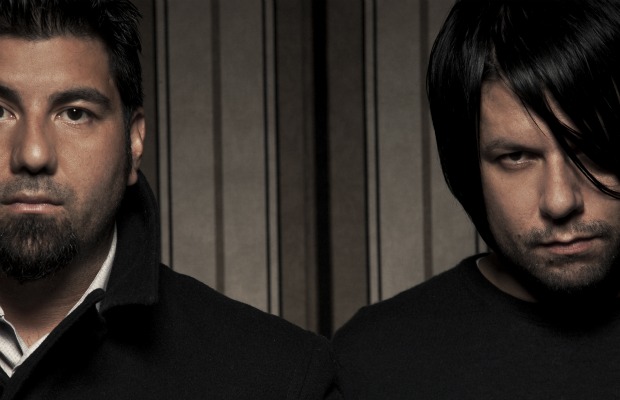 It didn’t receive a whole lot of fanfare when it was released on August 2, but there it was for the internet to enjoy: †, a five-track mini-LP from CROSSES, a new band starring Far guitarist Shaun Lopez, Deftones frontman Chino Moreno and producer Chuck Doom. Unlike the other aspects of the participants’ careers (not to mention the rapid, ADD-driven saturation style of the ’net) nearly everything about Crosses—from its roots, intentions, execution and public image—has been allowed to grow at an organic pace.

Last year, Lopez and Doom were making music at the Far guitarist’s home studio, and were wondering who they could get to sing on the tracks they had created. Lopez played them to longtime friend Moreno, and asked if he’d like to contribute to a track or two. Moreno was so into Lopez and Doom’s moody, arcane work, he immediately agreed to supply lyrics and vocals for the whole project. (At various junctures on the EP, the trio are joined by Far drummer Chris Robyn and Loaded bassist Duff McKagan).

Stylistically, † is sonically closer to the textured atmospheres Moreno was exploring with Team Sleep; the vibe is similarly laid-back, but with sophistication that’s lacking in much of the DIY bedroom-ambience that today’s hipsters worship as “witch house.” (On Lopez’s Tumblr account, he posted a mock-up image reminiscent of Shepard Fairey’s first Andre The Giant campaign with a photo of Moreno and the legend CHINO MORENO HAS A WITCH HOUSE BAND underneath.)

The trio’s attitude about the business end of the work is similar: Fans can go to the band’s official site and download the tracks and accompanying artwork for free, while hardcore enthusiasts may have ordered the limited-edition vinyl version of the EP or participated in the band-sanctioned remix exercise.

Lopez and Moreno spoke with Jason Pettigrew about their friendship, aesthetics, spirituality and working arrangements, as well as the things that piss Moreno off. (Hint: look in a mirror.)

Shaun, you and Chino have been buds as far back as the legendary 1997 public teaming up doing Jawbox’s “Savory.” People worship that moment like some sort of Cali-rock talisman.
SHAUN LOPEZ: Yeah, that was back in ’97; it was a lot of fun. It [came out of] a random idea we had. I think we were actually driving back to Sacramento; the Deftones were mixing Around The Fur and [Far] were heading back to Sacramento, and for some reason I think we were down in L.A. playing a show. We were going back up and I think Chino and Steph [Carpenter, Deftones guitarist] wanted to ride back up with us. We were just listening to that song and somebody said, “Dude, we should do this song together.” So that’s kind of how it came about. It was cool and we ended up putting it on a little promo EP that we had.

There’s YouTube footage you uploaded of you guys playing it at some gig in some club in Sacramento; it’s considered this really special thing by both Far and Deftones fans alike. You’ve been buds for such a long time, so why has it taken you so long to do something together?
LOPEZ: I don’t really know. We live literally, like, a half-mile away from each other in L.A., and we’ve kind of just been hanging more since it was like that. Before, it was like either he was out on the road or I was out on the road. I seem to remember back in those days, me and him always said, “Man, you and me have to do something together one day.” It took a long time, but it was worth the wait, you know? I’m a friend of his, but I’m also a fan of what he does.

Is there some kind of similar aesthetic you guys share? What were the discussions about the direction like?
LOPEZ: It’s cool. It kind of came about in a very natural way. I was actually writing some music with this guy Chuck…

The one they call “Chuck Doom.”
LOPEZ: He’s like the Invisible Man. He’s a guy that I met a couple years ago; we met through a friend of a friend. He was like, “Hey, I’m looking for a good, low-key studio in L.A. to work at.” My buddy was like, “Oh, you gotta hook up with my friend Shaun.” At the time, he was making some music with this guy Mackie [Jayson] who’s in Bad Brains and Cro-Mags. We started working together in the studio, but it wasn’t what we are doing now—it was a much heavier sort of thing. I was just engineering and producing that stuff, and kind of trying to line them up with a good singer. That didn’t really end up happening, but we were still kind of working in the studio when I had time. Eventually, we started talking more about music with a lot of atmosphere and cinematic music and stuff like that. Our initial plan was to do a record where we’d have three or four singers on the record and maybe give two tracks to each singer, you know, similar to a Massive Attack or a Gorillaz record, something like that…

Which you obviously played for Chino…
LOPEZ: Yeah. Chino heard it. He was back from tour and he’s always wondering what I’ve been working on. I played him a couple tunes and he was like, “Oh man, I really like this. Who are you going to get to sing on this? I’ll do a couple tracks.” I was like “Cool. Right on!” He started hearing more and more of the material and he was like, “Yo, I don’t want anyone else singing on these tracks.” He kind of staked his claim. It was pretty cool. I think for him, it was really a good thing because with Deftones, he has a lot of people to answer to and all this anticipation for each release. They’ve done seven records now; I think for him, it was probably a nice change because nobody was waiting for it.

As far as the direction of the music, I’m just interested in making good music and whatever it may be. It just turned out that it’s this. It’s funny, because when my manager heard this stuff at first, he was like, “It must really bother you. You’re not really playing much guitar on this.” I’m like, “Not really man. I’ve played guitar a lot. I don’t need to play guitar.” Even in Crosses, there is a lot of stuff that sounds like keyboards, but it’s actually guitar.

When did the project commence?
LOPEZ: A lot of it was done during little breaks that he and I would have. When he’s home, we are working. He’s pretty excited and happy about it, because it’s definitely the fastest he’s gotten stuff done on a record in a while, which I think is a good feeling to him. But again—no pressure, no deadline, no expectation, no nothing. I think it works out that way. He works in a different time-space continuum than most people do. You can get away with that shit if you produce the goods, and obviously, he has proved he can do that. [Laughs.]

Chino, a lot of fans are digging it the same way they like your other project, Team Sleep. This might sound like a loaded question, but is this project a reaction to something, whether it’s a commentary on the music scene today, unfinished business or untapped creative energy?
CHINO MORENO: I hear what you’re saying. I honestly think, in some weird way, that Shaun, Chuck and I all have this same kind of taste for certain things, you know? The general feeling of this music aside from the specifics, is that it’s pretty dark, very moody. From growing up with Shaun and knowing a lot of influences we both had in music in general, there are a lot of similarities. Getting to know Chuck, I realized he has a lot of the same similarities, as well. If [we tried to do] anything consciously, it was actually trying to get a more up-tempo feel on some of the stuff, because a lot of it was naturally coming out very dark and down tempo-ish. I love that kind of stuff, but at the same time, there are so many moods to convey.

I never feel like we put up walls with Deftones. I always felt like we could do whatever we want, to some extent. I kind of keep that same mentality with this. What’s great with this project is there’s no pre-conceived idea what it’s supposed to be—and that’s what really made it fun. With Team Sleep, although it started off that way, once all the hype and all the record companies got involved, it got turned into a Deftones pt. II. The record companies were getting involved in the song structures and I’m like, “Dude, this is supposed to be a lo-fi project that we started on a four-track.” Obviously that was 10 years ago, and the climate was a little different. Nowadays, I think that things are a little more relaxed; with the internet and the fact that we can release music for free and on our own, it feels like there were no constrictions on what [the EP] had to be.