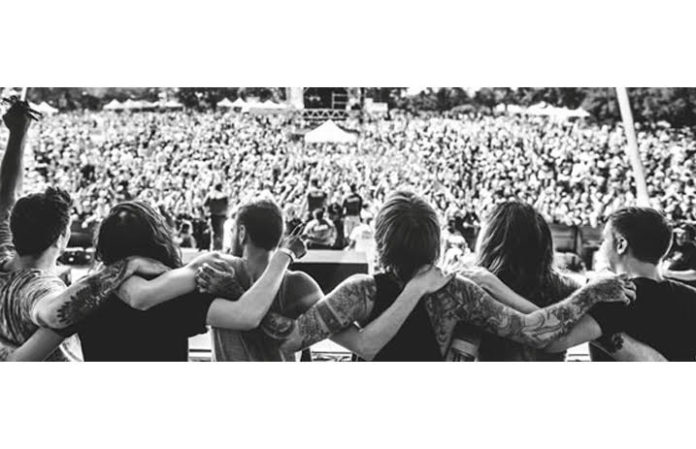 Chiodos’ socials roared to life Friday morning with the sharing of a demo song, which you can listen to below. This is the first material from the band since 2014’s Devil.

We have an exclusive interview with frontman Craig Owens, who wasn’t aware that guitarist Pat McManaman was going to be releasing the song. He says the band have been on a “silent hiatus” for a little over a year, but for him, this is them officially announcing their current break.

Hear the song and read all of what Owens had to say below.

Chiodos have been laying low for a little while now. Where did this come from?

[Laughs.] I really have no idea. I woke up this morning to a bunch of fans reaching out, and then I went to the Chiodos page and I saw that Pat had posted blacked-out photos and a demo of a song we did with the pet name of “Gummy Bears.” My initial reaction was I was just concerned, so I called Pat to see if he was alright, and I left a voicemail.

When was it recorded?

The song is from 2013, I think. It was one of the demos, I guess, from Devil. So, as we were kinda getting back into the swing of things, that’s one of the first songs that we put together. But I was really surprised [to see it released], because I haven’t talked to the guys in over a year at this point.

So, what does the future of Chiodos look like for Craig Owens?

We held kinda-a-conference call, kinda-a-meeting, and we talked a little over a year ago and we all decided to go on a silent hiatus. We decided that we weren’t gonna make a big post about it, because we [felt] like our fans had already been through enough. So, we were just gonna go quiet, and if things came back together then we [would] do things. I guess this is us announcing, officially, that we’re on hiatus. [Laughs.] Like I said, it wasn’t a talked-about thing, I just kinda woke up and saw it all this morning.

But for me… I could never say that Chiodos is done forever. If we were gonna do something, there would have to be some conversations, and I think that the odds of me doing it would be really unlikely unless all six of the original members were involved. I just don’t want to do a new [version] of it. I think our fans deserve better than that.

All’s Well That Ends Well turned 10 last year, and Bone Palace Ballet turns 10 next year. Have you thought about anniversary tours at all?

So, who knows, y’know? I have the same throwback-nostalgia that the fans do when I hear those songs or when I think about those songs, so it would definitely be something that I think would be fun, but in order to do it we would need everybody to be involved—and enthusiastically involved. alt.