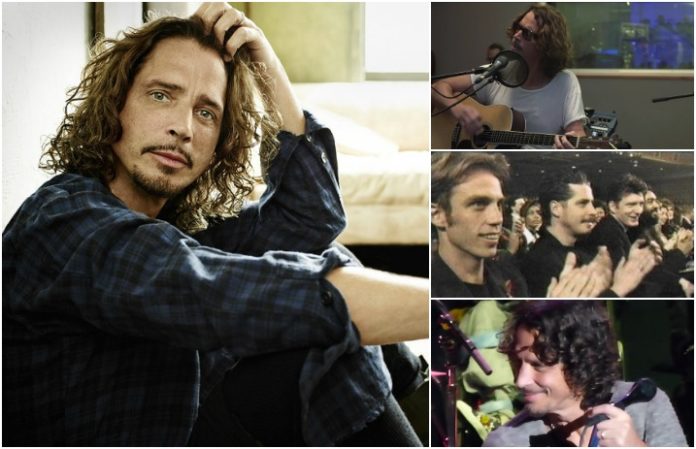 Soundgarden frontman Chris Cornell, also a prominent solo musician and founding member of both Audioslave and Temple Of The Dog, died unexpectedly on Wednesday. The prolific performer was 52. At the time, he was in Detroit, having just finished a concert with Soundgarden. On Thursday, Cornell’s death was reportedly ruled a suicide by investigating authorities.

The influential singer and songwriter left a distinguished string of stellar albums, popular singles and classic performances in his wake. As a ’90s grunge pioneer and trailblazing aughties rocker, Cornell’s talent gained him millions of fans all over the world. Compiled in his honor, here are just a few touching times the late Soundgarden vocalist left his mark on the music scene.

In 2015, Cornell delivered a stunning version of Prince‘s classic slow jam “Nothing Compares 2 U,” a tune popularized in 1990 by singer Sinéad O’Connor. The performance was part of SiriusXM’s “Artist Confidential” series, captured as Chris was promoting his fourth and final solo album, 2015’s Higher Truth. Backed by his own acoustic guitar accompaniment and soaring strings, Cornell’s emotional cover of the song would precede Prince’s own death in 2016.

At the ’95 Grammys, Soundgarden beat out Pantera, Megadeth, Rollins Band and Anthrax for the Grammy Award for Best Metal Performance, winning with their 1994 Superunknown single, “Spoonman.” Cornell accepted the honor indebted but incredulous—he began his speech by teasing the audience about the category. (“We’re not gonna leave the stage tonight until you tell us we’re heavy metal.”) Cornell also thanked his mom, who was in attendance.

Chris Cornell reuniting with Temple Of The Dog

Pearl Jam‘s Eddie Vedder introduced Chris Cornell as “one of the greatest musicians on the planet” at the 2014 Bridge School Benefit concert, where the alt rock duo performed Temple Of The Dog’s staple, “Hunger Strike.” Vedder’s acknowledgment is no act—Cornell introduced the then-unknown vocalist to the music world on the 1991 Temple Of The Dog album, a grunge harbinger that came a full four months before Pearl Jam’s debut even hit the shelves.

Audioslave—Cornell’s rock-and-roll supergroup with Rage Against The Machine‘s Tom Morello, Tim Commerford and Brad Wilk—made their live debut on the Late Show With David Letterman in 2002. The quartet unleashed an energetic reading of their first single, “Cochise,” on top of the marquee outside of Manhattan’s Ed Sullivan Theater. Reportedly, it was the first time that any band had performed from the urban peak of Letterman’s TV landmark.

Chris Cornell performing for the last time with Soundgarden

Thursday’s news of Cornell’s sudden death illuminated fan footage from the musician’s final concert performance. Soundgarden’s Detroit show at the Fox Theatre on Wednesday, May 17, found Cornell and the band lighting up the deep cut “Slaves & Bulldozers,” a track from their 1991 album, Badmotorfinger. The live run-through incorporated elements of Led Zeppelin‘s celebrated blues-rock turn on the traditional gospel music rag, “In My Time Of Dying.”

Cornell expanded his movie score résumé in 2011 with an original song for the Machine Gun Preacher soundtrack, an acoustic ballad called “The Keeper.” Another benchmark musical guest appearance on David Letterman’s Late Show rolled out the matured songsmith’s cinematic contribution in fine form.

Chris Cornell duetting with his daughter

During a 2015 concert at NYC’s Beacon Theatre, Chris Cornell invited his daughter Toni onstage for a sing-along of Bob Marley’s “Redemption Song.” Chris opened the tender family moment by noting the regional contrast between himself and his kin: “I’m from Seattle, but she’s a New York City girl.”

Chris Cornell being honored by MTV

Early on, a young Chris Cornell stood alongside a sour-faced Eddie Vedder and foretold his role in the ’90s alt-rock explosion: “I was pretty much a heavy metal kid when I was young, when I was little, you know? It doesn’t surprise me that I what I do personally is gonna be embraced by people now.”
Cornell, you will truly be missed.