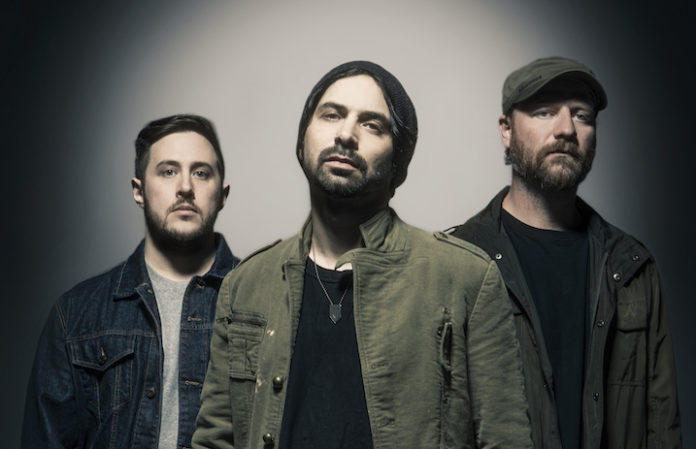 Like the mythical creature emerging from the ruins, CKY are back from the brink of devastation. Returning on June 16 with The Phoenix, their first album of all new material since 2009's Carver City, the Pennsylvania-based rock band that soundtracked a million skater kids' heavy metal hopes are restored anew, pared down but locked in, redeemed and immovable. “Days Of Self Destruction”—the band's sonic revival statement and first new song in eight years—can be heard below, along with an accompanying music video.

The Phoenix finds CKY's signature sound an altered beast, its supports rebuilt from the foundation. Its creators have evolved, their association with Jackass and the CKY video series notwithstanding. Invigorated and purely focused on the music, guitarist and vocalist Chad I Ginsburg, now the band's frontman, is reunited with fellow CKY co-founder and drummer, Jess Margera. Longtime bassist Matt Deis (ex-All That Remains) completes the groove, and the newfound trio's effortless rock and roll ushers in a new era of CKY.

“'Days Of Self Destruction' is basically about the dangers of not learning from your mistakes.”

It might not have happened this way; “Days Of Self Destruction” telegraphs the disastrous road CKY may have continued on. “It's where things could have ended up,” Ginsburg tells AP, referring to the averted demise of the band. “I definitely was writing a lot of this record from that place. Like a phoenix, it burns itself alive and is reborn from its own ashes. 'Days Of Self Destruction' is basically about the dangers of not learning from your mistakes.”

Fortunately, the band prevailed over the many pitfalls that can dominate a rock music lifestyle. “Shit was scary for a while,” Ginsburg says. “Things fell apart for a minute or two. Challenge is something that CKY have never feared, but we almost got eaten alive by our own undoing.” The musician says the group took time to reevaluate their role within the musical landscape, then went back to work with a fresh sense of determination.

“We're older and smarter now,” says Ginsburg. “Any of the bad mojo in this band is gone, as well as any of the bad habits we'd developed over the years. We all got lost in a bit too much drinking and all types of things, but that's out of the way now. We got a chance to grow up and we're happier people. Now, we're so clear—the music is just flowing directly through us without having to sort through all that bullshit.”

“I would put it right after IDR and ignore the other two records, honestly.”

“We're so fucking lucky,” Ginsburg continues. “If we can still play, and we can remain great friends like we are, now's the time to do it better than ever.” CKY took that energized motivation and channeled it into the booming selections that comprise The Phoenix. Hashing out the jams in rehearsals last spring, the trio recorded the tunes over the summer at Rancho De La Luna, producer Dave Catching's California studio famed for its connection to Queens Of The Stone Age and the Desert Sessions.

The album's aesthetic benefits from the West Coast cohesion, its eight sinuous tracks exhibiting an in-the-pocket drive that propel them past CKY's previous work. The Phoenix also features a joyous guest spot from Mastodon's Brent Hinds, who trades bars with Ginsburg on the blistering guitar solo in “Days Of Self Destruction.” “He rules,” Ginsburg says of Hinds. “He just shreds like crazy.”

With the new record ready to drop, Ginsburg says he views The Phoenix as a direct follow-up to 2002's Infiltrate•Destroy•Rebuild, glossing over the band's mid-period albums. “I would put it right after IDR and ignore the other two records, honestly.” Similar in spirit to that benchmark release, The Phoenix's distinction displays CKY's rare regeneration. The band, now more confident in their abilities and more grateful for their opportunities, are ready to show the world their miraculous rebirth.

“We're so focused. We've never had more love for what we’re doing,” Ginsburg declares. “Being able to play music, our appreciation for it now is just far greater. At some point, you think you deserve what you have—you really don't. We're very aware of what we do and how lucky we are. That gratitude is just coming through in the vibe of the whole band now.”