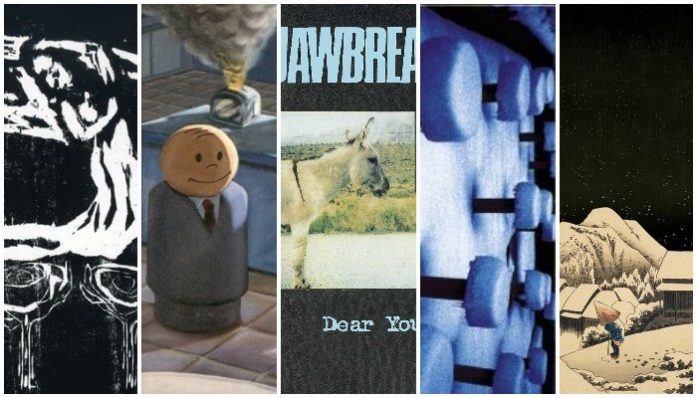 Has it really been 35 years since a group of well-intentioned Washington, D.C. punk scenesters coined the term “emo”? Because hardcore was cemented in its own realm, new bands and fans were looking for some kind of vernacular to describe a new sense of introspection. But it’s pretty safe to assume that back then, nobody thought the term would migrate beyond the Beltway and far out of city limits. But here we are.

When putting together The Big Book Of Emo Album Covers, we saw firsthand how emo as a genre was on its way toward a fourth decade. But the debate regarding how generations of musicians express themselves sonically? That debate is positively eternal. People still passionately argue about what jazz is (or isn’t). Any musical genre has a canon of important recordings whose resonance and vision have been vindicated by time. Those works of personal introspection have inspired generations of players to create (and mutate) soundtracks for their own personal realities.

Although Green Day didn’t invent punk, they certainly made the most impact putting it out into the world. Today’s emo bands didn’t start in a vacuum, but they had some assistance along the way. Some of these bands are remanded to the history books, while others became a bit more well known. And it took all of them to define a movement in the first place.

This is where it begins. The Washington, D.C. band were described by many writers as playing “emotional hardcore,” a term later shortened to “emo.” Their only LP was a crucial soundtrack to the D.C. scene’s Revolution Summer, distilling hardcore’s power while drastically changing the form melodically, structurally and psychically. The band hated the e-word tag, yet this rec is absolutely timeless.—Jason Pettigrew

Emerging from the legendary Washington, D.C. hardcore scene of the ’80s, Gray Matter kept the ferocious riffs and louder-at-all-cost regimen but opted to recognize emotions other than white-hot anger. It’s OK to be sad? Outrageous. Can’t possibly be hardcore…—Collin Goeman

A crucial title in the history of American melodic hardcore, with vocalist Pete Cortner replacing the legendary Dave Smalley. Consider how Cortner’s vocal melody and cadence in the opening track, “The Godfather,” feels like you’ve heard it 100 times already—by all the bands who seemingly lifted it for their own teenage symphonies to sadness in the last 15 years. And the record in question is 32 years old.—Jason Pettigrew

Ian MacKaye’s first post-Minor Threat band released only one album, and for it to come out the other end of his previous jet-engine ferocity into something a bit more headier sonically (seemingly influenced by obscure British post-punk) was a gambit that worked. Alongside Rites Of Spring, Embrace were crucial to the 1985 Revolution Summer in D.C., aiding in the cerebral burning of the hardcore rulebooks.—Jason Pettigrew

Taking their place in a post-Nevermind world, this New Jersey trio released two albums that worked the sonic seam of underground punk/post-hardcore and stripped-down alt-rock that would come to define an entire generation. Not many bands in any scene can brag about being covered by both respected die-hard indie fanzines and Vogue.—Jason Pettigrew

Read more: Logan Paul lip-syncs MCR after emo makeover and the scene is not happy

As harsh as the first drag of an unfiltered cigarette, 24 Hour Revenge Therapy found Jawbreaker singer/guitarist Blake Schwarzenbach grappling with the feeling of being estranged from everything. Through lyrics as confessional as they are confrontational, Schwarzenbach works through a string of failed relationships and an agonizing throat injury while scoffing at punk-rock elitism on the iconic “Boxcar.”—Bobby Makar

Truly a best-kept secret of the underground, Moss Icon emerged with cleaner melodies than their D.C. hardcore peers down the road but left the self-loathing of their West Coast screamo cousins to the wayside. Frank words backed by looming basslines fresh out of a horror flick carve out a comfy spot in the archives for these emo precursors.—Collin Goeman

Read more: Circa Survive, Saves The Day and Cartel to play classic albums at Chain Fest

Diary is a master’s thesis on the loud-quiet-loud dynamic that helped define grunge while being brutally forthright in lyrical emotion. Featured in both an episode of South Park and an installment of the Guitar Hero franchise, the album’s opening track, “Seven,” helped define emo and elevate its pop culture profile.—Bobby Makar

Also referred to as Shmap’n Shmazz, the only full-length by this Chicago band embraced so many idioms yet maintained a sense of vulnerability and dynamics that’s decidedly hard to pinpoint. The tracks were reissued in 1998 on Analphabetapolothology, a compendium containing all the group’s output. The band’s members went on to play in other bands (The Promise Ring, Owen, American Football) that are featured in this book for their contributions to the genre.—Jason Pettigrew

Read more: Quiz: Which nostalgic emo song are you?

An evolution of hardcore band Split Lip (under whose name this album was first released), Fate’s Got A Driver is a prominent post-hardcore work, one that defined the genre as it existed at the time while simultaneously (in its incorporation of heartland rock and gruff vocals) pointing to a number of potential directions forward.—Jesse Richman

On Jawbreaker’s major-label debut, Blake Schwarzenbach is at the top of his lyrical game, bouncing between youthful optimism and high school outcast angst. The LP comes off like a memoir of an alienated idealist, searching for humor in the near death and true love of every ill-fated relationship. On Dear You, Jawbreaker became sonically refined without filing down any edges.—Bobby Makar

It’s difficult to tell when tracks flip while listening to Karate. Their sometimes blazing pace will abruptly halt, falling into a funk-laden bassline that leads to the next ruminating string of words. Lumping funk with angsty lyrics sounds like a dissatisfying combination, but the differing flavors taste like perfection when cooked by Karate.—Collin Goeman

Read more: Can you tell the difference between and emo and a pop lyric?

Knapsack’s debut is a spot-on example of the bridge between punk and emo. Most noteworthy for jamming the power chords while showing an oft desire to decelerate their pace, the underground grittiness shouldn’t mesh with their heart-throbbing vocals in theory, yet they do with no signs of conflict.—Collin Goeman

The Kansas City band’s second and final effort definitely feels like a headpho…, um, earbud record. Slow-moving songs segueing from practice space ambiance into field recordings of railroads and radio static curiously couch the ruminations of frontman/guitarist Brandon Butler. What they might have lacked in technique, they made up for in vision and character.—Jason Pettigrew

Far emerged from the same Sacramento scene that birthed their friends Deftones, but where that band laced their nü metal with shoegaze, Far leaned into slowcore and the sharp-cornered heft of Jawbox and Quicksand. Frontman Jonah Matranga wails massively and mightily; together, they’re the sound of a lead anchor being dragged slowly up to heaven.—Jesse Richman

Despite clinging on to the scatterbrained punk roots of their debut by a fingernail, Jimmy Eat World were aflame with their classic savvy way prior to their mainstream explosion. You can feel the countdown to greatness within the angsty words, but that doesn’t take away from Static Prevails as a classic in its own right.—Collin Goeman

Hard-charging but intensely tuneful thanks to Jon Bunch’s marvelous voice and innate gift for melody, Sense Field set the stage for post-hardcore’s pop breakthrough. There’s an alternate universe—one where label machinations didn’t throw the band off course at their peak—in which Sense Field have the career Jimmy Eat World wound up with.—Jesse Richman

Pinkerton abandoned the breezy pop production of Weezer’s debut in favor of grit and isolation with lyrics revealing Rivers Cuomo’s most abrasively autobiographical work to date. However, despite its initial commercial failure, the LP eventually found an audience besotted with its gushing-wound candor and solidarity in the feeling that all love is abysmally unrequited. One of the most important emo records of all time.—Bobby Makar

The debut album (also referred to as Stereo) by this Denver, Colorado, group is certainly a foundational effort for the “movement,” if you will. The clean-tone repetitive guitar figures, understated vocals and unmitigated ambiance take hold until the band step on the same volume pedal simultaneously for maximum thrall. Pro tip: Seek out “Valentine,” a contribution to a 10-inch split with Boys Life.—Jason Pettigrew

The Kansas City emo boys have an innate propensity for touching listeners with utmost sincerity—a sweeping quality that offset their aggressive side and resembled a clash of emotions. The band’s debut, Four Minute Mile, revealed their unrivaled fortitude with angular riffs and cathartic hits that mirrored many trends of the era.—Marvin Dotiyal