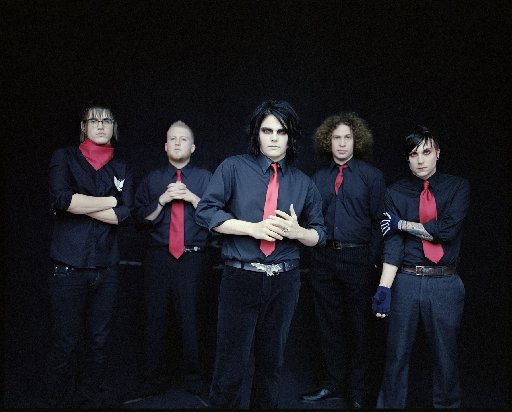 A portion of the mail that arrives at the AP Skyscraper comes from haters who think we suck simply because we’re not time-warping back to 1994 to put Tori Amos, Chris Cornell or some hackneyed industrial band on our covers. (Pardon us for knowing how to use a calendar.) But while it can’t be denied that “Cornflake Girl” and “Black Hole Sun” are timeless alt-rock classics (and have you revisited Nitzer Ebb’s That Total Age lately? Damn!), we got to wondering: Who from today’s pop-punk/emo/post-hardcore/whatthafack milieu will be remembered later on? Decades from now, when the stomachs of dudes wearing girl-pants will give way to Mom jeans, what will they be rockin’ on the last remaining ultra-mega-imperialist classic-rock station? Nostradamus was unavailable for comment, so editor-in-chief Jason Pettigrew decided to pinch-hit

AFI:
“Love Like Winter” from Decemberunderground
Piss and moan about how they used to be good “when dey wuz hahd-coa,” but unlike most of the bands in the scene from whence they came, AFI evolved into a dynamic rock band filled with resonating anthems and an ambitious drive to raise the bar creatively. That’s why “Love Like Winter” is one for the next millennium.

THURSDAY:
“Understanding In A Car Crash” from Full Collapse
At last count, there were 56,788 frustrated grocery baggers trying to reconcile their love of hardcore with their slightly elevated control of their instruments. Quit now, guys, because Thursday’s most-righteous calling card still towers like Kilimanjaro in a scene filled with sand castles.

MY CHEMICAL ROMANCE: “I’m Not Okay (I Promise)” from Three Cheers For Sweet Revenge
My Chem’s synergy of classic-rock signifiers and contemporary energy will sound great booming out of the typical suburban fam’s hovercraft long after Gerard Way establishes himself as the next Frank Miller and jazz avatar Al Di Meola hands over his entire axe collection to Frank Toro. Hell, this song’s so great, it would’ve fit perfectly in Cameron Crowe’s Say Anything… back in ’89. Clearly, it’s a track for the friggin’ ages.

FALL OUT BOY:
“Sugar, We’re Going Down” from From Under The Cork Tree
Our moles that work in recording studios say that Patrick Stump routinely nails his vocal tracks in one or two takes. Seriously, folks, if this iconic track doesn’t remain an enduring example of early-21st century pop, it’s because a bunch of middle-aged ball-sniffers at commercial radio got more money to play something by Chad Kroger’s lovechild with a Walmart checkout girl in Crib Death, Iowa.

DASHBOARD CONFESSIONAL:
“Screaming Infidelities” from The Places You Have Come To Fear The Most
When Chris Carrabba announced his intention to the world, grizzled poonks frothed in their PBR as to how some guy with a tat sleeve and an acoustic guitar could be considered “punk.” CC’s manifestation of honest emotion remains far more sincere than the sub-par mewling of wafer-heads currently wasting oxygen in independently owned coffeehouses.

JIMMY EAT WORLD:
“The Middle” from Bleed American
Twenty years from now, this track will still be cooler than anything the offspring of Emo Nation will be able to come up with. Hell, it’s better than watching a parade of enlarged prostates splash beer on each other to “What I Like About You” on quarter draft night.

MOTION CITY SOUNDTRACK:
“Everything Is Alright” from Commit This To Memory
In addition to being the perfect follow-up in a set with Jimmy Eat World’s “The Middle,” MCS’ feel-good signature number is the perfect mix of charging guitar riffage and hooks that steadfastly refuse to leave you alone. You know, like a stalking ex-lover with “Daddy” issues, only far more trustworthy.

ALL-AMERICAN REJECTS:
“Dirty Little Secret” from Move Around
In their latest AP feature, the Oklahoma contingent are feeling outside of the current neon-colored emo-hop scene. But it’s all good, because “Dirty Little Secret” will continue to remind everyone why pop isn’t a pejorative term, just as Britney Spears’ turkey neck descends into the public consciousness.

THE USED:
“A Box Full Of Sharp Objects” from The Used
These lapsed Mormon degenerates came out of nowhere (Utah) to become beloved neo-punk icons with songs and staying power. Now if we could only get a photo shoot with singer Bert McCracken recreating the cover of the Scorpions’ Lovedrive with Marie Osmond…

BRAND NEW:
“Jude Law And A Summer Abroad” from Your Favorite Weapon
Odd how this pop gem came from a band whose only aspirations were to be a scratch-and-dent Radiohead. Like Celine Dion’s heart, this track will go on, even if it might be limited to the lyrics showing up as sig-file fodder.