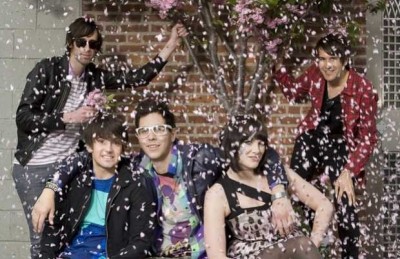 Expect It: Summer via Decaydance/Fueled By Ramen

When AP reached Cobra Starship majordomo Gabe Saporta in late April, the band were about “halfway” there to finishing their fourth album, Night Shades. “Sometimes these things just take time,” he says. “When we started Cobra Starship, I said that most bands can make three good records and then it’s over, so I wanted to make sure that our fourth record wasn’t a piece of crap.”

To that end, Cobra Starship are being careful not to force anything—or reveal too much, too soon. Saporta says that they’ve worked with multiple producers; while he’s mum on most of these names, he does confirm Kara DioGuardi (who co-produced the band’s 2009 hit “Good Girls Go Bad”) and OneRepublic’s Ryan Tedder have been collaborators. As for current inspirations, Saporta cites the “attitude toward making music” displayed by the kaleidoscopic electronic duo Major Lazer—a colorful, fun project which refuses to be pigeonholed by genres.

“That’s the thing with Cobra also,” he says. “We always have not wanted to be pigeonholed. If you listen to our albums, stylistically, they’re all over the place. We’re definitely going to keep with that tradition of doing whatever the fuck we want.

“[Night Shades] definitely has something for everyone,” he continues. “For me personally, I think we’re at the point where people listen to mixes much more than they actually listen to full albums. I kind of want to make records that feel like they’re mixtapes.”

The band started writing Night Shades last September, but during these initial sessions, Saporta wasn’t happy with what they were coming up with. “We had a lot of songs that just felt uninspired to me,” he says. “It felt like I was just doing it to do it, because that’s what we do, we’re a band.” His solution for inspiration? Embarking on what he describes as a “spiritual detox” in South America. “I went on this, like, pretty crazy…I don’t know if you call it a retreat, but I lived in a little house in the forest in Brazil, and all I ate was rice for 10 days,“ Saporta says with a laugh, as he recalls one aspect of the sojourn. ”It was pretty cool. I had so little energy that I couldn’t even cook the rice myself; this dude was taking care of me and would come once a day just to cook me rice.”

While on his recording break, he also found himself confiding in shaman-like figures (“Basically, doctors from small villages in the Amazon,” he clarifies) about all that was troubling him—including a difficult 2010 break-up with his girlfriend that “was a result of me being gone so much for playing music and doing what I love. I couldn’t balance the two, and I lost my girlfriend and it [was] making me hate music, because it took what I loved away from me.”

In the end, the trip gave Saporta “clarity” and made him feel “rejuvenated”—two things he needed to survive the studio mishaps Cobra Starship experienced after he returned. First, the band set up shop in an abandoned floor of a building owned by a friend’s family—but two weeks into recording, they were unexpectedly met by a demolition crew. Their next attempt at setting up studio space unwittingly ended up being adjacent to a place rented by a masseuse. “We’d go in, and in the back was a massage parlor,” Saporta says. “One day we came in and they had a party, and we found, like, condoms in the studio. And we’re like, ‘This is so disgusting.’” Finally, the band found a home in a converted storage space on the ground floor of Saporta’s building.

Once the band settled into their permanent digs, Saporta started delving into the issues he started dissecting in South America—and found a way to address them from a unique perspective. “When I was writing in September, the problem was [that] it was either uninspired or it was really depressing,” he explains. “It was about the fact that I lost the love of my life. As much as I need to deal with that, I don’t think the whole world needs to deal with that. It’s very self-serving just for me to make a record for that. If I would have just written that without taking my spiritual detox in the jungle, we would have had a record that would’ve just been that.

To tide fans over, last week Cobra Starship released a futuristic new single, “You Make Me Feel…,” which was produced by David Mac (Leona Lewis, Kelly Clarkson) and features vocalist Sabi from Los Angeles duo the Bangz. Another, equally dancefloor-ready song, “Don't Blame The World, It's The DJ's Fault,” surfaced a few weeks ago. Both preserve the band’s carefree atmosphere, but show marked production (and sonic) growth. “Stylistically, I think that we’re definitely a band that’s about making people have a good time, and we definitely want it to feel like a party,” Saporta says. “But we also want to experiment with those sounds and make sure that it stays fresh, too.”