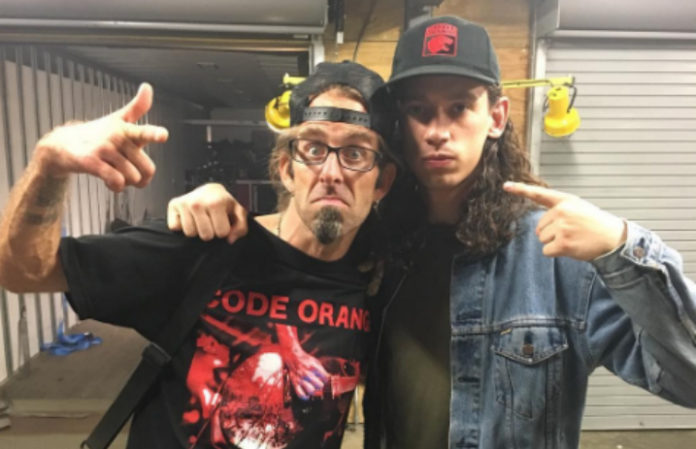 When Code Orange first started out in 2008, they were called “Code Orange Kids” because that’s precisely what they were – kids.

Fast-forward almost a decade and they’ve dropped “Kids” from their band name, gained a wealth of experience from touring the globe (both supporting reputable artists and playing headlining shows) and have been signed to the juggernaut that is Roadrunner Records since last April. This year, the band released their critically acclaimed, third full-length album Forever working, once again, with Converge guitarist Kurt Ballou, who produced both their debut and sophomore records. And today? Code Orange are undeniably one of the biggest buzz bands on everyone’s lips in the alternative scene.

We hung out with vocalist and drummer Jami Morgan at Download Festival to chew the fat and discuss some of the money-can’t-buy and completely unsolicited endorsements bestowed upon them by their established peers during their rollercoaster ride of a journey to the top.

“Chris has been posting about us, and we're getting new followers every day from it. So bring them in; we want them all!”

Corey Taylor – Slipknot/Stone Sour
“I don't know him at all, but he wrote a nice-ass thing about us, and I'm happy about that! He found the record and that really meant a lot. It made my day because people like that, when they do stuff like that, they don't need to. There's no reason to do that. So, really, thank you to him.”

We will ABSOLUTELY make that happen ������ https://t.co/N7swwKJpCg

Daron Malakian and Shavo Odadjian – System Of A Down
“Daron came to our headline show in January in LA because we have mutual people. He's a great guy; they're all super-cool. They're busy doing their thing – killing it. They have so many hits and all the songs in between.”

We have just released additional tickets to our upcoming shows in Hamburg, Hannover and Nancy. https://t.co/Z79sc77tgO pic.twitter.com/v0iyp9mppl

Greg Puciato – The Dillinger Escape Plan
“I love the Dillinger Escape Plan; their singer is my friend. [Greg] got my number and was like, 'I love your music!' and I'm like, 'I love your music!' We text all the time. He's another one who supported us. It means the world to me. They're great guys, they're an amazing band — pioneers. I hope we get to play with them on their way out because they're unbelievable.”

Randy Blythe – Lamb Of God
“These words are 100 percent – they are not fake and they are not bought. You can't beg for that. They’ve got to listen to the record, and they've got to like it.

As most of you know, I don't listen to much heavy music- I hear it on tour all the time, & I'm a grumpy old man who likes peace & quiet. More importantly, in this incredibly oversaturated internet era, honestly there's just not much new heavy stuff out there that is DIFFERENT enough from the bazillion other new bands to interest me- there hasn't been for quite some time now. LOTS of “monkey-see, monkey-do”- I mean, sure- the technical abilities of young musicians is astounding these day, like BEYOND astounding. And you see these 12 year-old INSANE shredders, because they learned to play listening to all these technical bands & YouTubing their songs & all that, but (no offense to these kids, & I know this is gonna piss some people off but I don't care because it's the truth & needs to be said) um… SO WHAT? So they can play someone else's song. Big fucking deal. Who cares? Can they WRITE a song? & if they DO write a song, does it sound like everyone else? Is that what technical proficiency breeds these days? If I can say “This sounds like a combination of (insert whatever bands are currently popular)” then I already don't care. BORING. I'd rather listen to Chet Baker or SWANS or Scratch Acid or Bad Brains or Prince Far I or Black Sabbath or Otis Redding. So it's been a while since I've cranked a record by younger heavy band, then immediately played it again, & then again. Pittsburgh's @codeorangetoth latest album, “Forever”, is that record though- someone call the brutality police, because this album CRUSHES. It's FUCKING UGLY, & they mined a lot of different influences- hardcore, metal, industrial, noise- & made their own sound. The production is big without sounding over-polished- the drums sound like REAL DRUMS that an actual HUMAN is HITTING, THANK GOD. They also came up the right way, paying their dues just like my band & most of my friends bands did- playing the DIY spaces. Kids don't seem to want to do that these days- I blame American Idol. These young cats paid dues- I respect that. They'll be out on tour soon opening for my friends @anthrax, @killswitchengage, & @jameyjasta's solo project, so get there early. Salute to the young bloods doing it RIGHT.