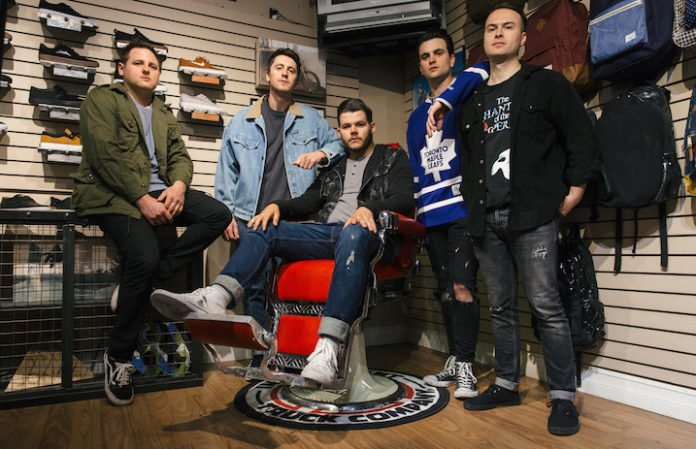 Whether they’re playing a packed room in Toronto or waiting next to a broken-down van in Lincoln, Nebraska, Coldfront know how to have a good time.

Their new music video “So Typical” is a testament to friendships founded on goofing off, a continuation of the video they released earlier this year for “Everything You Want Me To Be.”

Listen to and watch “So Typical”:

“We were more involved with the concept this time around,” drummer Michael Kelly says. “Before this, we've always gone to Miguel [Barbosa, director] and said, ‘Here is X number of dollars. What can you do for that?’ For the ‘Everything You Want Me To Be’ and ‘So Typical’ videos, we went to him with our ideas, he took them and made them way better than we ever could have on our own. Cost was an afterthought once we had exactly what we wanted.”

These two tracks are from the band’s debut full-length, Float Around, which will be released Oct. 6 on Equal Vision Records.

“We went in a bit of a new direction with Float Around,” Kelly says. “It still sounds like Coldfront, and I think, for the most part, people who liked the EP [Is This Where They Found You?] will still like it — but expect change,” Kelly says. “The most notable change is that we scaled back some of the yelling and focused more on melody. There are a few songs that are more pop-driven than before, but you'll still find enough of the aggression we're known for. I think the changes will help us find our niche in the modern music scene we operate in.”

After three EPs recorded with Sam Guaiana (Like Pacific, Rarity, We Were Sharks), Float Around was recorded at Fox Sounds in Toronto with Derek Hoffman (Like Pacific, Seaway, Stick To Your Guns, Boys Night Out), as Coldfront wanted to go for a decidedly more pop-sensible and melody-driven sound.

“The bottom line is we needed to shake things up a little,” Kelly says. “We have recorded everything pre-Float Around with Sam, in Coldfront together and individually before. Sam is an amazing producer, and I still recommend him when people I know are looking to make records, but we needed to step outside our comfort zone in order to get something new out of the recording process. I can confidently say that I think we made the right choice with Derek because we got everything we wanted and more out of this record. He brought us to a level that I don't think we knew existed in ourselves.”

Fans of the band will still be drawn to Coldfront’s airy, almost atmospheric riffs and passionate vocals, the feeling you can only get from screaming at the top of your lungs. While the new record brandishes a refreshed sense of songwriting and a certain groovability that has become synonymous with the Coldfront brand.

Above all, Coldfront are a group of people who love having a good story to tell, like this one:

“We've played shows in a lot of cool places, but I'd rather tell you the greatest city we never gigged in: Butte, Montana. We drove through on an off day last summer, and it ended up being one of the best nights of tour. You can drink on the streets and bring your own booze into bars, so you know we were partying. We saw a Metallica cover band, watched some motocross races in the road, took a shot with the guy who shot Bin Laden (allegedly), went to a wild after-hours club and ended the night watching the sun rise on the high school bleachers. It was a night straight out of a movie.”

Reacquaint yourself with the “Everything You Want Me To Be” video and see if you can spot Jordan Black (@hotgayfather) from Like Pacific making a quick cameo.

Post recording and lineup solidification, Coldfront are hitting the road again this fall with renewed vigor and a hunger for North America’s greatest pizza parlors. Catch them on a short Canadian run in September with First Ghost, and later a full U.S. tour (dates below), supporting Float Around, available everywhere there’s music Oct. 6. You can purchase here.'