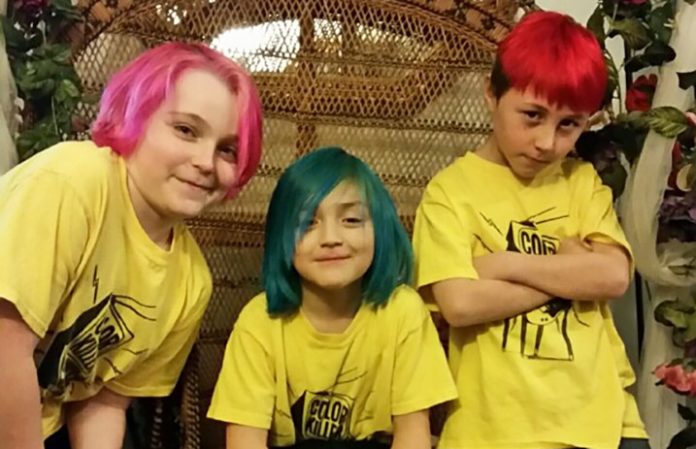 Color Killer are not only rocking through elementary school—they're playing Warped Tour, too.

The band, consisting of 8-year-old Lincoln, 10-year-old Matt and 11-year-old Nate, played their first show last August. They've played nearly 20 shows since and are finishing up their album, expected to be released before the end of the school year.

Color Killer aren't the only young band to play the tour, though. The Bots and Unlocking The Truth both played, in 2011 and 2014 respectively, but members were in their early teens.

The youngsters are obviously excited to both attend and play their first-ever Warped Tour, and we caught up with them to talk a little bit more about their influences, their music and—most importantly—what excites them most about playing Warped Tour.

Can each member introduce themselves and say what they do in the band?
Lincoln: I’m Lincoln. I play guitar and sing.
Nate: I’m N8. I play bass and sing.
Matt: I'm Matthew, and I play drums.

How long has Color Killer been a band? And how did you form?
Lincoln: My friends and I wanted to form a band and thought Color Killer would be a good name. We have been a band with the current lineup since August 2017.
Nate: End of August 2017. Lincoln played guitar and my dad had a bass in the basement and we started to jam earlier in the year, before Matt joined.
Matt: Since last August. In May, I went with my mom to see the middle school talent show. I saw Lincoln and Nate play onstage and my mom said to me “that could be you.” I ended up signing up for a weekend class at the rock institute in Marlboro [MA], and were put together with each other. My dad got in touch with Lincoln's dad, and I ended up playing in his basement. I guess it all started then.

What's your favorite part of playing in a band?
Lincoln: You get to experience a lot of cool places and hear a lot of different bands.
Nate: Playing music in front of a lot of people.
Matt: The music.

Congrats on playing a date of Warped Tour—that's amazing! Have you been to Warped Tour before?
Lincoln: No.
Nate: No, but my uncle Aaron has played Warped with his bands Bane and Only Crime (before I was born).
Matt: No.

How does it feel to play Warped Tour, where so many massive bands got their start?
Lincoln: It is exciting and going to be fun.
Nate: I’m super excited.
Matt: Awesome.

Have you played in front of this many people before?
Lincoln: I was on stage with Green Day and All Time Low, but not with my own band.
Nate: Definitely not.
Matt: No.

What about Warped Tour are you most looking forward to?
Lincoln: Seeing all of the other bands.
Nate: The fans and all the bands we get to see.
Matt: Being on a really big stage.

Anything else you want to add?
Nate: I have green hair, and my name is broccoli.
Matt: I just got a brand new Pork Pie drum kit that I love. New cymbals from Zildjian, also. Excited to play on new equipment.

Color Killer will play Warped Tour at Mansfield, MA, on July 27, and you can get your tickets here. Plus, you can “Like” Color Killer's Facebook page here.