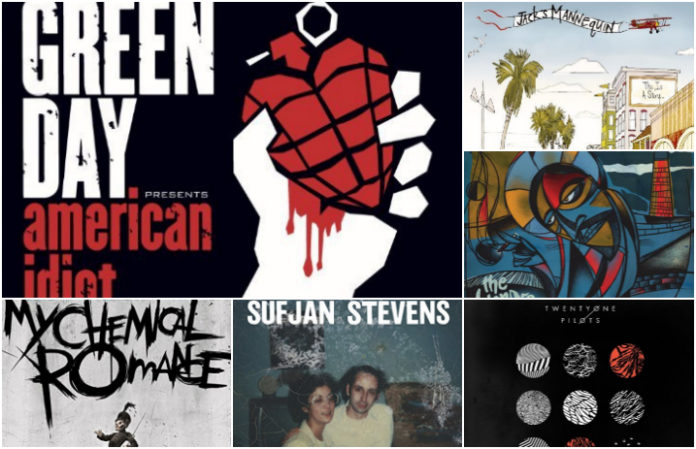 The  backstory of an album can generate an out-of-body experience by virtue of the potential daydreaming. With some conceptual albums the storyline is clear cut, while others are more subtle. Either way, losing yourself in someone else’s world can be a welcome escape. Here are 20 concept albums worth exploring.

Read more: 10 times bands were accused of ripping off another band’s album cover

Widely considered a political album, the multi-Platinum American Idiot contains the story of a protagonist named “Jesus Of Suburbia.” The lower-middle-class teen goes through the motions of leaving his hometown behind and runs into the characters “St. Jimmy” and “Whatsername,” who are each other's’ enemies. The dichotomy of the two side characters end up representing opposites.

Silverstein – This Is How The Wind Shifts

In unique fashion, Silverstein’s 2013 album orders its tracklisting in a divergent manner. Each song has a respected parallel track: “Arrivals”/“Departures,” “Massachusetts”/“California,” “Stand Amid The Roar”/“In A Place Of Solace.” The angle explores how a single event could change someone’s life in drastic ways.

Armor For Sleep – What To Do When You Are Dead

What To Do When You Are Dead tells the tale perfect for any emotionally deep demographic. The record tackles the concept of a central character committing suicide, and the whole release is from their perspective postmortem.

Jack’s Mannequin – Everything In Transit

The debut album from Andrew McMahon’s masterful Jack’s Mannequin, Everything In Transit is both a concept and personal album. With a storyline of McMahon returning to a hometown he previously left and experiencing the crumbling of a relationship, this is any emo kid’s vision of paradise in the span of an album.

Twenty One Pilots’ fourth album has sold over a million copies, a feat that’s even more impressive when you take a look at the artistic insight: Blurryface, standing as the central thematic character, represents the individual and the larger societal picture in terms of what insecurities frontman Tyler Joseph (and by proxy, listeners) hold.

La Dispute – Rooms Of The House

Mixing fiction and nonfiction, Rooms Of The House is a random, multi-decade timeline of characters going through the trials and trepidation of life: making a home a home, the deterioration of a relationship, and even life-threatening scenarios.

For any history buff out there, Defeater is probably going to be the concept band for you. Four albums of material jump within the lives of a New Jersey family after World War II, each giving crucial perspectives on relatives going through financial troubles, heroin addiction, alcoholism and crime.

Funeral For A Friend – Tales Don’t Tell Themselves

If you’re afraid of the ocean, beware! Tales Don’t Tell Themselves sees a fisherman becoming the sole survivor of a deadly storm at sea. After washing ashore in some unknown location, the man decides to build a raft and search for help.