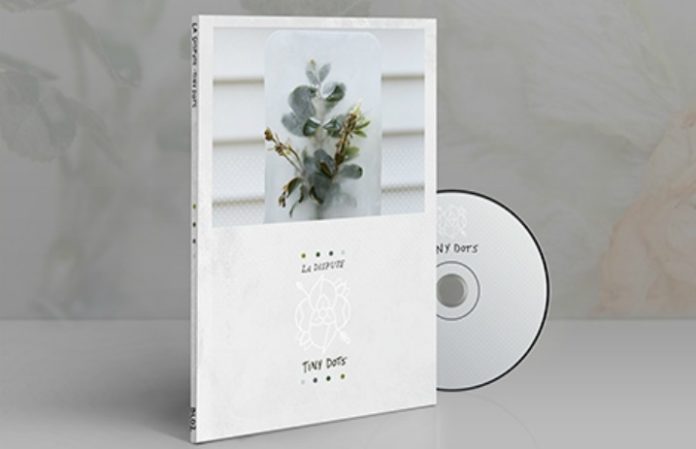 Right under the nose of the mainstream, a local band from Grand Rapids, Michigan was growing one of underground music’s most loyal followings. From basements and VFW halls to sold out shows all over the world, La Dispute are a self-made enigma, making them anything but an overnight success. I chatted with the documentary director Niall Coffey, and La Dispute bassist Adam Vass about the new documentary, Tiny Dots, which gives the first inside look at the personal lives of the band and their fans. The project took over a year to complete, editing down three terabytes of filming including never before seen footage of writing the 2014 album Rooms Of The House in a northern Michigan cabin, tours from several continents and interviews with fans before and after shows.

“We had started filming shortly after releasing the album, and we had some cool VHS footage from writing in the cabin, and the record itself seemed so unlikely to us at the time, the movie was almost a celebration of that accomplishment,” says Vass on the origins of Tiny Dots. “But like a lot of projects, the focus changes as you go and we ended up covering a lot more about the band and us as people.”

The band hashed it out with Coffey and the story began to write itself. “What I wanted to try to do was make a story that’s interesting even if you weren’t already into the band,” says Coffey: “We wanted the interaction between fans and a band who are in their late twenties appealing to a much younger audience than their age group and the sort of conflicts that come along with that.”

Beyond the canned answers in run-of-the-mill interviews and documentaries, we get to witness the band speaking from the heart. Some tough scenarios are explained, whether it be touring or even reacting to their own fans’ perceptions of them. Watching the live performances is the best way to witness the overwhelming crowd reaction and singalongs during each set, which has been going on since the early years of the band. Vass has his own explanation of the phenomenon. “Jordan ([Dreyer, vocalist] has a powerful skill of articulating a feeling, and while that feeling is often pretty bleak, it’s one that a lot of people can relate to.”

“Your band saved my life.” Coffey claims that tagline gets dropped onto La Dispute all the time. “It became evident how uncomfortable they felt with that being said. Jordan touches on it a bit in the documentary, but they do truly shy away from being put on a pedestal. These guys like people appreciating their music, but they didn’t want to be idolized.” As gratifying as it can be to be face to face with fans explaining how they made it through their rough patches in life, it’s also a heavy thing to hear.

“It’s challenging to hear things from some fans, personal tragedies especially,” says Vass. “I am exceptionally inept at handling those. I understand that it can help to discuss it, and oftentimes they're told to us in a thankful way, like we helped them overcome or reframe that tragedy. It’s nice to be considered helpful, of course, but we certainly aren't therapists or experts in anything.”

The documentary also shows the harsh reality of touring, using the departure of guitarist Kevin Whittemore as tangible evidence. Coffey explains, “It’s just like having any other job. Sometimes it’s the best job in the world and some days you just want to go home. I wanted them to be able to communicate why it’s not always amazing for them without hurting their fans’ feelings.”

“People often say we're lucky and we're living a dream, and I'm sure that’s true sometimes, but it paints what we do in an unfair light. It imposes guilt when you're not having a good day. When I'm depressed and can't help but feel awful and can't talk to the others, I'm expected to snap out of it because my job is a dream. It needed to be shared in the interest of being honest with fans and not wasting this platform to tell them things they already know.”

What makes footage like Whittemore’s final show and talking about leaving the band so profound is the fact that there is no ill will among the other members of La Dispute. They recognize why he decided to end his tenure and, on film, he even sticks around to help the new guitarist learn the parts. Something keeps these guys close even after being stuck in vans, hotel rooms and planes for months on end.

“We still have little tiffs, just like anybody,” says Vass: “We’ve had a foundational friendship for a long time, so usually the arguments are short-lived, but they happen. I think we've learned to appreciate our time apart from one another, after having spent so much time in close quarters. We've also learned as we've gotten older to be more comfortable with talking about how we feel without the brattiness of being an early twenty-something. Communication is key, the same is probably true of any friendship or relationship, which is effectively what being in a band is like.”

“They’re very uncomfortable with the whole rockstar thing and having someone follow them around with a camera isn’t completely keeping with that narrative,” says Coffey: “What was very helpful was being out with them for two weeks and them getting comfortable with me and realizing my main thing was presenting the band how they wanted to be presented. It’s easy to do with La Dispute because they are very genuine.”

“None of us know what’s next,” says Vass, “and we are all comfortable with not knowing: We are going on this tour with Envy in a week or two, but we don't have plans after that. There hasn't been any work on a new record; we have to collectively decide what we want to accomplish before we can do so.”

In retrospect, the DVD is for fans just as much as it is for the band. It shows how connected everyone is from something as simple as music. They all went through hell at one point in their lives, made it out and are now in a packed venue somewhere screaming together. Whether or not the band are responsible for saving lives, they gave confidence to their fans to save themselves—and Tiny Dots is the proof.

“I personally think we will make another record, but such a thing doesn't happen overnight,” says Vass, “especially with our group. We spend a lot of time in our own heads and projects can take us awhile, but we'd rather do them right than quickly. And if we decide to not do a record, then Tiny Dots is a fitting headstone.”

Tiny Dots is screening in several cities November 1st as well as being sold in DVD format on the band’s tour with Envy later that month.