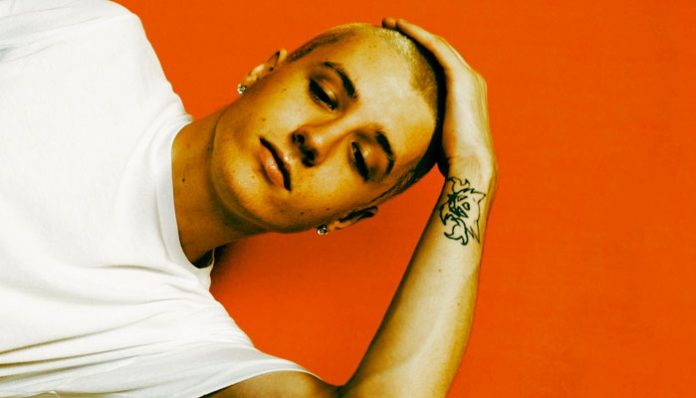 Straight out of the box, contradash was poised for greatness. Perhaps you were one of the quarter-million listeners who chanced upon “blocked” earlier this year. Maybe you’re having a hell of a time getting his earworm track “white lie” out of your head. Well, stop it right now. Because Alternative Press is premiering the singer/rapper/pop star’s new video “petal pickin’.” contradash has a way with breezy vibes and cool technology that makes him a contender to rule over America’s playlists.
It doesn’t hurt that contradash’s new video is pretty spot-on. He’s got charisma, but he doesn’t exude pop-star vacuousness. When he’s rockin’ a pink telephone receiver from the ’70s, he reminds you of that one BFF you’ve got who always knows how to make you laugh. We asked contradash (the artist formerly known as Chase Blohm) what he’s been doing, how he’s been chilling and in a world with a million new singles dropping weekly, when he’s going to be serving us with an album’s worth of tracks.

Read more: There’s a reason why you want a tattoo right now, and you’re not alone

What is “petal pickin'” about? Are you making some declarations to the world or to a certain person in particular?

“petal pickin’” is the typical “love me, love me not” game I always played as a kid whenever I found a flower. I always ended on love me not somehow. When I wrote this, I was dead broke, and Sage [Roberge, producer] and I would rip through song ideas almost daily. I was really fuckin’ lonely all the time, and it felt nice to write about vague commonalities I’d had with girls in my life.
I’m sure everyone still wonders about an old connection they’re still not sure about. I had literally two dollars in my bank account, along with really only two friends. So it was basically like, “Hey. I don’t have much. Is this connection still a thing?”

Where did you film it? Whose pool were you chilling in? Gotta say that looked pretty damned sweet.

Yo, thank you! We filmed it at some crazy baller robot house in Bel Air. Honestly, we just needed a really long bedroom for literally one shot, and that house had the perfect one. The house was just big enough to get enough shots everywhere in it, and we really tried our best to stay away from the basic rap video in a huge house that isn’t ours. I still have no idea whose pool that was.

The thing that made me laugh out loud on the video was you with the receiver of an old-school pink ’70s telephone. It’s not plugged into anything, but you’re still going for it like it’s totally for real. I have to ask though: Was it symbolism, commentary or simply overwhelmingly cool?

Dude, I knew for a fact I had to play with one of those phones before we even shot. I always like playing around with stuff people can poke fun at, like a guitar and amp that isn’t plugged in or using bananas as drumsticks. You’d be surprised how many people comment on that kind of stuff. It’s almost bait. But I also needed to flex the twirling skills. That’s why that shot is so damn long.

What’s the plan for a full-length contradash rec?

Can I pretend it’s a secret since we really don’t know? All I know is we have enough songs for [around] five albums. It’s a lot to sort through, but I want to do it chronologically. I almost wanna start dropping EPs just to get some music off the table without the pressure of a debut album.

What are you missing right now? It could be anything from a loved one, a pet, a great sandwich or the best cup of coffee you ever had.
Dude, I am in full simp-mode over this girl right now, and that is so fire to me. Emotions are really cool, man—even the sad ones. I’d rather be sad than numb any day. Anyway, I fell for this girl, and she had to go back to where she was from, which is nowhere near me. I deadass don’t know what I’m gonna do about that. Probably write more and try not to think about it. Siri, play “Long Distance” by the Naked Brothers Band.
Watch contradash’s mad phone-twirling skills in the video for “petal pickin'” below.