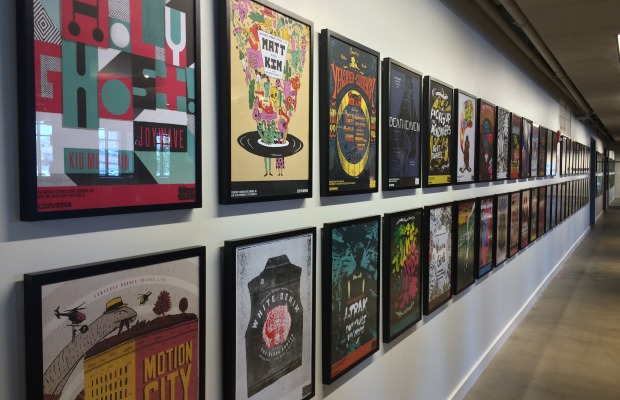 Alternative Press was invited up to the world headquarters of Converse in Boston to witness the unveiling of the brand new Converse Rubber Tracks studio. Rubber Tracks, which launched in 2011, is the product of Converse’s music initiative to give back to the very community that has supported its brand over the many years. Synonymous with rock ‘n’ roll lifestyle and culture, Converse’s Chuck Taylor sneaker has been the go-to footwear of rock, punk, metal and hip hop musicians for nearly half a century.

AP was greeted by Converse Rubber Tracks studio manager Evan Kenney, and given an exclusive tour of their brand new recording facility. “This studio is our way of saying thanks to the music community,” said Kenney, adding, “We are trying to be both artist-friendly and artist-supportive.” So far, Converse’s support has enabled over 1,000 bands to record in the Rubber Tracks permanent studios and another 600 bands have participated via their pop-up mobile studios around the world. Kenney summed up the experience by saying “For any new artist, free access to a high-quality studio and one-on-one time with a professional team of producers and engineers are key to any great recording experience.”

Brad Worrell, studio manager of the original Brooklyn-based Converse Rubber Tracks Studio, works with a rotating cast of producers and engineers to help emerging bands find their sound, educate them on the recording process and get them to the next level. “Many bands remark after recording with us that they never even knew what they sounded like before. Genre-wise, we have no limitations or barriers regarding who is let in,” said Worrell, who has worked with many bands since their 2011 launch, including the APMAs-nominated New Politics.

Jed Lewis, Converse’s Global Head of Music Marketing, ran a brief panel discussion with the above staffers and local musician Stephen Konrads of the Rubber Tracks-produced band, Eternals. Lewis highlighted the uniqueness of a city like Boston and how the traditionally collegiate town, birthed a very wide variety of music styles and innovations. Boston is the home of classic rock legends such as Aerosmith, the Cars and J. Geils Band, as well as alternative-rock mainstays such as Dinosaur Jr., Dropkick Murphys, Converge and the Mighty Mighty Bosstones. In the past few years, we have seen the likes of Passion Pit, King Tuff and AP faves PVRIS bust out nationally from the Beantown music scene.

The Converse Rubber Tracks music imitative expands past bands coming into the studio to record.  “We have staged nearly 100 sold-out Converse Rubber Tracks live concerts with A-list bands such as metal icons Slayer, punk-rock godfathers the Descendents and hip-hop chart-topper Chance The Rapper, says Lewis. “We give these headliners the opportunity to pick their opening acts from the pack of emerging bands that have already recorded at Rubber Tracks. Tonight, at the Sinclair here in Boston, we will have our latest show with Matt & Kim headlining, and opening for them are the Barbazons, a band that has come through the Rubber Tracks system.”

In deference to the modern wave of home recording studiophiles, Converse also have recorded a 20,000 deep sample library, all available free for musicians to use at their fingertips. To date, over 2.3 million samples have been downloaded and used.  “We don’t want to forget about the home studio fans,” said Lewis.

The facility’s main attraction is the brand new 1,100-foot studio, designed by acclaimed studio designer Fran Manzella. It still has that “new car smell,” and a band has already set up for the day, ready to lay down some tracks. The studio features a Neve mixing console, signed by board creator, Rupert Neve himself. Neve Boards are the preferred mixing board of choice for top musicians: Dave Grohl swears by them.

Converse Rubber Tracks are searching for a big batch of new bands to come and record in their studios. Do you think you’ve got what it takes? There are no requirements to musical genre, age or gender. The best part? There are no strings attached. Artists get to record and mix here absolutely free and can walk away with their recordings with 100 percent ownership and rights. So what are you waiting for? Head over and apply now!