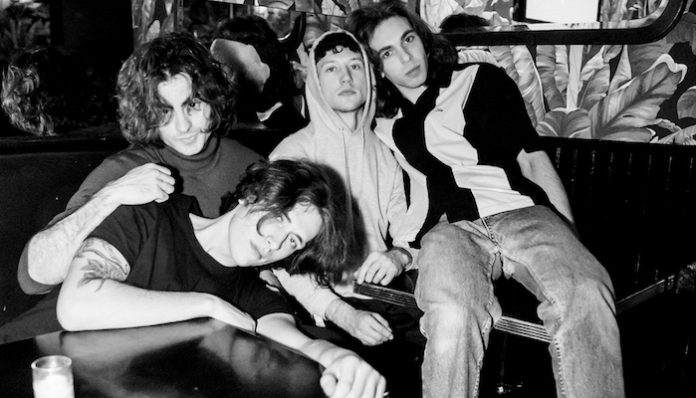 Today AltPress is premiering “It Takes Time,” the new track from Philadelphia-based post-punk outfit Courier Club. Although it’s not as dark as most bands deemed “post-punk,” the quartet bring a dance-floor sensibility to the proceedings.

“It Takes Time” sounds great on your playlists alongside artists such as the Killers, Metric and Tokyo Police Club. In addition, the song harks back to Philadelphia’s halcyon early ’80s new-wave era, similar to such city icons as the Hooters or Robert Hazard. The band say C-Club’s consciousness is all about what happens when they’re in the room together.

Read more: My Chemical Romance are why you lost sleep over “A Summoning” nods

“We don’t really have a single formula for writing songs,” Courier Club say in an email. “Some spark traditionally during practice, some are built piece by piece on the computer and others derive from a very poignant moment of inspiration brought on by an outside experience.

“This song’s inspo in particular was the product of listening to ‘It’s Perfect’ by Bay Faction for a month straight. After we recorded the instrumental [tracks], our producer and Tim [Waldron, vocalist/guitarist] spent a day listening to Scary Monsters (And Super Creeps) by Bowie to garner some inspiration for the song vocally. The powerful and haunting performance on that record inspired Tim to explore the low end of his range, which created that moodiness that blankets the ‘new-wave dance party vibe’ foundation of the song.”

Courier Club have built their reputation on alluring textures and pop sensibilities. Most bands have agendas about what they want to accomplish with their music. To their credit, Courier Club just want you to live your best moment in front of them.

“There are so many artists out there riding their own wave. It never feels like there is a shortage of an interesting movement to explore,” they write. “Despite that, a lot of shows we’ve been to—especially smaller guitar-driven shows—have lacked energy in the room. Like there’s some unspoken doctrine being maintained to restrict you from being comfortable enough to lose yourself and have a good time. We want our shows to be devoid of that attitude. We want to build a culture where you enjoy going to shows without submitting to a stereotype that is supposably intrinsic to the genre.”

From your head to whatever part of your body makes you want to hit the dance floor, Courier Club are aiming for it. In addition, when asked which preferred activities Courier Club suggest while listening to their tracks, the band were frank. “Probably playing Minecraft, eating doughnuts or driving like your kids live here.”

Check out “It Takes Time” below. As you jump around, try not to get too much powdered sugar on your clothes.

The band are currently on tour with dates below and tickets here.