The young band are poised to be the next great thing to come out of Columbus, Ohio. Wait and see.

Drive down two hours from Cleveland on Route 71 and you’ll land in Columbus, home of such happening bands as twenty one pilots, Starset and Beartooth. Soon it will be time for Cousin Simple to be added to that list.

The band—vocalist Harsh Hoag, guitarist Ryan Ulibarri, bassist Mitch Whittaker and drummer Joel Lorenz—aren’t old enough to legally drink, but they are ready, willing and able to wipe that bored look off your face within two songs or less.

Alternative Press is quite stoked to premiere the debut video for Cousin Simple’s song, “Star Destroyers.” In the clip, a boy sets out on an adventure that somehow brings him into a basement revealing an alternate universe that looks like somewhere between Area 51 and the Tom Cruise-led version of War Of The Worlds. It’s a cool backdrop for the Simps’ brand of time-machine rock that appeals to listeners across the board.

“‘Star Destroyers’ is about the struggle to improve yourself,” Hoag says. “The lyrics are about my battle to overcome bad habits and deal with the challenges in my head. The phrase ‘star destroyers’ is a metaphor for the demons in my mind and getting over them. Instead of these things ruling me, I decided I was going to rule them. When you decide to change for the better, it takes a leap of faith. This song is about that jump.”

Hoag and his team aren’t into half measures, choosing instead to fire up an amazing work ethic. Last night (Tuesday, Sept. 3), Cousin Simple transformed the Columbus nightspot the A&R Music Bar into the outer-space creepshow they created in the video.

“The idea of a strange and fantastical world seemed like the best way to represent the struggles of our minds during the creation of the video,” the four-piece says. “The concept really started to develop when David Fachman, owner of the Scare Factory, welcomed us to use his warehouse in Columbus and some really cool Hollywood movie props. Then we partnered with video production team the Film Forge to bring our vision to life.” 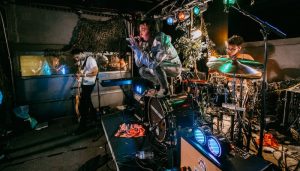 Make no mistake, these young men have some vision: When asked if there were three records they could all agree upon listening to in the van on the way to gigs, they immediately rattled off Two Door Cinema Club’s Tourist History, Catfish And The Bottlemen’s The Balcony and the Strokes’ world-class debut, Is This It. Those choices may give you a glimpse of what they’re all about, but nothing beats seeing Cousin Simple live.

“There’s a raw energy when all of us walk onstage that can’t be matched,” they share. “And we feel so lucky that we get this opportunity. It’s a gift like no other.

“There’s something really special happening in Columbus, Ohio, right now,” the band says about the vibe of their city’s music scene. “There’s a great mix of young and hungry artists and older mentors who want to see us succeed. Shows in the city are always crazy. Columbus has so many incredibly talented bands coming from our city that we look up to—twenty one pilots, CAAMP, Beartooth, Worn Flints, Doc Robinson, Girl Fox, Ghost Soul Trio, Hello Luna, Pray For Sleep and so many more. We are also extremely fortunate to have industry professionals from Columbus and other cities that support us and so many others always looking out for emerging bands and special ways to get behind them. We love our hometown.”

While you’re waiting for Cousin Simple to come to your town, check out “Star Destroyers” and see if your crystal ball and ours are in sync. You can purchase the track right here.

Read more about Cousin Simple and 29 other bands who we rocked to all summer in our “See The Light, Feel The Heat” special from AP 371.