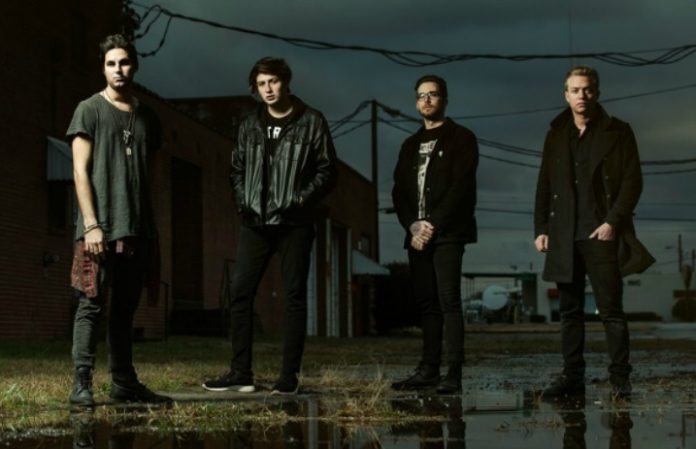 “I climbed a fucking mountain at 5:30 in the morning!” Cover Your Tracks vocalist Paul Rose exclaims. “I didn’t even know! I went out there with pants and my whole emo swag.” Apparently, no one decided to tell Rose that part of the video shoot for “Striking Matches” was to take place atop Stone Mountain near Atlanta. Though Rose reports that the face of Stone Mountain is “very, very steep,” the band surmounted the obstacle in one piece to deliver the music video to fans on the same day as the release of their debut album, Fever Dream.

The current lineup of the new Epitaph signing borrows members from some older projects you may remember: Woe, Is Me, Decoder and Cursed Sails. While there are still positive vibes and useful experiences left over from those days, Rose and guitarist Omar Magana are insistent about Cover Your Tracks being their one and only flagship. “This record is what we want people to know us by,” Magana says. “We don’t want to be known as ex-members of any other band in the fucking world. We want to be known as members of Cover Your Tracks, current.”

The band’s electric debut is a product of which they’re extremely proud, having put as much diversity and care into Fever Dream as possible.  “We wanted to be dynamic as far as songwriting,” Rose explains. “It kind of touches on that fever dream feel. You’re in this world of hallucination; sometimes you’ve gotta pop your head out of it, sometimes you get pushed right back under. You never know what’s gonna happen next.”

With influences ranging all the way from theatre and classical music to hip hop (with a special nod to rapper Future from Magana’s side of the production equation), it’s easy to see how intense metal-inspired tracks like “Bellow” can occupy the same space as electronically tinged songs like “Are We Innocent.” But Magana and Rose both agree, if you want to get a feel of what Fever Dream and CYT as a whole have to offer, you have to listen to “Cages.”

“It contains the content of everything,” explains Rose. “It’s got all of our tones that we have everywhere else. It’s one of the last songs we wrote for the album. I feel like it really speaks to kids these days that are having these kinds of troubles. We do things to keep ourselves separated from each other.

“Part of the whole fever dream concept, too, is that we live in this digital world that we’re all trying to adapt to and we don’t understand what it is that constricts us,” Rose continues. “And we have all these issues and people can’t seem to figure it out. I feel like we just miss this physical and emotional connection. We still connect with each other, but now the forms of communication have come so far away from real emotional eye contact that we’re all struggling and keeping ourselves in dark corners.” Hence, the pixelated, color-saturated album artwork of a giant iris on the cover of the record.

So come out of your corner and check out Cover Your Tracks this fall while they’re on the AP-sponsored Hell In The Hallways Tour with Ice Nine Kills, Secrets, Sylar and Out Came The Wolves.