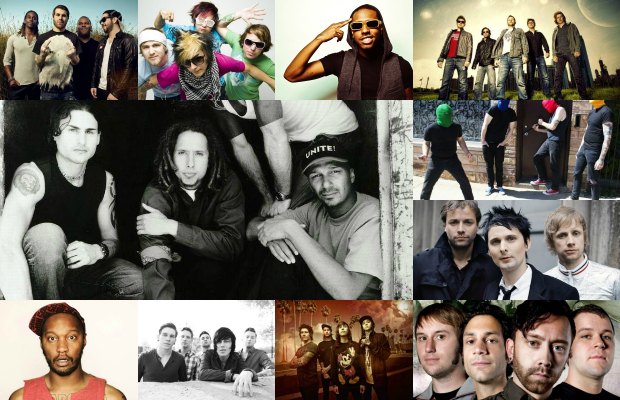 On November 27, Rage Against The Machine will reissue their groundbreaking self-titled album in a special 20th anniversary edition, loaded with live tracks, demos, video footage and extensive liner notes. Rage Against The Machine still sounds fresh and unique two decades (and thousands of imitators) later, but why stop with the studio album? That's why we've compiled, track by track, our dream tribute album to one of rock's most influential landmarks. Hopefully some of the bands will see this and take it upon themselves to challenge each other in the practice room—or fly to Cleveland and beat the hell out of us for even suggesting it.

TRACK ONE: “BOMBTRACK”
WE THINK IT SHOULD BE COVERED BY: HYRO DA HERO
Rage's incendiary sound was born out of a multicultural Los Angeles just getting over the riots of April 1992. Up-and-coming MC Hyro Da Hero is a fellow Los Angelino who spits just as much fire on the mic as Zach de la Rocha did in his heyday. Not to mention his backing band is the stuff post-hardcore dreams are made of: Cody Votolato (guitar) and Mark Gajadhar (drums) of the Blood Brothers have frequently toured with him, as has Paul Hinojos (bass) of At The Drive-In. The fury these four could create while paying tribute to Rage would be something on par with the fury Rage themselves created. [SH]

TRACK TWO: “KILLING IN THE NAME”
WE THINK IT SHOULD BE COVERED BY: BROKENCYDE

Roll your eyes if you must, but we're willing to bet the song's classic refrain (“Fuck you, I won't do what you tell me”) is a phrase many enthusiasts of the autism-crunk unit like to hurl at their parents for making them clean cat boxes or visit their grandparents. You know we're right… [JP]

TRACK THREE: “TAKE THE POWER BACK”
WE THINK IT SHOULD BE COVERED BY: MUSE
Frankly, we're kinda surprised this hasn't happened yet. Just listen to the original track: slap bass, a funky guitar solo, a liberal use of cowbell and vague lyrics about an unnamed rebellion fill out five-and-a-half minutes of Rage Against The Machine but could have just as easily been on The Resistance. “They will not destroy us/We will be victorious” is no different than “We gotta take the power back” when you really think about it. [SH]

TRACK FOUR: “SETTLE FOR NOTHING”
WE THINK IT SHOULD BE COVERED BY: RISE AGAINST

Rise Against majordomo Tim McIlrath knows how to write an anthem to move people. But if anybody could pull off this chunk of slow-burning menace (replete with an almost pastoral lead break) that exhorts “settle for nothing now, settle for nothing later,” and not look like a toolbox doing it, it would be Arlington Heights, Illinois' finest. [JP]

TRACK FIVE: “BULLET IN THE HEAD”
WE THINK IT SHOULD BE COVERED BY: PIERCE THE VEIL
Pierce The Veil make no attempt to hide their ethnicity—their Latino heritage plays a strong role in the music they create, just as it did in Zach de la Rocha. Sure, San Diego might not be as dangerous as south central L.A., but we're sure the Fuentes brothers have seen their fair share of fucked-up shit go down in their time, and they and their bandmates have more than enough musical chops to pull off a hip-hop-influenced cover of this Rage classic. [SH]

TRACK SIX: “KNOW YOUR ENEMY”
WE THINK IT SHOULD BE COVERED BY: I FIGHT DRAGONS
The stuttering guitar figure that runs through this track would be ramped up significantly via Nintendocore princes I Fight Dragons and their way around bent circuitry and assorted 8-bit mania. And they're on tour with MC Lars, who could take over the backing vocal position originally performed by Tool's Maynard James Keenan. Synergy people, synergy… [JP]

TRACK SEVEN: “WAKE UP”
WE THINK IT SHOULD BE COVERED BY: P.O.S.
Minnesota rapper P.O.S. fills his albums up with off-kilter beats and forceful, complex rhymes, so “Wake Up” would be a challenge in simplicity for the otherwise complex MC. It's in straight-ahead 4/4 time with a sinister guitar riff, and while Zach de la Rocha raps about some heady shit (fascism is never an easy topic), he also simplifies the issue down to two words, repeated over and over and at the top of his lungs: “Wake up!” It would be rad as hell to see P.O.S. try his hand at this, if nothing else than to just witness him channeling some serious anger for the last minute of the song. [SH]

TRACK NINE: “TOWNSHIP REBELLION”
WE THINK IT SHOULD BE COVERED BY: MASKED INTRUDER
One of punk rock's brightest new talents, Madison, Wisconsin's Masked Intruder are reportedly comprised of four ex-cons just trying to write love songs (and also rob people). We wouldn't expect these boys to try and play this song about South African apartheid straight up (pop-punk is notoriously unfunky, and they might be excommunicated if they owned even one cowbell, let alone the two different ones used in this song). But they could easily adapt the lyrics to a three-chord banger, given the first verse features lines like, “Locked in a cell/Yes, the structure's a cell” and “This is a stick up.” Is it a bit of a stretch? Sure. Fuck you? Absolutely. [SH]

TRACK 10: “FREEDOM”
WE THINK IT SHOULD BE COVERED BY: GLASS CLOUD
These dudes pretty much peel the paint off of any room when they show up and plug in. But the combination of Jerry Roush's stentorian growl and guitarist Joshua Travis' eight-stringed righteousness would make heads swivel right off the world's spines. You know what? They should cover the whole damn album, just to school the planet's bitches. [JP]

Disagree with the editors? What else is new? Tell us below who you'd swap out for your own personal tribute album.