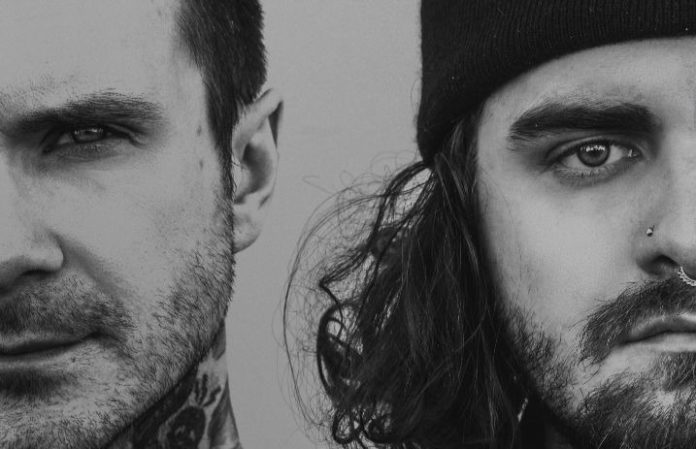 “I’ve been known as meandering and as inconsistent finding a niche and beating it into the ground,” says badXchannels frontman/founder Craig Owens, in a casually lucid way. “Because I’m not interested in being someone’s brand. I’m not interested in not having control of my life. I’m not interested in fitting a narrative. I am interested in living pure and honestly, and I think this music is the best representation of that.” That commentary succinctly sums up Owens’ career as the focal point of such recognized post-hardcore outfits as Chiodos and Destroy Rebuild Until God Shows and now in the slow-evolving, late-night-listening grooves of badXchannels.

Today, AP is premiering badXchannels’ “Memory,” shot in Sedona, Arizona, by Swiss director John Osterman. The video conveys a mood, more than a platform for the singer—which is exactly what Owens’ wanted. “As basic as it sounds, I wanted the clip to feel like a memory,” says Owens from his home in Michigan. “What John did with the symbolism is really beautiful. It reflects the lyrics, but it uses nature as a symbol, as opposed to just putting it out in front of everybody as plain as day. I love the shots he got; I love the editing. But I really wanted to show nature and really communicate what was going on in the song, without coming off self-parading or overbearing in any way. There’s no direct me-to-camera at all, and that was on purpose. I asked him not to put me in that position.”

There have been some significant updates in the world of badXchannels. Owens has enlisted the help of close friend Trent Clark (of RadioDriveBy) to assist in the creation of new sonic vistas. After releasing the EP WHYDFML with SharpTone Records, Owens amicably ended his relationship with the label, choosing instead to book shows and release music gradually DIY-style. Now more than ever, Owens feels comfortable in his own skin, making music, strengthening the bonds between family members and other figures in his personal life while approaching a level of self-actualization. “I’m very thankful,” Owens says. “I feel evolved. I feel more at peace and excited to communicate again. I don’t feel shy or embarrassed or afraid of not being accepted. It’s unleashed something in me that I feel I’ve been missing yet looking for, for quite some time.”

There’s an interesting vibe going through “Memory” that’s kind of hard to articulate. Calling it “experimental” doesn’t hit it—that implies that you’re doing something really harsh like banging on sheet metal and screaming your head off—and “edgy” seems too cliché. There’s certainly a texture to it that’s different from what’s happening in contemporary soul/R&B music, yet it still connects to your head. The drum programming feels jagged, but in a more curiously subtle way.
It’s got a modern alternative feel to it, but in a modern, progressive way. The bass line comes across “R&B,” I guess, but the music behind it is more aggressive. That was definitely on purpose for the evolution of the sound.

When the first badXchannels release WHYDFML came out, it was really cool hearing your voice in the context of laid-back, late night listening. If the video is any indication, can I assume you’re going to develop that same kind of vibe, but with elements that will be more, for lack of a better term, askew? You’re still emphasizing melodies but are approaching things that are texturally curious.
On the journey that I’ve been on nine months or so, I wanted to create something that would come across like everything you mentioned: more rough, more jagged and a little more different. Everything I’ve done prior to writing badXchannels music had been different. As I began to dive into it more, I began to realize it was OK to evolve in a natural way. I didn’t stop myself from hitting the button when it came to those jagged edges. As I continued to do it, it matched the sound in my head more accurately than the initial tracks did. I’m really excited for the evolution of badXchannels: The sound design aspect has limitless opportunities to it, and the thought of that is really exciting to me.

I think there are different nuances and flourishes in everything that I do that would be related to each other. You can listen to “Memory” and you can listen to Chiodos, and you can see signifiers as my voice, songwriting style, tones and textures. It wasn’t like I was listening to that EP and thinking about what could’ve been done—it’s more like a journey. I kept finding new influences, and I began to find myself in the culture that exists around it. I started listening to a broader spectrum of artists who inspired me in ways that felt nostalgic and safe, but also matched and inspired the trajectory to where I wanted to go.

You’ve enlisted your friend Trent Clark to be a creative foil in badXchannels. What does he bring to the proceedings?
Trent and I have been on a similar path—we spend our days trying to figure out life. When we make music, it all becomes one thing. Him coming into the project allows me to focus on a purity of expression making music. He has amazing taste in music, which kind of helps me dial in because then I can follow impulse and instinct. The whole experience is very exciting to me. I’m playing the instruments, and he’s doing the programming.

What are you listening to these days?
Fifty Grand, Eastghost…there’s always an array of music I love. Anything by James Blake. Anything pure and honest that connects with me at a deeper level. Things that speak to me.

It says something about where your head’s at right now.
Yeah! I think as a person, you wake up one day and you look behind you and you want to see a life that you’re proud of. That’s kind of where I’m at now, looking back and starting to understand this whole forever kind of thing. It frees me of the now—or six months from now. It’s freed me to make music that I know I’ll be proud of in the future, because it’s taken so much of the grandstanding, game, sell and focus out of it, allowing me to make just pure music.

What is “the forever thing” you’re speaking of?
Not following trends, not worrying about how successful something will be. It’s the perspective of “Will I be proud of this in 10 years?” kind of like breaking a hedonistic cycle around music, for lack of a better term. Hedonistic in terms of the want or need for commercial success.

There are listeners who have embraced badXchannels, but there are still others who would like you frozen in amber, keeping you in a different part of your mythology by, say, wondering for a DRUGS reunion. Do you have moments where you feel like you have to reconcile some fans’ wants versus where you are presently?
The first thing is that I don’t feel like I’m entitled to have anybody like any of my music, ever. Music is such a subjective thing, that I don’t attach my worth or its worth to the reception of anybody. Music is honestly my way to communicate and cope with living than it is anything else.

That being said, when I see those sort of responses, I don’t feel, anger, frustration, resentment, any of those things. At this point, it doesn’t hurt my feelings; I’m able to laugh and shrug off things in an understanding way. I don’t let it affect me at all, as an artist or a person. I think this is just the journey that I have to go down as an artist. I’m willing to make sacrifices based on what I need to communicate. It’s going to continue to evolve whether I or other people want it to or not.

Initially, no one really wanted the Chiodos sound. But you have to be out there and be willing to keep going. Through the consistency of my music, that’s where my legacy will lie.

In “Memory,” you sing, “I won’t go quietly/I don’t want to be a memory.” That could be a statement of artistic intention, as well as you defining yourself.
I think they’re the same thing. What I do is music—that is my trade and I love it more than anything. The concept of reaching a plateau and then accepting it sounds like my own personal version of hell. [Laughs.] To not grow would mean to not have purpose, which would mean I wouldn’t get out of bed in the morning. It’s personal and artistic—it’s all the same to me. alt