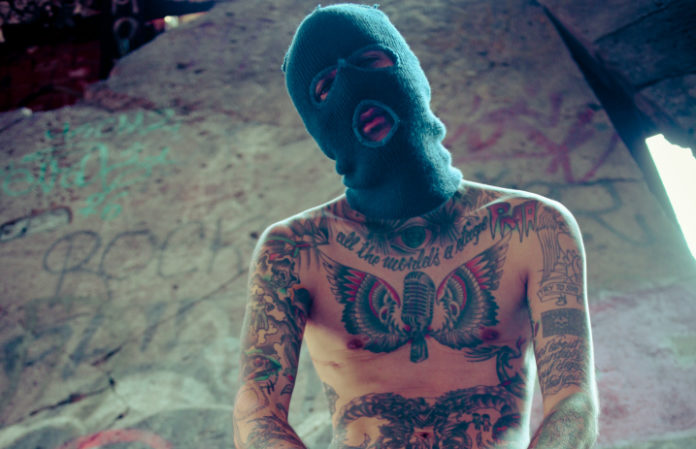 Last week, Craig Owens gave the music world a surprise with the announcement of his new project, badXchannels. He will release the debut EP WHYDFML on Nov. 18. While the vocalist is well known for his success in the heavy music world, with the influential post-hardcore band Chiodos and Destroy Rebuild Until God Shows, his new vehicle channels the likes of such forward-thinking hip-hop frontmen as Frank Ocean and Kendrick Lamar, taking Owens’ sound in an entirely new direction that’s a million miles from the scene he came up through. After some time to let the new music sink in with fans, Owens is back with another single, “dottedXlines.” Not only do we have an exclusive first listen, we spoke with Owens about where he stands with heavy music and what we can expect to see from BXC in the future.

Can you start from the beginning? What inspired badXchannels and how did it all come together?
You know, I’m not really sure. I’ve always had an affinity for this style of singing. It was really what made me first fall in love with music. Fast forward to now, and the open space created with the movement of electronic music in pop, indie and hip-hop acts continuing to push the bar creatively. How could I not want to be a part of all that?

You mentioned that when you hit the road later this month, it will be just you and a DJ, but you will eventually incorporate live musicians. Can you give fans an idea of what that will look like?
So badXchannels will be touring in Indianapolis, Detroit, Chicago, Sacramento, Los Angeles, Phoenix, Brooklyn, Boston and Philly—a total of nine dates. On this run, I’ll be playing the entire EP that comes out Nov. 18 and my dude DJ Johnny Storm from Detroit will be coming along with me. In the future, as touring happens, I’d love to see this entire thing grow.—musically, live, aesthetically, branding, etc. I’m looking forward to all of the cool things we can do creatively on the live front with a few others joining. I just wanna keep creating.

Today we are premiering “dottedXlines.” Can you tell us a little bit about the vibe and inspiration behind this song?
This track is pretty self-explanatory, lyrically. It talks about my time in the music industry and how I have felt about it in moments.

This project is obviously a departure from the heavy music many of your fans know and love you for. How has the initial response to the first single been?
I think there have been hints of badXchannels shining in a lot of my past music, but you’re right—it is new. The response has been really great! I’ve received a ton of support from new and old fans alike—peers, as well.

You listen to a lot of music. What are you loving right now?
Yeah, it’s still one my favorite things to do. Been on Smino, MTNS, some Travis Scott and Amine’s “Caroline” lately.

You’ve made it pretty clear that you wanted to do something that would surprise people and move in a new direction with your musical career. You’ve also confirmed that Chiodos have come to an end after 15 years. Are you leaving heavy music behind for the foreseeable future?
I’m producing quite a lot these days, so I’m always around heavy music. Producing, creating and living in the songs.

With the announcement of Chiodos ending, we had many readers comment about your post-Chiodos band, D.R.U.G.S. Even though it was around for a short period of time, that band made a huge impact on a lot of people. Do you still have fans ask you about that band or tell you that they want to hear new music by that outfit? There were rumors in the past about the possibility of a reunion, but that never happened.
Yeah, I still get asked about D.R.U.G.S. all the time. Everyone seems to be happy doing their own thing right now.

In addition to badXchannels, you produced the latest album by Hotel Books. Are you looking to do more production work? Do you have any other collaborations or projects in the pipeline or in the foreseeable future?
For sure. I’m in the studio almost every day working with someone awesome. Actually finishing up a full-length today. An exciting part of what I’m doing with badXchannels is the collaboration. Getting back together with Kuniva from D12 soon, Tyler Carter from Issues is on the EP, my friends Jon Connor and Missio. Also, shoutout to some of the awesome bands I’ve worked with so far this year: Marina City, Dependence, SYLVN, City Of The Weak, Seroletto and Heavensake.

Do you have a musical “bucket list” of people you want to work with, creative avenues you'd like to explore or other projects outside of music altogether? If so, which ones are easily attainable and which ones are further down the road?
Desiigner or Royce Da 5’9” would be dope. Suicideboys would be interesting. Bucket list would be like Black Hippy or Flying Lotus or Jonny Greenwood, Omar Rodriguez, Eminem, etc. Outside of music, I do Cheer Up Kid! Clothing and a lot of visual art. I am always creating something in my head.

Who do you think would win a dance fight: Frank Ocean or the Weeknd?
You need to throw Chris Brown in there. That dude can dance. alt