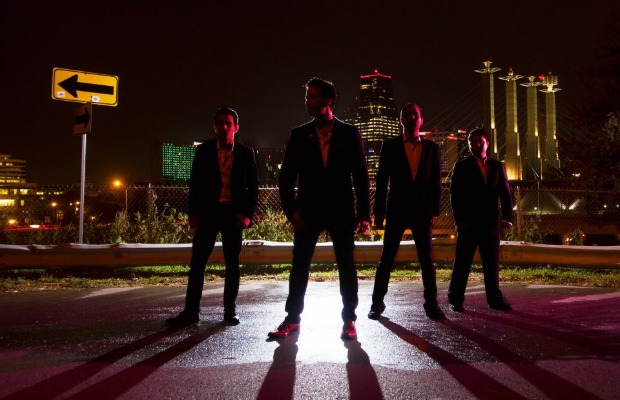 Last fall when we premiered the (Kansas City) Architects Border Wars Episode II and previewed its graphic novel companion, vocalist Brandon Phillips had some impassioned words about uncompromising creativity and the world that often inhibits it. “We live in an age of amphibian attention-spans, rampant stupidity and an economy for music and art that oppressively forces everyone from the artist to the fan into grotesque contortions of gutless compromise,” he had said. “Border Wars is our Declaration of 'Go Fuck Yourself' to all the candy-assed charlatans who would tell us what we can or cannot do with art, with music or with stories.

With just 10 days left to reach their PledgeMusic goal for Border Wars Episodes II and II, we reached out to Phillips to expand his thoughts on daring to further your art in an environment that often tells artists to settle.

If you’re not trying to improve your art, kindly fuck off to Mars.

For the love of fuck and all that is fun and fulfilling in this short life, raise your expectations, chickadees. We are the underground–the ones who make albums whether there is a label or not, the ones who make films without Pentagon-sized studio budgets. We publish zines full of art, writing and reportage with as little as a Kinko’s Copy Card or a Tumblr account and we are so goddamn good at it that we’ve changed the course of popular entertainment several times in the last 30 years simply by being ourselves and making the stuff we want to see, hear and read with our own hands.

As I’ve said before, punk rock taught me to be myself. Not only that but to be myself aggressively, especially when I find myself swimming against the current of mainstream ideas. Border Wars, the album that my band, the Architects, has been working on for the last couple years is a realization of that value. Border Wars is an album that only the Architects could make and it is all-Architects from the first note of music and the front cover of the comic, to the final page of the final episode and the last fade out. It’s our idea of a punk rock and roll opus and although someone else could imitate any of the individual parts fairly easily, the concept only works as a whole because the Architects are the glue holding it together.

This is an especially poignant bit of personal pride for my us because Border Wars required that we really dig deep and take on a lot of risk. If we blow it, we may as well wear clown shoes for the rest of our creative lives. It would be far easier to play it safe, make some EPs, tour with bands that sound just like we do and just be another van full of smelly dudes waiting to shower at the Flying J.  Bands do it every day. Don’t buck the trend, hump it! Get the hairstyle and the clothes and the auto-tune pedals and tour the world like Peter Pan with a hit of ecstasy in his ass – euphorically living the delusion that we are just one more pill away from being Kanye or Keith Richards.

Some dreams really are meant to die, and it is long overdue that I drown this one in the bathtub. Fuck being Kanye or Keith Richards or Bono. Fuck trending hashtags, fashionistas and reality TV. All that crap that looks like success is a cold, gutless fairy tale spun by old assholes to encapsulate what they think it means to “have it all” and rationalize why they blew their chance. Speaking for myself, there is simply no way that I’m going to allow the generation that had the Seeds, the Stooges and the MC5—but chose fucking Jimmy Buffett instead—tell me how to live.

Punk rock and alternative music got its hooks into me very early. And when the music and I found each other, it truly seemed like bands actually were reinventing the wheel.  Artists who stocked shelves by day at grocery stores were auteurs by night, smashing genres, founding labels and movements, defining the aesthetics of rebellion for a million other weirdos. Some of those artists and movements blew up and found their way into the mainstream. Some did not. The relative commercial success of any of it is far less important in my view than the fact that it was all being done out of our parents’ basements.

We could pile up some pawnshop recording gear, use a coat closet as a vocal booth and put something out into the world. And as some bands showed over time, a lot of what we were doing in the basements of America was actually pretty cool. Shitty pop video countdowns were suddenly a lot less compelling because we were sound tracking our own lives, dreaming up our own fashions and creating the honest, individual identities that the square world had always seemed to deny us. I won’t lie, it felt a little magical and that magic is part of what has kept me making music my whole life.

The status quo for underground music in 2015 is an Orwellian fucking nightmare.  Silicon Valley tech firms treat the musicians and artists that drive their precious traffic like slave labor. Major labels have so little effect on the average musician’s life that they may as well not even exist. Smaller labels have adopted the same standards and practices that used to make major labels seem like Emperor Palpatine, and a huge number of underground bands have swallowed whole the mainstream media idea that the only worthwhile person is a millionaire with a line of flavored vodkas.

Now add the seemingly endless parade of scene-queen, snore-core bands who are all so desperate to look, sound and flex like one another that the combined energy of all their flatirons could power the Western United States for a year. Yes, the joke is somewhat cheap, but the creative vortex is real and truly painful to witness when one is aware of the vast creative potential of the kids who live below the radar.

It is a sad day when a band can wear full costumes and make-up, play music influenced by death metal and hardcore and still manage to bore my tits across the galaxy. However, I am loath to blame the band themselves. They are just a product of their environment–a world where the “hot or not” contest has been elevated to such a place of veneration that even the underground has become a work farm of spineless livestock, cowed into conformity by corporate fashonistas, babbling incoherently and clicking the “like” button with trembling thumbs.

Picking up an instrument does not automatically oblige you to reinvent the wheel. In truth, most good songs are absolutely good enough on their own – whether it’s Aretha Franklin singing it over a piano or Gallows screaming it into the faces of a festival crowd. A good song is really all I ever ask for when I cue up a new album. But again, dig your expectations out from below the bottom of the barrel and demand a little more from your favorite bands and from yourself.

Once upon a time, a very smart guy told me to look over my record collection. Spend a moment or two on every title, think about what that album sounds like and what songs are on it and then move on to the next one. When you’ve spent a few moments on each record on your shelf, then try to envision the one record that is missing from the collection–the one that takes the best of all the others and becomes the thread that ties the entire collection together. Think about how that imaginary album sounds. What kind of songs are on it, what the artwork looks like. Spend a couple moments imagining that album, then go write it and make it.  That is your album–the one that only you can make. For the Architects, and myself, that album is Border Wars. You have to figure out what yours is–and it’s not going to be easy–but when you’re done, I’ll be here with the rest of the weirdos waiting to hear it.