Creepy, dead, murderous and downright weird, the ’90s offered an array of toys that wouldn’t cut it in 2019. From dolls modeled after horror films, a board game that would let you connect with the spirit world and a media player that only sort of played your favorite song, ’90s toys are now collectible, and some are even worth tons of money.

Check out this list for some Halloween ideas, goth decor and a stroll down memory lane.

In 1998, Ed Long and Damien Glonek dreamed up a line of horror dolls, coined Living Dead Dolls. Originally produced as handmade dolls and sold via mail-order from Unearthly Possessions, Mezco Toys eventually started mass producing Long and Glonek’s creations in 2000. Each doll came with a death certificate, chipboard poem and accessories in a coffin-shaped box. Their first doll, Sadie, featured a very Wednesday Addams–esque appearance with long pitch-black hair, black dress with a white collar and black flats. Sadie’s death certificate reads “No one cared how she turned up dead. So Sadie chose to rise instead. Being easily forgotten wouldn’t be fair. Death was something this child had to share.” Sadie has since been laid to rest, but you can still get mint-condition dolls on eBay if you’re feeling spooky.

The Ouija board has been around for centuries. Advertised as a “talking board” or “spirit board,” the game is supposed to connect earthly beings to the spirit world. Featuring a full alphabet, “yes” and “no” and numbers 0-9, Ouija boards let spirits guide your marker to the answer you seek. Patented in 1890, Ouija boards were made for a century before being redesigned as a children’s toy by Hasbro in 1991. While marketing efforts were made toward asking the spirits if children would have to go to school tomorrow, many claim that they’ve spoken to their ancestors or the haunts around their home.

Originally created in 1964 and marketed as a companion to the Easy Bake Oven, the Creepy Crawlers Super Oven was a small plastic oven that allowed you to create rubbery bugs and toys from a liquid called Plastigoop. The Plastigoop was poured into metal molds and heated in the oven until the bugs or creatures (in this case, special edition Power Rangers) were done cooking. Then you could hide the bugs under your sister’s pillow, scare your mom or send your grandma into a tizzy.

In 1998, McFarlane Toys dropped their Movie Maniacs series, which allowed horror fans to fall asleep next to little 6-inch replicas of their favorite murderous mates. Series 1 featured Leatherface of The Texas Chainsaw Massacre, Jason from Friday The 13th, Freddy Krueger from Nightmare On Elm Street and Patrick and Eve from Species II. While the Movie Maniacs figures petered out in 2007, you can still adorn your bureau with horror replicas. Check out the full collection here.

1998 was a good year for horrifying toys. Tiger Electronics hopped on board with the talking, furry… owl? Hamster? While this electronic robot toy wasn’t a specific species, 1.8 million of them were sold in 1998 alone, jumping to 14 million sales in 1999. The talking creature began speaking in “Furbish” but would soon learn your voice and be able to hold a small conversation with the user. If that’s not terrifying enough, Furbies would also randomly “wake up” in the middle of the night and begin talking out of the blue. In 2005, Hasbro bought the rights to Furby and created a new line that were larger and had a facial recognition software to interact more with their users. In 2012, Furbies were modified further to interact with your phone. Still creepy, Furbies can be bought wherever Hasbro sells toys. Fun fact: Furbies were actually banned by the NSA in 1999 because they believed Furbies were a threat to national security.

In 1987, Boglins were born. Marketed as creepy hand puppets you could manipulate, these toys were originally modeled after goblins. Featuring a lever to move their glow-in-the-dark eyes, Boglins were operated by putting your hand inside to make them talk. The original line included Dwork, Vlobb and Drool and later evolved to include Halloween-themed Boglins, Mini Boglins and eventually a Boglins game. 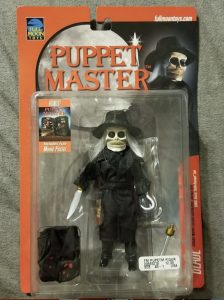 In 1997, Puppet Master brought their evil to life with Puppet Master action figures. Series 1 included Blade from Blitzkrieg Massacre, which at the time sold for under $30, but can now be found online for $200 in mint condition. Blade comes complete with a backup knife and a blood-spattered “battle-damaged coat” in the action figure variant.

Monster Face was the Mr. Potato Head for lovers of things that go bump in the night. Distributed by Hasbro, each box came with a monster head and attachments to modify him to your heart’s content. Including a slime nasal drip, pulsating blister and glow-in-the-dark teeth, Monster Face was every little Dr. Frankenstein’s dream.

While not actually scary, HitClips are horrifying in the age of 2019. HitClips themselves were small VCR-like media players often shaped like a boombox that you inserted a little cartridge into to play a clip of your favorite song. No longer than 30 seconds, this clip mostly included the chorus of Top 100 songs from the radio. Each HitClips had a ring where you could attach multiple cartridges to carry your favorite clips with you at all times. Fortunately, HitClips died in 2003 with the emergence of real MP3 players.

Which ones do you remember owning? Let us know in the comments below.