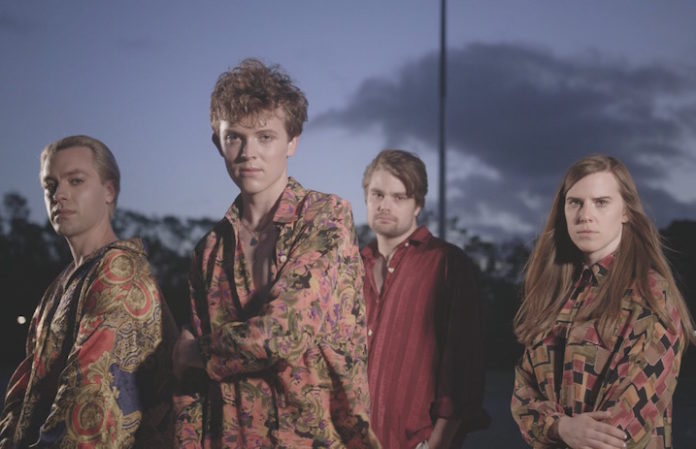 Nelson explains sharing their story wasn’t exactly his goal, but he went through a lot of personal development after the release of Cub Sport’s debut album, This Is Our Vice, in 2016, including coming out as gay. After many months of writing about new experiences, it came time to put the album together, and they “had this timeline and it ended up being this story of us finding our way to each other,” he says.

In July, a few months before BATS released, Nelson and Netterfield got engaged.

There was just one problem: They couldn’t start planning a wedding just yet because same-sex marriage wasn’t legal in Australia.

WE'VE GOT SOME EXCITING NEWS!!! ������‍❤️‍��‍�� Hey @TurnbullMalcolm we've got a wedding to plan – how about we hurry up and legalise it?! pic.twitter.com/BNhs7UjpWW

It took five months for a change to finally happen and, on Dec. 7, Australia’s Parliament passed the marriage equality law. The approval followed a national referendum that showed the public support for gay marriage.

“It feels really incredible now that's gone through,” Netterfield says. “There are people we know who have been engaged or have been together and unable to get married for over 20 years, so to be able to see those people actually with a wedding in sight is pretty exciting.”

However, the new law doesn’t only affect their personal lives. As artists, “it just makes it easier to keep being yourself and to express ourselves clearly,” Nelson says.

He says they are fortunate that the music industry, as most creative communities, makes it easier to be outspoken and open about one’s sexuality, and they’ve received a lot of support and kindness from people.

“We feel really lucky to be surrounded by people who understand what we are doing,” Nelson starts. “And also really touched that we could see quite a lot of the community made a really big effort in the last few months to voice their support of the LGBTQ community. We've seen so many people come out and actually go out of their way to spread a message of inclusion and love.”

Some of these people are, as they say, on the other side of the world. “We keep getting messages from people, especially in the States, where we don't get to go as often, from people who've connected with the album,” Netterfield says. “They send messages saying, ‘Thanks for sharing the story, for being honest.’”

These fans will be able to see Cub Sport live next spring, during their first North American headliner, which comes right after their biggest Australian headlining tour to date. “To have people engaged and excited and actually coming to the shows on the other side of the world, it's pretty surreal,” Netterfield says.

And this is just the start of 2018 for the band, who are still planning on releasing singles and returning to U.S. later in the year, all the while working on LP3.

During this run, their story hopes to inspire a lot more people to find their true selves. Nelson understands that: “It's a really sensitive journey, and [music has] given a platform to share the journey with people and hopefully encourage and inspire people who might be facing more struggles [than] we did throughout the journey of coming out and being who we are.”

Catch Cub Sport on tour in Australia and North America in 2018: