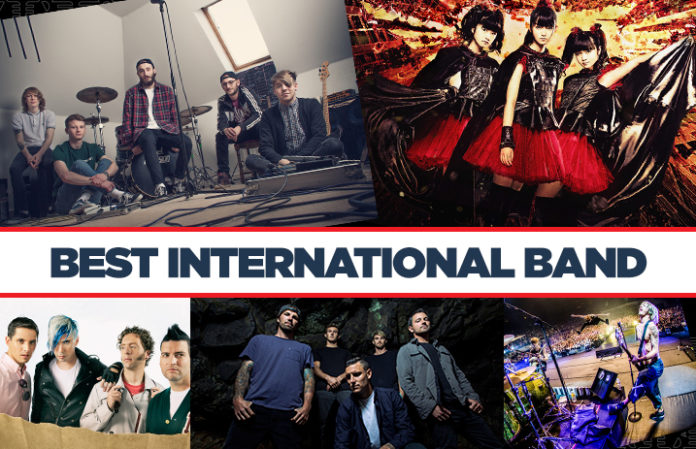 Oh, America. So often you act like everything is boring and your cynicism blooms like pain-in-the-ass pollen making our eyes and nose run with great sadness. In an effort to show you how weird and/or wrong you can be, we asked all of the nominees for this year’s International Artist Award a quite crucial question: What was the greatest culture shock you encountered upon visiting the US for the first time?

Josh Franceschi, YOU ME AT SIX
When we first came to America, I was 18 or 19 and I was used to going on tour in England and playing a maximum of 10  shows and being back home in two weeks. You get in a van in America, you ask someone how far the next show is and you are told it’s eight hours. The enormity of America got me, I just used to think “How the fuck is this place so big?”I was also shocked at how freely accessible guns were, I still am actually, I think it’s mental that I can go out with friends who have a gun in their shoe.

Patty Walters, AS IT IS
There were all kinds of little things that weren’t spectacular to me but were amazing for our band. A trip to the supermarket was magical to them because of the sheer amount of choice, the rainbow of food products available was no surprise to me but blew their minds. Our band felt spoilt for choice every time we went shopping!

Takahiro Moriuchi, ONE OK ROCK
I’ve been coming to America with my family since a young age. It was the opposite of culture shock:It was everything I wanted it to be and remembered it to be. As I learn the language more, I grow closer to the culture.

Josh Ramsay, MARIANAS TRENCH
There really aren’t any night and day, massive differences I experience. Culturally, we’re very similar. I think one thing that we saw as a band was a different audience. We have a more diverse audience in the United States than we do in Canada. For whatever reason, we got the teenage girl fanbase first in Canada and that created a stigma with critics back home. In the U.S. we don’t have that. You see more guys and different ages in the crowd when we play over there.

Winston McCall, PARKWAY DRIVE
Biggest shock for me? The food and size of the place. In Australia, you can play seven major cities and in America it’s just endless. We definitely had our “Wow, the world is gigantic” moment playing America for the first time. Also, coming from hippyland Bryon Bay where everything is organic and sourced from the local farm and then going to Taco Bell or whatever roadside truck stop food we could find was a shock, both to the digestive system and the flavor palette. We never understood what fast food was before we came to America.

Su-Metal, BABYMETAL
We were mostly shocked at the scale of things abroad. Everything was bigger than in Japan. The cities, the vast expanse of land, many people there were living their lives actively and the huge portions of food!
We usually enjoy the wonderful food of each country and channel the energy we receive from the local delicacies into the power we use in our concert performance. That is why we always look forward to visiting new cities to check out what delicious dishes they have to offer.