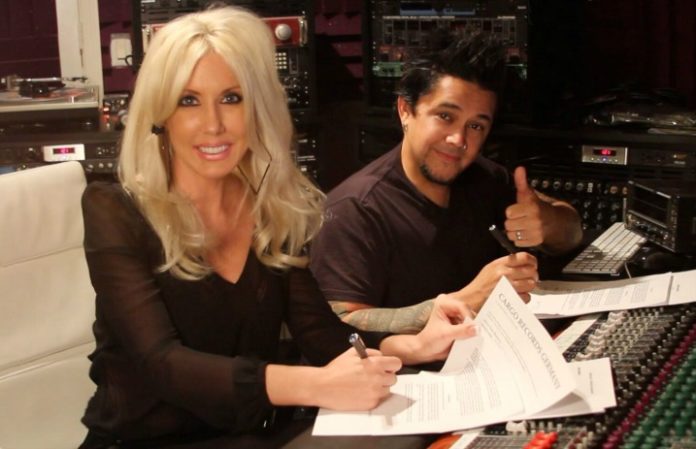 Jen Abeyta is a lot of things: a wife, a mom, a teacher, a personal assistant, an accountant, a graphic designer—the list goes on and on. Oh, and she started her own record label. Abeyta (along with her husband Aaron Abeyta, better known as legendary California punk band NOFX’s El Hefe) founded the Los Angeles-based record label, Cyber Tracks in hopes of creating a label that allows artists like Unwritten Law, Implants and Counterpunch to share control, revenue and decision-making equality, unlike some labels that often have strict business relationships with artists. Sure, she might be the wife to one of the most well-known guitarists in punk-rock history, but Jen is making a mark in the music industry all on her own accord.

You describe Cyber Tracks’ business model as “for artists, by artists.” What makes it different than other labels?

We’re very boutique, DIY and we’re very personal with the bands. We make decisions with them. We’re all a team. It’s not like the label-boss-talent type relationship. We’re just all a team and a family, so we make decisions together. We share revenue equally between the label and the artists, which is very hard nowadays to make money doing it that way, but I don’t know anybody who shares master ownership 50-50 or pays out a 50 percent royalty rate, so that’s definitely a difference. We’re very hands-on with the bands. I work better that way—being able to work with them one on one and together as a team.

It’s just you and your husband running the company?

Yeah, it’s just me. Aaron will get on meetings with me or when it comes down to actually signing a band. He’s on the contracts, he’ll come to the meetings and we’ll have a signing party and initiate everything. Sometimes he’ll get on some phone meetings with me, but yeah, other than that, he helps me with shipping. I do a lot—I do all the artwork when it comes to the templates for vinyl and CDs. I taught myself Flash, Photoshop, HTML code and web design and programming.

Do you feel it’s more difficult for women in the music industry to start their own business? Have you experienced any of that personally?

I don’t know if it’s harder, but I feel like people don’t completely trust a woman and what she says. Maybe they don’t give them enough credit. I definitely know that people look at me differently. I think they underestimate me a lot—maybe the blonde hair, I don’t know. But I know people underestimate me, and actually, that works in my favor a lot. I do think women in any industry—and in any profession—can come along with less expectations than men get. I’m starting to carry my own weight finally, and not be so much in my husband’s shadow. I think a lot of it is how you carry yourself. I think a woman with a lot of confidence will be respected a lot more by everybody.

What is your key to balance everything?

I think having a couple beers at night before I go to bed usually helps. [Laughs.] I just go for it everyday. I’m definitely not a lazy person. Some days I wake up and I’m just kind of down, and just really overworked and exhausted. Mentally, I feel like I just want to lay in bed all day. But I wake up to hundreds of emails, and I just start at the beginning and go through them one-by-one. [Laughs.]

Have you always been a fan of music?

I started playing piano when I was three years old, and I was just a natural. I taught myself “Für Elise” and Beethoven’s 5th [Symphony]—not to where it was the entire song or the perfect notes, but I played it my own way. I picked up a guitar at age 12, and started teaching myself how to play. I’ve always been into music. I played the flute in my elementary school band.

It sounds like whatever you want to do, you just do it and teach yourself.

Yes! And you know what, I taught my husband that. When I met him, he was like, “I want to start producing bands.” He was so passionate about it, and he was researching all these producers. He’s said maybe I should go back to school for it. I drove him to Barnes and Noble and started with book one. It ended up to where he can’t even find a book he hasn’t read yet. He’s read them all, and he knows so much now. Why do people just sit around and say, “I wish I could do that”? Just go do it! That’s my thing. If you don’t know, figure it out, or if you want to do something, just do it. He’s like that with anything now. I’ve always been that way. When I want to do something, I just do it. I’m a go-getter. If I want something, I will have it.

Back to Cyber Tracks—what’s the next thing you’re going to go after?

I have four releases coming up this year, starting in August, so it’s going to be a lot of work for me. They’re back to back. I don’t have gaps between them, and I just need to get through those right now. These are very good releases. I’m so proud of them, and I can’t wait to put them out there and see the people's reactions.

It’s awesome that you’re so one-on-one with the artists.

I think that’s the way it should be. Sometimes that can turn out in a bad way; some people could take advantage of that. I want them to be involved. My goal every time I release an album is obviously to release something amazing, but also I want my bands to be happy. I want them to feel 100 percent confident with what we release, the album itself, the whole duration of us working on it. I want it to be a good outcome for everybody. And I want that to go around. That’s the other thing—the 50 percent—music isn’t selling that much these days, but I want my bands to go around and be like, “Yeah, I’m getting a royalty. I got paid a royalty.” I hear so much, “I haven’t gotten a royalty in years,” and I want people to go around saying, “Well, yeah I just got one.” I don’t feel right taking more than I think I should, as long as I recoup what I invested in, why is it fair for me to make more than the talent who actually created the product? I don’t feel entitled to take from someone’s talent. I have a hard time taking even 50 percent. [Laughs.]

Do you hope that talk might change the way it all works maybe one day?

I doubt I could be cool enough to pull something off like that. [Laughs.] But I love the fact that I think I’m setting a good example, and I think people respect what we’re doing, which is important to me.

What advice do you have for anyone who might want to start their own label or get involved in the music industry in general?

I definitely think that nothing in the world is impossible. And if you want something bad enough, you can make it happen. I think as far as the label stuff goes, starting a label is difficult. It’s not the best investment nowadays, but it’s doable. Like I tell everybody, you have to adapt to the changing industry and how it’s evolving digitally and if you can’t keep up with that, if you can’t adapt and adjust to that then, you would probably not do so well, but yeah, be smarter than the industry. Think outside the box. You just have to work hard.