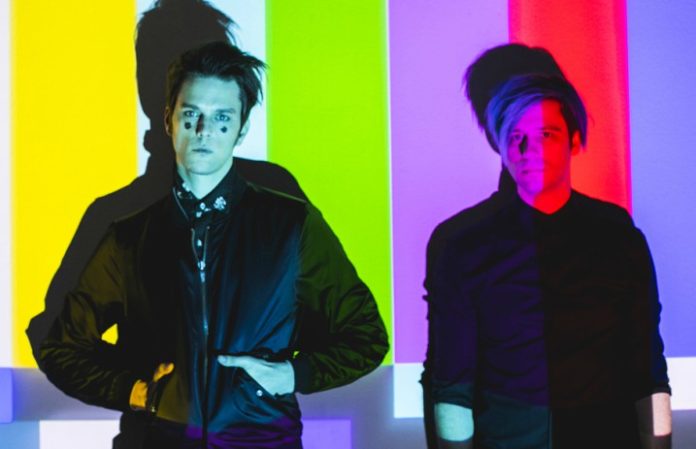 For the past few months, you might have heard rumblings of secret shows of a new band called I Don’t Know How But They Found Me. The duo includes Panic! At the Disco’s long-time bassist Dallon Weekes as its glitter-teared frontman, and ex-Falling In Reverse’s beautifully blue-haired drummer Ryan Seaman. Their long-awaited official first single, “Modern Day Cain,” was released last month and rose up to No. 8 on the iTunes Alt Rock chart within just a few hours of release, beating out heavyweights Imagine Dragons and Fall Out Boy.

Perhaps expected by the fans — who hyped up the single so much that some were posting images of themselves refreshing their Spotify accounts over and over until the song appeared — the popularity of “MDC” was undoubtedly unexpected by the band themselves. “We never expected anything like that to happen,” Weekes says. “Fans are constantly surprising us — it’s hard to keep up with them.”

The song features a mixture of genres all the way from ’80s Wham!-like synths, to the Killers-like rock, topped with a delicious “future-crooner” vocal from Weekes that has been somewhat unexpected from fans. When trying to categorize just what “genre” the band is, though, they’ll likely say it’s a hybrid of indie rock; “Glam Wham!” is perhaps a bit of a more accurate category. The sounds of “MDC” seem to range all the way from 8-bit analog samples, such as Speak n’ Spell, to distorted psychedelic guitars; however, regardless of what sounds are used and genres decided upon, the tune is mostly a tasty new side of Weekes and Seaman that the fans are eating by the helping.

Read more: P!ATD’s Dallon Weekes debuts first song from new project, I Don’t Know How But They Found Me

On the same day of the song release, the official video was released, offering up much backstory, but also giving rise to even more questions about the mystery of the band, from their name to just WTF the “Superstar Showcase” is. The video is said to be based off a YouTube video that Weekes found featuring a cable access television talent show from the early 1980s. He was intrigued that every act on these shows seemed to think this appearance would be their inevitable big break. Weekes simply wanted a way to appear on the show without time travel at his fingertips, thus spawning the idea of IDKHBTFM’s origins: a band from the 1980s whose tapes and recordings had gone missing… until now.

With all the secretive hype around this mysterious duo, there have come a strange amount of fan accounts on absurd topics, and even more absurd rumors surrounding possible animosity between any and all ex-members of Panic! But let’s stop that train right here, and let everyone know that there’s officially no beef between Weekes and anyone. “I owe a lot to Panic,” Weekes says. “It’s been the best (and longest) job I’ve ever had. Whatever happens with that camp in the future, whenever they need me or want me to be there, I absolutely will be.”

Fans can rest assured there’s a new secret bubbling: There are more songs already recorded and waiting to be released. “I hope fans will be surprised,” Weekes says. “Nothing on the record is too ‘same sounding.’ We’re going to move forward with no expectations or pressure on ourselves. More than anything, this is supposed to be fun, so we intend on keeping it that way as best we can.”

To hold you over until the next 1983-themed music video, we got Weekes to dish 10 secrets about IDKHBTFM and “MDC” — since he seems to be really good at keeping things to himself.

UP NEXT: DALLON WEEKES Q&A