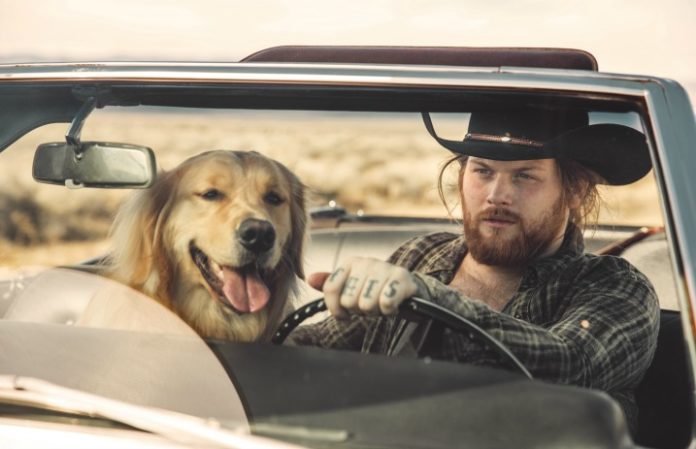 At the start of this month, Danny Worsnop dropped a surprise video for his second solo single, “Out Without You.” The entire concept came together quickly—it was shot on the cheap before the ex-Asking Alexandria singer left Nashville for Los Angeles to see his friend Andy Biersack get married, continue working on his long-awaited solo debut and began writing new songs with We Are Harlot. AltPress caught up with Worsnop by phone during his travels to talk about Nashville, Hollywood, quitting hard drugs and keeping himself together.

You spent the first few months of this year living in Nashville.

DANNY WORSNOP: I’ve got my place in Los Angeles, but with getting clean and trying to become a regular human in society again, rather than the kind of maniac that I used to be. Los Angeles is a city with a lot of temptation, so when you get out of that world [of substance abuse] it’s hard not to get sucked back in. I became something of a recluse there. I have a very small friend circle that I’d hang out with, and outside of that I just wouldn’t go anywhere—I’d sit at home and be miserable. Over time, I was like, “I’ve got get out of LA.” Nashville has always been one of my favorite cities on Earth. I never moved there because every time I’ve had a favorite thing, I’ll start doing it and kind of ruin it for myself. But we all know I drink a lot, we don’t know how long all this is going to last, so fuck it, I may as well spend my life somewhere I really love to be. I didn’t regret it for a second. I literally got up one day, packed up one of the cars and drove there.

“…we all know I drink a lot, we don’t know how long all this is going to last, so fuck it, I may as well spend my life somewhere I really love to be.”

Where are you living when you’re in Nashville?

I’ve been looking at houses, and I think I’ve found the one. It’s going to be great! It’ll be like the Playboy Mansion does Nashville. There’s a big, glass swimming pool you have to go through in the driveway. I’m really excited. It’s a lot cheaper than I had planned. You can get a lot more house for your money in Nashville than in Los Angeles.

Matty Mullins from Memphis May Fire lives there.

Obviously he’s a really good friend, so we see each other when our touring schedules [are in sync]. We go to hockey games. Here’s one thing that’s pretty funny—you know that old saying, “You know you might have a drinking problem when you move and your bartender follows you?” The bartender I’d see most of the time in Los Angeles moved to Nashville around the same time I did. [Laughs.] But, I mean, it’s a totally different world. Everyone here is kind of looking out for each other. A lot of places I’ve been, people are looking out for number one and that’s it. They will only do stuff for other people so long as it doesn’t inconvenience them. In Nashville, people are very friendly and want to help everyone. I felt like a completely different person after I moved, personality-wise, in my head. Almost all of the stress goes away and it just leaves so much room for creativity. I felt like I did more stuff in two months than I had done in my entire career before.

You mentioned getting clean. How long ago was that?

It’s pretty recent. I was always back and forth, but this is the first time it feels like it stuck.

Why did it stick this time?

Honestly, it was mainly the move. It got me away from a lot of the people that kind of instigated that side of me. I don’t mean anything against those people, but it wasn’t a good environment for me to be in.

When you say “clean,” are you still drinking?

So by “clean” you mean there are no more hard drugs in your life.

Yeah. I’m not going to get arrested anymore.

You grew up in a very small farming type area then threw yourself into Hollywood as a young adult. I would imagine Nashville is a nice balance for you.

I’ve never really discussed it, but I’ve been tempted on multiple occasions in my breakdowns to just say, “fuck it” and disappear. I would be looking up ranches in the middle of nowhere. I don’t think I could go back to that small world environment, but at the same time I hate being in the middle of the city. Nashville is the perfect balance for me.

“I ended up leaving [Asking Alexandria] because it lost the art to me. It lost its artistic integrity in my eyes. It was just selling out and that’s not what I do.”

My priority always lies with my art, and that has never changed and will never change. I ended up leaving [Asking Alexandria] because it lost the art to me. It lost its artistic integrity in my eyes. It was just selling out and that’s not what I do. People are wondering if there’s going to be a second Harlot record and yes, there will be. It won’t be this year, but there will definitely be another Harlot record next year. The band still exists. Since getting to Nashville, I wrote another 17 songs for my solo record. I’m still of two minds about how to release the album. I’m tempted to do something I know fans will love but the record labels and publishers will not, which is to release a double album. The idea of doing a double-disc with like 30 songs really appeals to me. How many years have I talked about this solo album? Four years? I want to give it to the world.

The Devil’s Carnival [a horror musical] sequel just came out on iTunes. What’s next?

Well I’m already bugging [director] Darren [Lynn Bousman]. “When are we doing the third one? Let me book my flight!” [Laughs.] I’m excited to get back into it and see how [my character] Smith develops and how the story goes. There’s a series I’m trying to get on for their second season and I’ll hopefully have some songs on another network show. The search for the next project continues. For the next several weeks, I’ll be recording my solo album and writing with Harlot for the new album. I’m excited about writing and recording in Los Angeles because I loved the city before I moved there. Now I can fall back in love with it—but just as a place I go every now and again. ALT