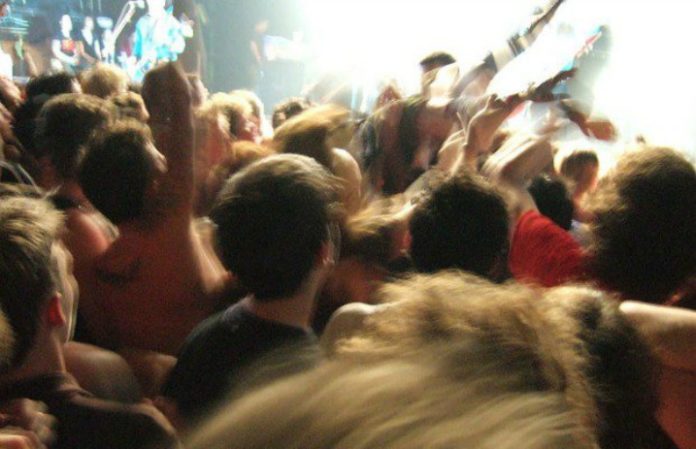 I once worked a retail job, and one day, my co-workers and I found ourselves talking about music. As it happened, everyone around me listened mainly to hip-hop, while I dreadfully awaited my turn to tell them I listen to hardcore and metalcore. Why, you may ask, is it such an annoyance to share my music taste? Because most of the time, no one knows what hardcore is, and trying to explain metalcore on top of that is basically impossible. The average person translates “hardcore” into what is really mainstream metal, Metallica and Slipknot being the two most frequent guesses. However, despite knowing nothing of the genres, they are all aware of one thing: moshing.

Read more: In defense of stage diving and why it shouldn’t be banned from venues

“Oh, my God, that’s so violent” is the remark I got that day (and the one I get all the time).

“Well, fights happen, but for the most part, it really isn’t violent,” I respond, like always.

“But you’re hitting each other, right?”

“Yeah, but it’s for fun.” That’s when the eyes widen, and they begin to look at me as if I were a rabid animal. If I could read minds, I suspect I’d be able to hear something like, “She’s crazy.” (In fact, sometimes people say that to my face.)

That is why I want to clear it up once and for all: Moshing is not the same thing as violence. For a lot of people, this does not make sense, but there is a difference between the two concepts. Violence begins with the intention to cause another person harm. Violence occurs because of malice. Moshing is not of the same nature. Moshing comes from a desire to unleash aggression. There is no designated target for flailing feet and fists in the pit; it’s about harnessing the aggressive energy of the music, which results in a euphoric, emotional release.

Unfortunately, violent and disgraceful fringe groups do exist, such as FSU, who have been officially labeled a street gang by the FBI. But that’s not even moshing. It’s just intimidation and fighting, inside or outside of a music venue. More often than not, moshing is purely about adrenaline and can actually foster bonding and the sense that you’re part of a community. You enter the mosh pit giving the unwritten OK that if you get knocked to the floor, you’ll be fine with that.

When put in those terms, it’s no different than boxing or MMA, which are two extremely popular sports with massive viewerships. And like these sports, there are certain rules inside a mosh pit: the No. 1 rule being that if someone drops, you pick them up. The bands on stage advocate it, and the fans on the floor follow it. Another prevailing unspoken rule of the mosh pit is to respect each other. You’re all there for a common purpose, and if there’s one jerk in the pit who starts to get violent, you toss them out. So while the pit may be considered a dangerous place, there is also an element of safety in knowing that your friends, and even strangers, will ultimately look after you if something goes wrong.

To everyone who rolls their eyes or gets scared when I tell them I like hardcore and I mosh, I challenge you to go to a hardcore show. Fellow show-goers, bring your friends who don’t listen to heavy music out to experience the subculture firsthand. They may be surprised to reach a newfound understanding and find out how much they enjoy it. In my experience, it works every time.