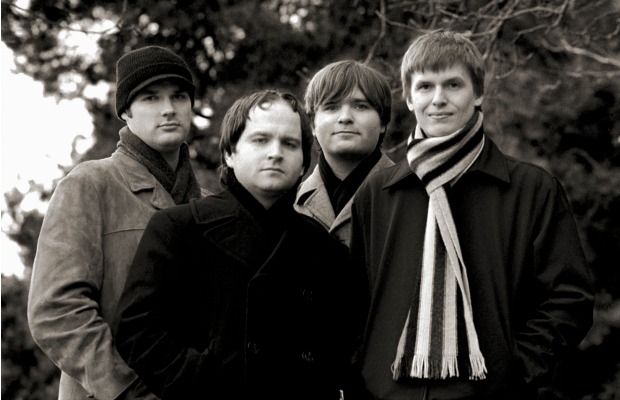 Some consider 2003 to be the Year Of Ben Gibbard. The singer/songwriter was responsible for the Postal Service’s Give Up and Death Cab For Cutie’s Transatlanticism, two of the most memorable reissues of the year and the subsequent decade. Even though Give Up narrowly edged out Death Cab’s breakthrough album in our Class Of 2003 special (AP 302), we felt it necessary to give Transatlanticism its deserved props. We spoke to Death Cab’s guitarist and sonic architect Chris Walla while he renovated his recently re-purchased Hall Of Justice recording studio in Seattle, the very place where Transatlanticism was made.

What is the first thing you think of when you think of Transatlanticism?
Probably that it’s the first record we made with Jason [McGerr, drummer] and I continue to believe that Jason saved our band in a way. We were at a point where we had been through three drummers in four years. The whole creative and power structure of the band was a dysfunctional trio before Jason came on board. It was worthwhile to continue playing music together, but it was tough. Having Jason’s perspective, calmness and his energy in the band–he has a levelness and a gravity about him that we really needed at that time.

Did you notice a change in Ben Gibbard’s songwriting around this time?
In the year before Transatlanticism, Ben really started treating songwriting like it was a career, really investing in it like a day job, an “I need to finish a song a day” kind of thing. There were a lot of songs for the record; he brought in 25 or 30 demos. His chops were getting better and he was self-editing less. It wound up resulting in some of the most genuine and straightforward writing he’s ever done, really open and unguarded in a way that was kind of new.

People know you’re the producer, but as band member you’re also heavily involved in the arrangement of the songs. Some of the transformation from Ben’s demos to the album versions are fairly drastic. How did that take place?
For example, “Transatlanticism” was originally two-and-a-half minutes. It was not epic, it was a pretty compact little song. As we were playing it, it just felt like it was unfinished in the way that it needed another part. But it didn’t need another part, we just needed more of it. We were tossing around a bunch of ideas about what to do with it and how to build or not build it, and it kept getting louder and louder. That one unfolded in the room pretty naturally.

Can you tell me about the changes that happened on “Title And Registration?”
We had the song pretty much tracked, and as I was mixing, it just wasn’t feeling settled and it wasn’t feeling right. It has a lot of suspension in it; harmonically, it was a really different song. The bass part, the guitar part and the weird crunchy drum thing all just happened while I was mixing. It’s a pretty dramatic departure from how it was originally.

Because of the Postal Service record, people assume the drums on “Title And Registration” are electronic, but those are real drums you destroyed with effects.
Yes. I used a Lexicon Varispeech. It’s actually technology that was developed for speech therapy, speech pathology and military research. None of it was really intended to be used to make rock records. It’s a really primitive 8-bit version of modern auto-tuning and pitch mangling. It’s still in my rack, and it still gets used every day.

The fidelity of Transatlanticism is notably higher quality than previous Death Cab records. Was that a conscious decision to step away from “lo-fi” recording after The Photo Album?
Not really. It just felt like it was logical. The thing about The Photo Album is we packed that entire record into 31 days. It was super-fast, and there wasn’t a lot of time for reconstruction and deconstruction, which has always been the part of my skill set that I enjoy the most. And there are a couple of songs on The Photo Album that are substantially more hi-fi than songs on Transatlanticism. I just went back to the master tapes for Transatlanticism and it’s funny; some of the drums are really kind of a mess but the vocals and guitars are great. It was a really fun record to make. It was a lot of work to make but it was all the good kind of work, it wasn’t the kind of knock-down-drag-out fighting with songs or bandmates kind of work.

In the months before Transatlanticism, I remember there was a feeling that this was going to be the record that really propelled Death Cab For Cutie into mainstream consciousness. Even so, the album seemed to exceed all expectations.
I was totally surprised and I continue to be surprised–kindly and amazingly and happily–surprised at how well it was received. We hoped it would do well but we didn’t think we were making a pivotal record; we were making the best record we could make, which is something I can thankfully say we’ve always done. I’ve worked on a bunch of really good records at this point, but so few of them end up connecting or landing at the right place at the right time. I think the world needs different records at different moments for different reasons. Sometimes you need to eat a pound of chocolate and it’s not good for you, and sometimes you have to eat a salad and sometimes you need to eat a huge steak. I just feel very fortunate and grateful to be a part of a record that I’m both fond of, proud of and people seem to enjoy. ALT