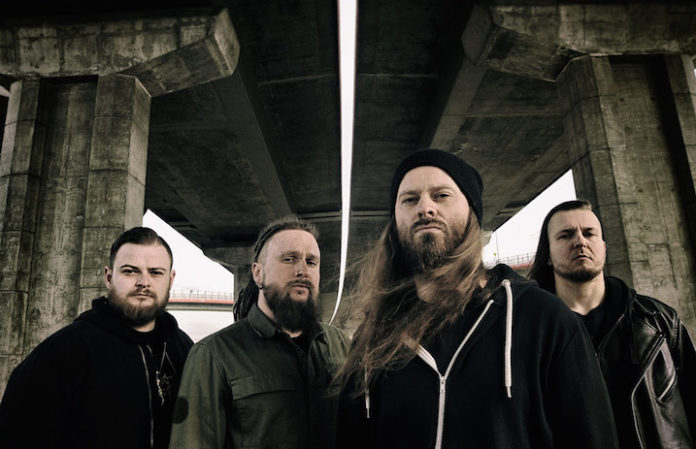 Refuse, resist, reinvent: This is the mantra by which Polish death metal stalwarts Decapitated have conducted their all-out rhythmic assault for the last 20 years — an assault that has earned them a rightful place in the upper echelon of extreme metal. Propelled by band mastermind Vogg, whose groove-laden swagger and technically precise command of his guitar is a staple of Decapitated’s sound, the band have endured more hardship and loss than most, but it hasn’t kept them from remaining one of death metal’s elite guards. After Vogg’s brother and Decapitated drummer Vitek died in 2007, the future of the band became uncertain. However, armed with a new lineup, Vogg revived Decapitated in 2010 and unleashed Carnival Is Forever, a lethal exercise in extremity that proved Decapitated was far from over. After touring with the likes of Lamb Of God and Meshuggah, they kept the momentum going with Blood Mantra in 2014, a record that hinted at where Decapitated would take their sound next.

Decapitated is poised to drop their seventh record, Anticult, tomorrow, July 7. The record marks yet another evolution for the band and takes their inimitable style a step further. AP has the exclusive premiere of “One Eyed Nation,” one of the more brutal cuts off Anticult that’ll take your head clean off (no pun intended). Take a listen below, and read our conversation with Vogg in which we chat about the new record, where his sense of groove comes from and what it means for Decapitated to still be going strong after 20 years.

Listen to “One Eyed Nation”:

Anticult is available for pre-order here and here.

You guys just wrapped up a short European tour with your fellow Polish death metal brethren Vader. How did that go?

Vogg: We just got back from a short tour in Scandinavia. It was a really cool tour, especially because we were touring with Vader — it was a co-headlining tour with them — and there was another Polish band, Thy Disease, and one opening band. It was a really great opportunity to meet our old friends from Vader because we don’t play together that often and it was just great to do this tour together. The shows were great, and to visit those countries like Finland, Sweden, Norway, Denmark, Latvia and Estonia was really something special. For example, it was the first time for Decapitated playing Finland, and I could see from the stage the enthusiasm coming from the people was huge, and I saw that people were waiting for us for years. The chemistry and energy between us and the people was unbelievable and something I will not forget.

The new album, Anticult, marks another evolution for Decapitated. The music seems much more streamlined, the compositions and arrangements are tighter, and it seems like the music as a whole was meant to appeal to a wider audience than past Decapitated albums. Was this intentional?

I think Anticult is the best album since the reunion. It’s the third album with the new Decapitated era, and the arrangements are the result of the experience we’ve taken from Carnival Is Forever and Blood Mantra. We are better musicians [by] the time when we do the next album, and with Anticult, we have lots of great ideas and we tried to arrange the songs to make them not too long so you don’t have to wait that long for the vocals or another riff. It makes the album more tight as a whole. [The record] is 38 minutes, and I think it’s the perfect timing for a Decapitated album. The most important thing for me if I talk about the Anticult album is that when you listen to it, from the first to the last song, it’s Decapitated. You can recognize the style. We’ve come to the point where we’ve created some kind of definition of our sound, and that’s a huge success of the album. I’m really happy about what we did with the songwriting — all the melodies, all the musical ideas going on on this record.

I have to say, also, that this album is one that we created together as a band. Our drummer, Michał [Łysejko], [helped] a lot with the arrangements and the songs. He’s like the co-author of the songs. It’s like I used to do with Vitek [Witold Kiełtyka]. I love this songwriting, and I think we created something really special. It’s the next level for us. It was a pretty big challenge to write this album. I’m also very proud of the rest of the band members, especially talking about vocals on the album. I think Rasta [Rafał Piotrowski] did a great job, and the vocals are more interesting and much better than on the previous album.

There are definitely traces of past Decapitated albums that can be heard on Anticult, but it’s still a new sound for you guys. Do you think this new album will satisfy old-school Decapitated fans?

It’s kind of a compilation of Decapitated styles. I think and I hope that every Decapitated fan will be satisfied and should not be disappointed. For example, the first song “Impulse” could fit perfectly with Organic Hallucinosis, and there are two really death metal songs, “One-Eyed Nation” and “Anger Line.” I think those two songs could fit with The Negation. And we have songs like “Kill The Cult” or “Deathvaluation” that represent our new style from Blood Mantra — rock ‘n’ roll and death metal riffs together. I still feel that we have something fresh going on on this album. We worked with Daniel Bergstrand, who set up the drums and mixed the album, and he did a great job. I think Anticult is the most pure sound of Decapitated right now.

“One Eyed Nation” is classic Decapitated: killer riffs, interesting leads and an undeniable sense of groove. You’ve always had a prominent groove element in your music. Where does the groove come from?

That’s a very interesting question. I don’t know… I just love groove. I think it’s one of the most important things when we talk about metal music. I’m a big fan of Lauryn Hill; it’s not metal, of course, it’s more soul music, but the groove the musicians have on their albums is unbelievable. I’m a big fan of that. But if I talk about my inspiration for making groovy riffs, I would say that Pantera was the band — they were the most heavy, groovy band on the planet for me, always. I found inspiration as a guitar player from Dimebag Darrell’s sound. His sound, for me, was the definition of the metal guitar sound.

This year marks 20 years for Decapitated. Does the band have any anniversary shows planned to celebrate the occasion, or are you just focusing on the new record?

We’re pretty much focused on the new record. It’s been 20 years already! We did about 15 shows in Poland to celebrate it, and it was a great party. We had a few guests. Our old vocalist, Sauron [Wojciech Wąsowicz], he was on the first three albums, he joined us on a few shows, so it was really, really cool to share the stage with him after 14 years. It was really great.

What do you think your brother Vitek would think of the music Decapitated has made in his absence?
I’m sure [Vitek] would be happy about our music now. He was the kind of person that was always down to earth, always supporting people. He didn’t have any of the rock star attitude; he was a very mature person. He died at the age of 23, so when I think about that… for me, back in those days, to be 25 years old, we already felt like old guys, but we were kids. I think it was a good decision to come back with the band, even though it was really hard to play without Vitek. It was pretty weird for me, but when I look back and see all the things we did after 2010 until now, it’s great! It’s a struggle every day, every show, every rehearsal to make [sure] this band [isn’t] worse than what we represented before the accident, but I think we’re doing a great job. All the band members, present and past, did a great job for the band. I’m very proud of all the people I’m working with and was working with… all the band members, musicians, the crew, everyone. ALT

Decapitated will hit the road in support of the new album later this summer. Joining them on tour with be Thy Art Is Murder, Fallujah and Ghost Bath. The tour runs from Aug. 20 through Sept. 23. All dates are below.

Decapitated tour dates with Thy Art Is Murder, Fallujah and Ghost Bath:

What do you think of Decapitated’s new track? Let us know in the comments below!