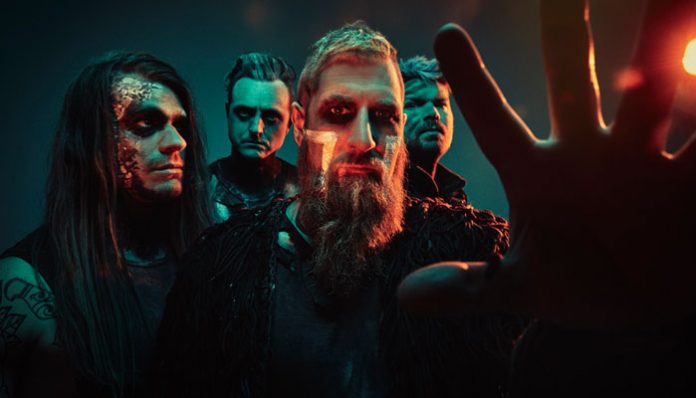 Ferocious metal outfit DED were ready and willing to bring their neck-snapping riffage and calls to action to the world at large. But Mother Nature had other plans. Fortunately, the band and director Marc Klasfeld were able to finish the video for a new single, “A Mannequin Idol (Lullaby).” It’s the first of two new songs released (alongside “Eyes Sewn Shut”). Check out the behind-the-scenes look at the making of the video below.

The pandemic is affecting all of us differently, but DED frontman Joe Cotela sees the unity it’s bringing. His attitude is somewhere between Bad Brains’ adoption of the positive mental attitude and hardcore icon Henry Rollins’ work ethic. He too wants to get in front of crowds with his band and throw down. But he doesn’t want anybody on any side of the stage to be endangered. Cotela’s stance is measured and thoughtful. And his band’s music will still tear your head off.

“It’s a human problem,” the DED singer says from his home in upstate New York where he’s quarantining. “It brings us together and knocks down the walls of separation and a lot of things I think. [The world] could be dreary and rough. The way I think is to take it day by day. All you have to worry about is what you have control over. Anything you don’t have control over, you can’t worry about because you can’t do anything about it. Focus on your health. Focus on things that make you feel honor and integrity. And if you feel good, it will enrich all aspects of your life.”

Cotela spoke with AltPress regarding a new consciousness in the heavy music community, the war on vacuousness message behind “A Mannequin Idol (Lullaby)” and whether or not DED have retired their cloudy-white contact lenses.

Regarding the title “A Mannequin Idol,” is that a metaphor pun on a matinee idol? Is that something you think is really worthy but is actually vacuous and wrong?

JOE COTELA: It’s a play on words for American Idol, but that’s not the whole encompassing idea. I’m a big fan of Every Time I Die and those tongue-in-cheek [puns]. The song is really all about false gods and consumerism in the music industry. In all industries, really. Just taking a look at what we identify with, what we consume and is it our truth? I just wonder if people blindly follow things or not.

Within the context of metal and heavy rock, are listeners looking for some sort of deeper consciousness? It’s not really about sex and drugs and rock ’n’ roll anymore. There seems to be a developing mindset happening in the heavy rock community.

I feel like there is a consciousness happening in the world. Honestly, I see people awakening to a lot of things. I also see the complete contrast, as well. Everywhere.

Read more: Every Time I Die just released a snippet of a gnarly new track

He’s got a launcher-type device on his back while ordering a sandwich at Subway.

Oh, my God. See, that makes sense for the contrast. My point of view is to hopefully reach people and just help them. Maybe that guy in particular definitely needs to take a step back. I don’t know if he and a lot of people have or want the tools to look inside of themselves, to want to question who they are and what their purpose is, what they identify with or what makes their soul feel fulfilled.

But I do see a lot of people, like you said, waking up some sort of consciousness. You see it with the food industry and people wanting healthier [meals] and eating organic. They want to watch independent films instead of ones made by corporate entities. And consuming music of all shapes and forms, you know. Hopefully [it’s] having people question what they’re consuming, what they’re supporting.

A lot of metal and hard rock is packaged as “the new hotness,” even though it feels like a Metallica B-side from 12 years ago. But it’s still “new.” DED’s new music is significantly different from Mis•An•Thrope. You’re looking for the deeper possibility.

I’m not necessarily just a metal person. I definitely come from more of a punk-rock world initially, but at the same time, I listen to metal and alternative—just anything that’s good.

I identify with the fact that we need to be called whatever we need to be called. And our band are whatever people perceive it as. People call it like a nü-metal resurgence of “nü-core.” Nü metal might be associated by a lot of people interpreted in a negative connotation. I really love all styles of music, and I hope that we represent everything.

Who are the people who essentially soundtracked your consciousness?

There’s certain things I listen to for certain reasons. I’m a huge Bob Marley fan. He speaks of peace and love, but he also speaks of rebellion and justice. So there’s anger there, as well. I’m a huge fan of Pantera. They make you feel like I’m a stronger person. If I’m having a bad day, I could be listening to a million things. I’m a big fan of Bright Eyes lyrics. I’ve always loved Conor Oberst’s lyrics. [Lifted Or] The Story Is In The Soil, Keep Your Ear To The Ground is a very pivotal, pivotal album for [me], lyrically. So there’s all kinds of things.

We’re all waiting for Mother Nature to stop hating us. And obviously, it’s slowed down everything. DED are signed to Suretone. You have “A Mannequin Idol (Lullaby)” and “Eyes Sewn Shut” into the world now. Are you feeling the strain of the pandemic against the release of your Suretone debut?

Well, we have the album finished. We did the whole album over the past year spaced out between touring. The album is ready to go now. There’s probably a couple of songs that we’re trying to figure out how to release in this new world that we’re in. So there really is a new frontier. How do you release it and get the right momentum behind it? We’re doing everything right now as we figure out how to pivot in this new world we’re in.

Are making videos a pain? Or do you approach them as an extension of what the band do instead of merely promotional certainties?

It’s your choice to look at how you want to do it. You’re going to do it. It’s inevitable. Do you want to have resistance to it and feel stressed and feel shitty about it? Then you can do that. But if you want to make the most of it and really enjoy it and make it an extension of your art, you have the choice to do that. I chose to embrace it, have as much fun as possible. It’s been about two-and-a-half years since our first album came out. And this is where we are now.

There’s also new people hearing us now, so we want to reintroduce ourselves to them. DED really thrive in the live setting. I think that’s where our strength is, so we wanted to do something that encapsulated what we look like live—the energy, the groove. We did capture that well, but luckily Marc is a fucking boss.

One thing missing from the DED video are the band’s cloudy contacts. Have you retired them?

[Laughs.] I’ve been asked that a couple of times. They’re now retired. We might do it here and there. We just didn’t want to be inside of the box of like, “We have to do this.” This is like saying, “You gotta wear the contacts every day.” We did it for three years straight. I think we’re just at a place where we wanted to change the vibe and do something new for the new album. This new aesthetic spoke to us. Maybe on the next one we’ll do some different type of thing. But it is what we wanted to do, and it was part of that album. We loved it, and it was cool. But for now, we’re not doing that.

Check out the video for “A Mannequin Idol (Lullaby)” below.