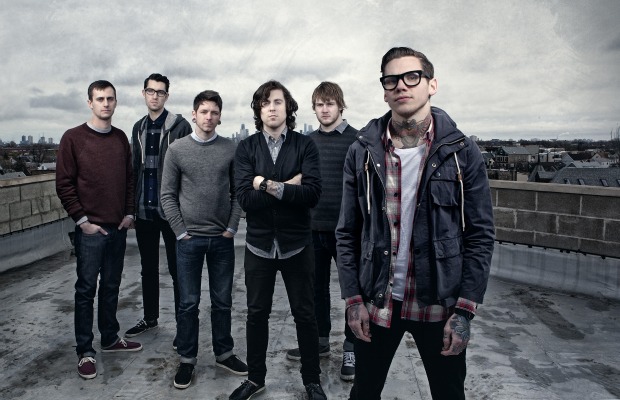 On October 11, metalcore outfit THE DEVIL WEARS PRADA expanded their hard-rockin’ empire into video games with the release of Zombie Slay. Available from the iTunes store for $1.99, the multi-level game was conceived by the members of the band and designed by Echo Interaction Group, for specific use on mobile handheld devices. Prada drummer Daniel Williams talks about the game’s origins and his personal gaming faves, as well as who may possibly get beaten up on their U.S. tour next month.

Out of everyone in Prada, are you the biggest gaming enthusiast?
DANIEL WILLIAMS: I think that Andy [Trick, bassist] would be the biggest. I would say I’m second.

What are your favorite games to play when you’re on the bus and on tour?
We play a lot of Call Of Duty—the regular stuff. Personally, I play a lot fantasy games like RPGs and such. Stuff like Final Fantasy and Gears Of War.

Does that come from some anger management issues or something?
[Laughs.] When I was younger, I used to go to a bunch of card shops and hobby shops. [There was a place] I used to go and rent computers. You could pay per hour and I would go there specifically to play Counter-Strike. Seriously, I would go there at 6 a.m. when it opened, and I wouldn’t leave ‘til 5 pm when it closed.  I would stay there all day and just play; I would spend tons of money on the computer.

What was the band’s specific role in the creation of Zombie Slay?
We originally hit up our management about it.  We were like, “We have this idea.  There’s a million apps in the app store, let’s create some sort of interactive application.” Echo Interaction Group came back to us and [asked], “Would you be interested in doing some sort of game?” We were brainstorming and they shot us back the idea of using the comic book [Zombie! The Comic] and do something based on that.  We shot ideas back and forth and eventually they gave us this concept.

We told them the ideas that we had.  We didn’t want [Zombie Slay] to be just a swiping game; we didn’t want it to just be a shooting game where you just tap. We wanted to mix the two. Eventually, we probably had 30 or 40 different builds to the game—different versions that did different things. Originally, there were [factors] in the game like distance where you couldn’t swipe the zombies unless they were close enough to you, and you could upgrade weapons that add more distance. I thought there shouldn’t be a distance [factor], because you’re not really sure how far the weapon goes. In the end, I thought the game came out pretty cool.

Was this something you were thinking of after the release of Zombie or during the making of Dead Throne?
We were definitely thinking about it about around the release [of Zombie], which was a long time ago.  I think we just didn’t know the right people to make the app.  We didn’t trust any of the people that we did know that made iPhone applications. We ended up getting Echo and we’ve probably been working on it for three or four months now.

As far as your input, you were incredibly hands-on about what was going on. You said you had 30 or 40 different builds. Does that mean that several different versions can do different things?
When I say 30 to 40 builds, I mean they would send us one at a time. [Each version] did all the same things; it just had to get refined more and more.  So they would send us one, we would play it, we would beat it and then we would tell [Echo] our problems with it, what we didn’t like and then they would fix those problems and shoot it back. This probably happened 30 or 40 times. I think I put that game on my iPhone more times than I’ve put any app on.

This game seems as though the Devil Wears Prada are expanding the notion of Zombie as more than just an EP. Was that the purpose of the game: to create a sense of community and perhaps another form of marketing for what the band does?
Yeah, that’s definitely part of the idea. The original idea was just kind of to have a platform to get our music out to people who don’t necessarily buy CDs anymore.  A lot of people don’t buy albums, so what else can you give them to still get your music out? Because all-in-all, the music is what’s important about our band, not getting a gold record. If people don’t buy CDs anymore, then what do they buy?  They buy t-shirts; they buy video games. It’s not about making money or getting them to buy it, it’s just about getting something to where they are getting something extra.

Plus, they are getting the CD: Every different level has a different song from the Zombie EP. You buy that game for two dollars and then you pretty much get a free Zombie EP with it.  But you’re right, it definitely does create this community because we made sure to integrate OpenFeint into it, which is a kind of game-center-esque leaderboard. When you’re playing it, you can see the other people who have the highest scores.

There are five levels.  When you play the first level and are killing zombies or whatever, it’s playing the first track, “Escape,” off the Zombie EP.  As soon as you get to that second level, it’s playing the second track. You can’t skip the levels; you have to play them in order, so if you don’t beat the first level, you don’t get the second one. I definitely think because it’s a game, people that don’t necessarily know or care about our band can also get involved because they could just be interested in straight-up zombies or that the app is number 50 on the games chart. I personally go into iTunes and download games I think look cool. Zombie Slay isn’t necessarily just for Prada fans, because technically, you could play the game on mute and it’s still a cool game.

So who’s the high scorer in the band?
I would say probably me. Seriously, I played it 8,000 times throughout the process.

You’re touring America at the beginning of November.
Yeah.  We are doing Australia and then we get back from that and going straight into the full U.S. tour with Whitechapel, Enter Shikari and For Today.

Do you think the other bands on this tour are going to be rocking Zombie Slay on their cell phones?
They better.  Anybody that has an Apple device and doesn’t have it on there, I’m probably just going to beat them up. [Laughs.] alt