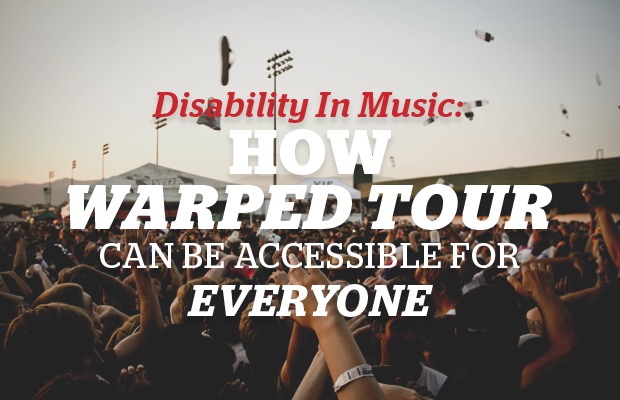 In the summer of 2012, I attended my first (and to date, only) Vans Warped Tour. Despite being a fan of much of the festival’s roster for years, it took me until age 17 to feel comfortable seeing most of them live over the course of one muggy July day. Having cerebral palsy—a disability that hasn’t defined me, only set clear limits on my balance and mobility—left me uneasy about entering the energetic, overstimulated crowd experience Warped seemed to promise. My theory wasn’t wrong. Leave it to me to eat asphalt during a Yellowcard set. Here’s what I didn’t expect: I was picked up off the ground by two concerned fans. Someone dusted off my glasses. The only injuries I sustained were inch-wide cuts on both of my knees. I had survived Warped, despite whatever my preconceptions led me to fear.

Warped Tour’s founder, Kevin Lyman, has been on the road with large-capacity summer festivals since 1993—first with Lollapalooza, then as the ringleader of his ongoing musical circus. Even though Warped has exploded in popularity and reaches 42 unique venues countrywide every year, there’s always a desire to improve the fan experience. Luckily for me and many others with mobility issues, from disabilities or otherwise, one of those improvements includes accessibility.

As Lyman and many Warped veterans know, “everywhere we go, things are different.” Yet, there’s always a desire to adapt to make everyone have an enjoyable day. “We have a policy where if we see anyone with disabilities, they end up getting extra passes…to get them backstage. We do the best we possibly can.”

Attendees who need more accessibility can email Lyman directly here with the Warped date they plan to attend in order to secure this extra boost. Lyman also has stage managers who travel around with plenty of extra wristbands on hand in case someone forgets to email their request before the gates open. “We’re not perfect—I don’t know if anyone’s perfect at doing this—but we try our hardest…Warped Tour is a place where a lot of kids with mobility issues and disabilities like to come to because they’re accepted,” Lyman says.

Warped Tour’s climate of acceptance is bolstered by a staff that continues to promote the festival’s ideals alongside charitable organizations. “We don’t tout things we get very often, but we were one of the celebrity partners for Make-A-Wish last year. We donate all the money from our bowling tournament to Living The Dream Foundation. We bring kids with mobility issues and illnesses out to the shows and give them a special day,” he continues.

That being said, Lyman and his staff continue to improve accessibility at Warped. “We understand that we’re all so very lucky that we get to do what we do. But we’re always trying to do better,” Lyman says. One of the ways Team Warped has enhanced the experience for the 2015 season is by having private accessible bathrooms to keep those with physical challenges clean and comfortable. This new addition is one that may usher in others, given the tour’s constant need to accommodate varying locations and vendors. “When you’re at a big festival for three days, you have time to build it. Warped is on the move all the time. Some of the venues are really great; those amphitheaters work really well. But if we’re in a field, we’re going to put more plywood down so a wheelchair can roll on it. We’ll have a list of access to more things if we need them; we rent them locally. [But] we can’t change the weather. It’s gonna be hot,” Lyman says.

Temperature isn’t the only thing that can’t be changed during Warped Tour summers. It’s no secret that crowds can get unruly, especially during longer sets which require more of an audience’s endurance. While Warped may build its stages on solid ground one day and uneven terrain the next, Lyman and his crew try to curb some of the chaos across all the tour’s varying environments. In 2014, they raised banners that seemed to forbid moshing and crowd surfing. This new policy wasn’t set in place to silence the action, but to encourage safety and accountability between bands and fans alike. “Kids are gonna do stuff because of the music. They get excited. We were not throwing people out because of those signs. I’m trying to instill in people’s minds that there needs to be some responsibility on everyone’s part.” This responsibility doesn’t stop in front of the stage. Lyman expects it from everyone.

No moshing—which came as a shock to the members of Warped’s more active crowds—spearheaded a movement to make the tour more accessible to all of Warped’s attendees. Lyman likens this to his earlier choice to make free water available at all tour stops, a campaign he began for everyone’s benefit. This initiative to demonstrate care for all tourgoers was adopted by other summer music events after Lyman’s successful plan. With that logic in mind, does last year’s signage promise a more aware Warped Tour public?

Lyman has faith in the family his summer stage show has created, stating its members are “smart kids” because “it takes brains to go to Warped Tour…you have to plan through your day.”

That help doesn’t just extend to only those holding backstage passes. As I learned through my own Warped experience, compassionate action can be just as simple as helping someone up who stumbled. But, the extra attention Warped’s cast and crew gives to those who carry the added weight of physical struggles can be ultimately practiced by any fan watching a band. Just as Lyman doesn’t look at people with disabilities any differently, Warped Tour’s open atmosphere attempts to encourage togetherness, a process that’s been evolving for over 20 years. During that lifespan, Lyman has remained confident in his tour’s impact. “I’ve met tons and tons of great kids. It’s the one show that they feel they can come to, have a great time and feel like people will be there to help. That could make their whole day, more than seeing any band.”

While Warped Tour 2015 does promise an abundance of live music, comedy routines, and of course, raw energy, it’s important to remember that power doesn’t just come directly from a stack of speakers or an arsenal of instruments. It comes from the wide spectrum of people Warped has been able to bring together. Lyman’s festival may have a few more hiccups in its road, but for now, that road still has ramps.

Until your date rolls around, Lyman encourages the same openness leading up to the event as he does at each stop. Don’t be afraid to reach out via email or Twitter, for he believes that “keeping an open dialogue is the best way to do these things.” Keep working to make Warped Tour a better place—together. Regardless of where we’re at in this process by the end of the summer, one thing’s for sure: I’ll see you at the show.