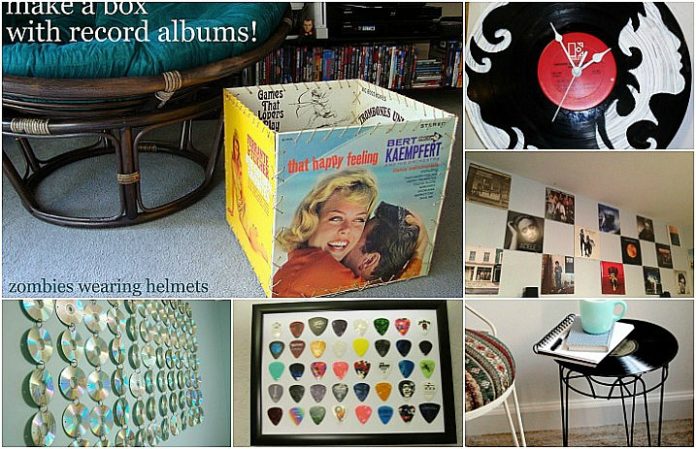 A college dorm is the place to finally express yourself—with as many Command hooks as you can possibly find at Target. Listed below are 10 DIY decor ideas that show off your love of music while staying under the guise of those finicky dorm policies.

[Photo by: Creative Me Inspired You]

There’s no reason your old CDs should hide away in a drawer. Use Creative Me Inspired You’s CD hanging tutorial to create some amazing wall art (each column of CDs could be hung with a Command hook rather than a nail).

There’s only so much desk and shelf space in a dorm. Keep your textbooks organized among the clutter by creating simple vinyl bookends with blogger Amy Lulita’s tutorial.

[Photo by: The Casual Craftlete]

Display your love of Sleeping With Sirens with The Casual Craftlete no-sew tutorial for an awesome mousepad. Instead of using the craft store fabric mentioned in the tutorial, use an old band T-shirt’s fabric.

[Photo by: Stars For Streetlights]

Revamp your school supplies by creating a vinyl notebook using Stars For Streetlight’s DIY tutorial, which includes a step-by-step instruction video to walk you through the process.

If you’re not interested in cutting up and transforming your vinyl anytime soon, here’s a cool and easy idea to display them instead: Simply put four Command hooks on the wall to create a frame for the vinyl and then slide it through, allowing you to admire the album covers and easily remove them to play at the same time.

If you’re always that lucky one who catches a guitar pick at shows, this one’s for you. Instead of just keeping them tucked away, create a guitar pick frame like the picture above and hang it on your wall with Command hooks.