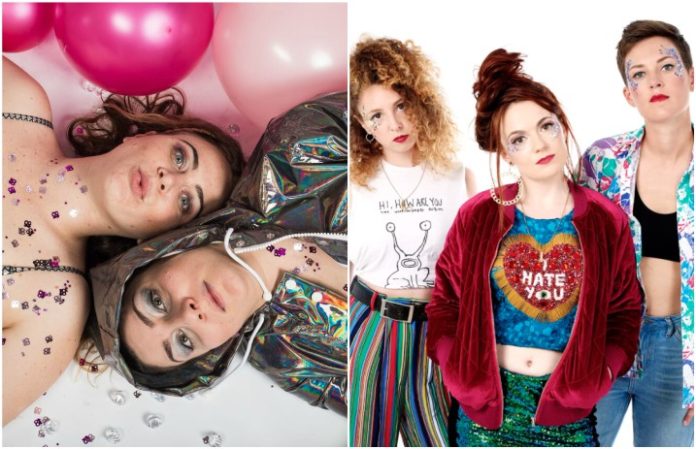 The patriarchy weaves a plethora of tall tales to keep its ego in check and the biggest of those is that women can’t stand each other. Even when we were pitted against each other by repugnant, morose men, we didn’t really want to tear each other’s eyes out.

Read more: Why men, including WTK’s Travis Clark, are painting one fingernail in October

In reality, you couldn’t find a better example of a deep bond than the one that exists in female friendships. Women are there for each other with a shoulder to cry on or a knowing piece of advice when you need it most. Nowhere is this seen more strikingly than in the music industry. We speak to some of the leading figures in the DIY U.K. punk scene to find out how their revolutionary girl gangs are tackling inequality in the scene and putting female friendships to the forefront of their work.

There always have been girl gangs in the scene. Post-punk godmothers the Slits scared the stuffing out of the average Brit as they roamed the streets draped in torn dresses and ratty bouffants. Riot Grrrl gave women an entire scene to take over for themselves and talk about feminist issues. Today, punk bands are taking the baton from their foremothers and pushing it even further with challenging rhetoric, electrifying music and life-changing activism.

When it comes to girl gangs, Dream Nails are living that life. The all-female Riot Grrrl-influenced trio have only been around for a few years but have already taken over releasing songs about astrology, activism and hexing Donald Trump during the presidential election. At the center of their work, though, is their never wavering friendship.

“Being in this band is like being married to three women,” explains Dream Nails singer Janey Starling. “We tour a lot so [we] are living in each other’s pockets and have become like sisters now. We giggle so much and create so many band in-jokes it’s like our own world, Dream World.”

The band come as a package and are rarely seen without each other; it’s a bond the three are all too aware of as guitarist Anya Pearson explains: “Someone overhearing me and Janey speaking in a bathroom at a gig once commented that we literally have our own language. There’s a particular type of person who can penetrate Dream World, but we welcome you with open arms if you can get as loose a grip on reality as we have.”

The only other band to rival Dream Nails’ girl gang aesthetic are South East London’s Charmpit, a bubblegum, diva-pop mish-mash of anarchist ethics with adorable sing-along numbers. Bassist Anne Marie Sanguigni and guitarist Rhianydd YorkWilliams have been “best femmes” (as they like to call themselves) ever since they met at University of California almost a decade ago. Together, with drummer Alex Lossifidis, they make surf-pop songs that instantly turn any dank English pub they happen to be playing into a Californian beach resort. The pair see their friendship as integral to their songwriting and make sure to give each other enough attention by recalling their favourite quote from Josie And The Pussycats: “Friends first, band second.”

“If our friendship is strained for one reason or another then we can’t really write properly, so it’s quite important that we hang out and make sure things are good,” says YorkWilliams.

Sanguigni comments that society’s definition of friendship is far too limiting for what they have. “It’s not just romantic or platonic, there’s so much in between. We definitely give as much love and care as we do to our romantic partners. That’s already the strongest relationship in a lot of femmes’ lives just because of how femmes have to survive.”

Much like riot grrrls of the ’90s, Charmpit and Dream Nails love celebrating the most derided aspects of girl culture. Whether it’s sleepovers, openingly loving pop divas like Cher or slathering themselves in brash colors, glitter and sequins, neither Dream Nails nor Charmpit shy away from centering femininity in their world. Their outward approach is a reflection of how proud they feel about being in a female-centric band.

“My background is in feminist direct action that doesn’t involve men, and there’s a magical power that brews in all-female spaces; and when you collectively unleash it, you become unstoppable,” says Starling.

That magical power can only happen if there’s a space where bands like Dream Nails and Charmpit can thrive. That’s where promoters such as the Loud Women collective come in. With organizer Cassie Fox at the helm, in two years, Loud Women have established themselves with an annual festival and organized numerous gigs that have launched the careers of all-female bands like Dream Nails.

Creating a space where women can feel comfortable is important to both Charmpit and Dream Nails. Charmpit are key members of London’s First Timers event and also started at a First Timers event in 2016. First Timers is an annual event that encourages marginalized music lovers to take up space and create a band. Dream Nails also do a lot for their local community as part of feminist activist group Sisters Uncut.

Although both bands engage in large-scale activism, they still have time to help out in small ways: “When we don’t play a gig, we don’t just say ‘no,’ we also send a list of people they could ask,” says Sanguigni. “Anytime we feel we’ve gone up a rung, we’re definitely grabbing our hands around to bring other people up with us.”

The scene is far from perfect as the in-it-together attitude can often be seen whenever a scandal becomes public. There have been numerous outings of abusive men in the punk scene in recent years. Last week, a group of women released a crowdfunder to raise money for legal fees to fight a defamation case brought to them by a well-known, unnamed male musician. The women are being sued for making public statements about the musician’s treatment of women. Despite being sued, the women are continuing to fight, stating they “do not want our case to set a precedent for silencing marginalized voices in the music industry and beyond.”

Both Dream Nails and Charmpit were frustrated that on top of creating music, women also have to be responsible for the scene, but they knew for now not much was going to change.

“It’s always down to women,” sighs Starling. “We know how real the risk is and how bad the pain is. We have to look out for our sisters and not tolerate any abuse — and stand in solidarity.”

Watching these groups laugh, create, cry and live life together is a reminder of why the connections we make are so important. When we’re together, we feel like we could accomplish anything. We could be happier than we’ve even been before or reach goals we never thought would be possible.

Charmpit put it best in their call-and-response way of speaking: “We love calling DIY music DIT music or ‘do it together,’” says Sanguigni, barely getting her last word out before YorkWilliams slides in to finish her thought process: “Cause you can do it yourself, but it’s more fun to do it together.”

Dream Nails’ Dare to Care EP is out Oct. 27. Charmpit’s latest release Jelly is out now on Keroleen Records. Loud Women’s next gig is Nov. 3 at The Unicorn in London.