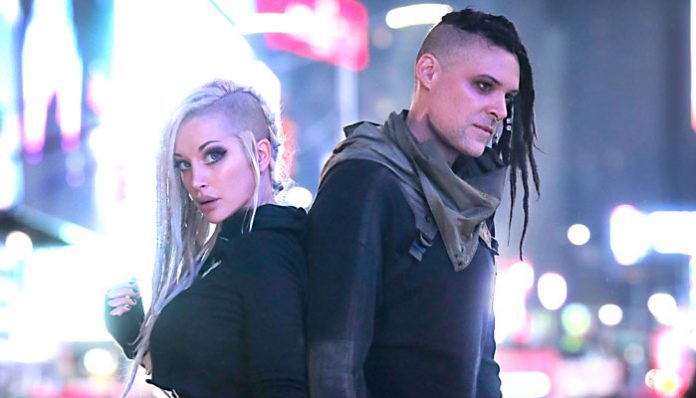 Over the decades, industrial rock has frequently decried mankind’s greed and ecological destruction. In 2020, as we’re facing corporate interference and coronavirus, the Los Angeles duo DK Zero are keeping the fury alive with “Switch Me On,” which Altpress is premiering today.

Five years ago, frontwoman Kato and multi-instrumentalist D-Punk met each other while active in the steampunk scene. (D Punk was a member of acclaimed outfit Abney Park). A mutual love of industrial, nu metal and EDM made their synapses tingle, so they decided to act their rage. Their 2018 debut, From Nothing, brought the noise, drawing equally from their influences while still feeling like 2025.

D-Punk discussed the origins of “Switch Me On” and how it fits in the context of DK Zero’s impending concept album, Cyber Sex Inc. He feels confident that with the state the world is in, this is the music DK Zero should be making.

You’ve got your steampunk bona fides in order. How did you both arrive at DK Zero several years ago? There are theoretical ties between those subcultures, but the sonic ones are definitely extreme.

D-PUNK: Kato grew up as part of the nu-metal generation. She was a huge fan of bands like Static-X, [Marilyn] Manson, Korn, System Of A Down, Powerman 5000. I came from more of the old-school generation of industrial rock: bands like Nine Inch Nails, Ministry and Skinny Puppy. When we met, we were both going through crazy breakups and found some emotional solace and inspiration in this style of music.

Even though we were in the steampunk scene—which is sonically really different—we wanted to write music that had the energy of some of the artists and bands we were listening to at the time. It came really naturally. We didn’t really think about it. We just wrote and that’s what came out. Being huge fans of the sounds and the energy of industrial rock, we feel really at home here in this scene.

Read more: Here’s how you can get dark mode on Facebook’s new desktop site

What is the message of “Switch Me On?” Is it a small part of the overarching concept of Cyber Sex Inc., or is there a bigger context as an individual track away from the rest of the album?

Imagine a dystopian future. Corporations have done enough human gene testing that they have figured out a way to “breed out” the ability for the average person to feel much of anything at all sexually. The only way people can enjoy sex is by purchasing a pill or multiple pills from the company Cyber Sex Inc. People essentially have to wait in line and spend most of their money on pills to “get off.” That song set the theme/concept for everything else on the album.

There is an underground futuristic Cyber Sex pill dealer who happens to be a woman. She sells blue pills and red pills to people looking to get off and save a little cash. She, of course, gets rich in the process and becomes a Boss Lady. So when she sings, “Blue pills red pills, give me all your dirty money,” you can imagine a futuristic cyber-boss lady babe surrounded by men and women, selling sex and getting people off while also being a complete badass.

Read more: You can buy Nine Inch Nails merch from the tour that didn’t happen

“Switch Me On” is about getting turned on and having the ability to feel something, anything at all. Because she is a woman, it’s about female empowerment and subversive action against the corporate powers-that-be. All this is portrayed in the music video as it ties in with the overall concept of the song and the album. You will see this same theme carried over to our next single, “Replicate,” but in a different way.

Decay and ruin have always been common themes in a lot of classic industrial rock.  In your eyes, do you think this genre is truly a front-row seat for the apocalypse? Does heavy electronics-based rock make more sense than it ever did right about now?

I think heavy, electronic-based rock makes so much sense right now. There are artists out there who’ve been pioneering this sound for years and they are more relevant than ever. There’s a lot of pent-up energy in the world that people want to release, and this genre definitely has a front row seat. I put together a Spotify playlist called “Industrial Quarantine.” It features a lot of bands that represent the feelings of what’s happening right now in the world from a genre-specific perspective.

Timing-wise, it is pretty crazy. We actually filmed everything just before the pandemic hit a week-and-a-half before, so we got pretty lucky. We were in L.A. getting our initial shots on location March 6. The white cyber-living room shots for the video were filmed on March 7 in our house. And we started seeing pandemic lockdown news around March 14, 15 and 16. So we really did just sneak it in under the radar.

Check out “Switch Me On” below. Preorder Cyber Sex Inc. here.